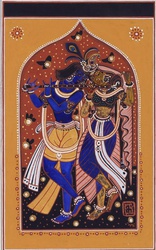 The gorgeous Krishna fluting with Radha incorporates the village ideal of his time in Santiniketan with Rabindranath, which was much more part of his mature artistic vision. The format of the niche hearkens to his important work with the Haripura posters made for the Haripura Congress, in which the ideals and occupations of village India were foregrounded.

Born in 1882 in Bihar, Nandalal Bose studied at Government College of Arts and Crafts, Calcutta. He studied under Abanindranath Tagore and was also influenced by E. B. Havell. His works had a sense of nationalism as well as an integration of classical and folk art from India. He was the principal of Kala Bhavan in Santiniketan where he taught several students. His personal style was influenced by the Mughal and Rajasthani miniatures, Japanese washes as well as impressionist and expressionist figurative and landscape works.

Nandalal’s wash paintings are all from his very early period in Calcutta. Some of them he re-made in the 1930s after many of them were destroyed in a shipwreck on route to Japan, so most of the wash paintings from after 1916 or so are not such authentic examples of the early work anyway. In those, he was still very much working in the shadow of Abanindranath, so they are indeed classic Bengal School works, but they are not necessarily the most representative of Nandalal’s vision. After he left Calcutta, his work radically changed to a new vision, which found expression in a wide variety of styles.