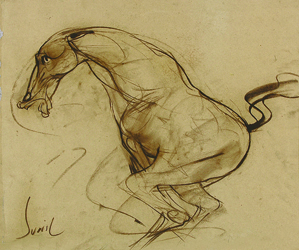 CATALOGUE NOTES
Born in Bengal in 1939, Sunil Das is well known as an expressionist painter. He studies at the Government College of Art & Craft, Calcutta in 1955 where he got a chance to study at the École des Beaux-Arts in Paris. As a result, he was able to travel around Europe and happened to be in Spain where he saw a bull fight. It was then that he developed a passion for drawing horses and bulls. His works have also been influenced by his study of sculpture and structure of bodies.
Previous Lot Next Lot Back to lots