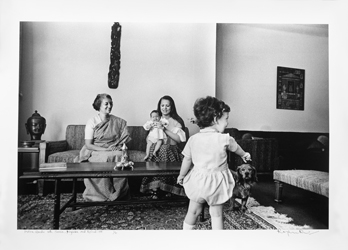 PROVENANCE
Acquired directly from the artist
CATALOGUE NOTESOften referred to as the father of modern photography, Rai first picked up photography in 1965 when he borrowed his first camera. It was only after he joined The Statesman in Delhi as a photographer that he started photography as an art form. There, he worked on special issues and designs, contributing trail blazing picture essays on social, political and cultural themes, many of which became the talking point of the magazine. Raghu Rai’s strong points are his perspectives and his power of envisioning an image. He had the ability to trap viewers' attention; he documented the plight of Bengali refugees during the Liberation War and the victims of the Bhopal Gas Tragedy amongst others.
This work manages to document his early recognition as an important photographer and his access to important political figures of that time. Edition 1/10
Previous Lot Next Lot Back to lots