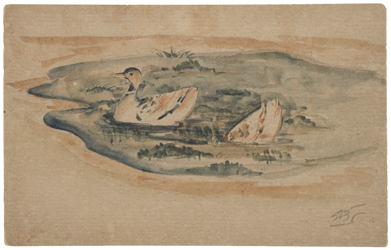 PROVENANCE
Estate of Pulin Behari Sen
CATALOGUE NOTES
Born in 1871 in Bengal, Abanindranath was the nephew of Rabindranath Tagore and brother of Gagenendranath Tagore. He studied at Sanskrit College in Calcutta which was founded under the recommendation of James Prinsep. Abanindranath was known for developing modern art in Indian painting. As an important figure in the Bengal school of art, he brought a revival in Indian art where he brought back mughal miniature and rajput styles in response to traditional western academic standards. He founded the Indian Society of Oriental Art and often incorporated elements of Chinese and Japanese calligraphy in his own works.
Previous Lot Next Lot Back to lots