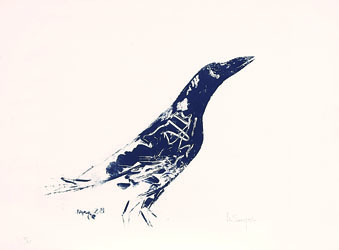 PROVENANCE
Private Collection
CATALOGUE NOTES
edition 21/21. Bhabesh Sanyal was born in 1901 at Dhubri, Assam and earned his diploma in Fine Arts from Government College of Art and Craft, Calcutta in 1928. He was commissioned to make a bust portrait of Lala Lajpat Rai for the Indian National Congress Session of 1929 in Lahore, a commission and a work that became a turning point in his career. With similar commissions, he stayed back in Lahore and joined the faculty of the Mayo School of Art in 1929. However over time his ideas and practice came into conflict with the colonial authorities of the school, leading to a situation that forced him to to leave the institution in 1936. Soon after, he arranged for a studio space and launched his own institution called the Lahore School of Fine Arts. However, his life at art school soon came to an end with the partition of 1947. He moved to Delhi where he continued his passion for shaping art education and for bringing together a new artists’ community. Within a few months of Independence and Partition, the Delhi Shilpi Chakra was founded by Sanyal. As an artists’ collective, it echoed the dreams of a new independent nation and secured for itself a landmark place in the history of modern Indian art. In 1953, Sanyal joined as the head of the art department of the Delhi Polytechnic, that would later become the Delhi Art College. He was a teacher and initiator all his life, inspiring students with his paintings and sculptures centred around the theme of human struggles and of economically marginalised section of the society. His works depicted human conditions and explored nature in ways which deeply impacted artists of his own and following generation. His use of colours were primary, fresh and vibrant, and his compositions orderly, much like his personality. He created his own unique free style which didn’t owe much to western academic norms or to the pattern of regional aesthetics.
Previous Lot Next Lot Back to lots