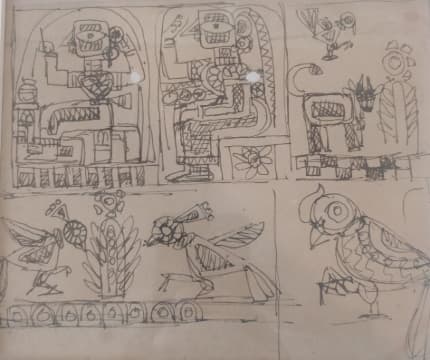 PROVENANCE
Jamini Roy\'s Estate
CATALOGUE NOTES
NATIONAL ART TREASURE - NON EXPORTABLE ITEM
In the 20th century, the political environment in India resulted in nationalist sentiments which saw a movement where artists decided to look east. In the midst of this, some modern artists like Jamini Roy, turned to their roots to imbibe aspects from indigenous arts. Roy sought inspiration in Kalighat pats to develop his new style. Kalighat Pats were local to the Kalighat Temple in Calcutta and often depicted scenes from there. Here, we can see a sketch made on paper in the Kalighat Pat style of drawing. The two dimensional and profile view are typical in Roy’s drawings

This lot has zero buyers (or sellers) premium. ALL PROCEEDS TO CHARITY