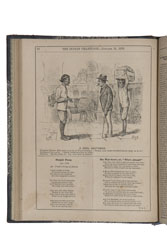 PROVENANCE
From an esteemed private collection
CATALOGUE NOTES
NON-EXPORTABLE ITEM.
The Indian Charivari was a magazine that was founded in 1872 as an illustrated paper that reviewed current political and social topics in a playful spirit. Often referred as the Indian Punch magazine, it had caricatures of statesmen, military and public figures in India along with information about them. The magazine used parody and witty caricatures in their text and images to express their views on Indians and the British at the time. This lot consists of five volumes of the Indian Charivari publications and an additional Indian Charivari Album.