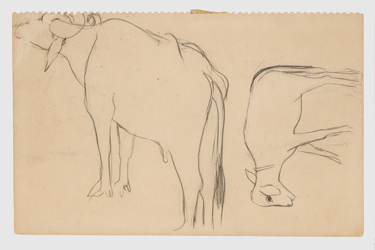 PROVENANCE
Originally acquired from Chatterjee & Lal
CATALOGUE NOTES
NON EXPORTABLE - NATIONAL ART TREASURE
Born in 1913 to a Sikh father and a Hungarian mother, Amrita Sher-Gil’s lived in between Europe and India. In 1929, she joined the Ecole des Beaux Arts in Paris. Sher-Gil’s painting style at the time was reflected in its naturalism and textured application of paint. Many of the paintings done in the early 1930s are in the European style, and include a number of self-portraits. There are also many paintings of life in Paris, nude studies, still life studies, as well as portraits of friends and fellow students. Of these, the self portraits form a significant corpus. Her style underwent a radical change by the mid- 30s when she moved to India. Her works set in India were influenced by colours, textures, and the people which had a deep impact on the young artist.