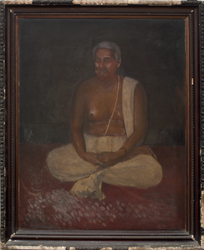 PROVENANCE
Geeta Chatterjee (By descent from Ananda Kumar Chatterjee).
CATALOGUE NOTES
NON EXPORTABLE - NATIONAL ART TREASURE
Jamini Roy who was trained as an artist at Calcutta Government Art School started off as a portrait painter. His academic style painting was initially a great source of commission for him. Later, his styles saw him challenge what Indian artists considered as art. He defied norms at the time and reject western ideals of art and brought back folk art (pats) in his style.
This is the portrait of Anand Kumar Chatterjee, landlord of Jamini Roy's Bagh Bazar residence. Jamini Roy saw his initial successes in this house. This was the house where Rabindranath Tagore and Marie Casey (wife of the then Governor General) had visited him.
In a visit to Jamini Roy’s Bagh Bazar residence Prinseps had stumbled on to Geeta Chatterjee by sheer chance (also on Ananda Kumar Chatterjee Lane – right across from Jamini Roy’s erstwhile residence). An extremely refined and elderly lady with whom we spent a better part of an afternoon. These portraits(of the landlord, his son Tarek Nath and grandson Bani Nath) were sold by Geeta Chatterjee's late son to his friend and photo studio owner across Scottish Church College. Photographs of these portraits still hang in Geeta Chatterjee's residence as remembrances/mementos from history (Photographs from our time with her and of these mementos on her residence walls are available on request)
Portrait of Ananda Kumar Chatterjee's grandson has separately made it to auction - 'Bani Nath Chatterjee by Jamini Roy' - Bowrings 2002. Also see portrait of Hara Kumar Sarkar by Jamini Roy at the Indian Museum.