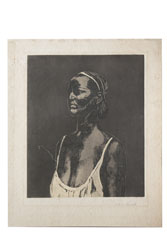 PROVENANCE
Private Collection
CATALOGUE NOTES
Bikash Bhattacharjee was born in Kolkata in 1940. He graduated from the Indian College of Arts and Draftsmanship, Kolkata in 1963. His works were inspired by his early childhood and his environment. His subjects were portraits of people from a politically charged atmosphere of Kolkata and were often representatives of their class and included depictions of the female form. Realism being Bhattacharjee’s forte, he could depict the exact quality of drapery or the skin tone of a woman and captured the light perfectly making the canvas come to life. His paintings showed the struggles of poverty and socio-economic unrest that surrounded him. Bikash Bhattacharjee made very prints in his life making this lithograph a rare one.
Previous Lot Next Lot Back to lots