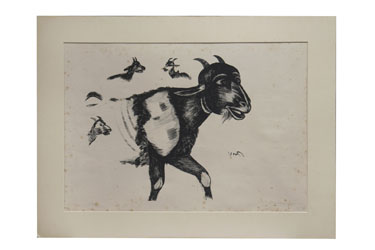 PROVENANCE
Private Collection
CATALOGUE NOTES
Artist Proof 4/ 27 written lower right.
Born in Kerala in 1924 studied economics at Presidency college in Madras before he turned to art. He was actively involved with the freedom struggle during independence and was known was his Gandhian ideology. He studied in Kala Bhavan in Santiniketan under the Nandalal Bose, Benode Behari Mukherjee and Ramkinker Baij. Subramanyan was influenced by folk art like Kalighat and Pattachitra as well as Indian court painting. His works often depicted Indian mythology which he contrasted with other figures.