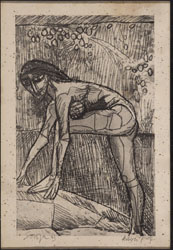 PROVENANCE
Originally acquired from Dhoomimal Gallery
CATALOGUE NOTES
Francis Newton Souza was born in 1924 in Saligao, Goa. Souza was expelled for participating in the Quit India Movement while studying at the Sir J J School of Art in Mumbai. In 1947, he founded the Progressive Artists' Group along with S H Raza, M F Husain and K H Ara, among others. Souza's style created thought-provoking and powerful images. His repertoire of subjects covered still life, landscape, nudes and icons of Christianity in a distorted form. In his drawings, he managed to capture fine detail in his forms. He also used a combination of crosshatched strokes that made up the overall structure of his subject. "Artist proof" written lower right.
Previous Lot Next Lot Back to lots