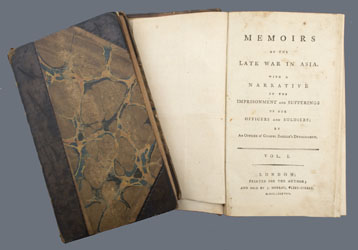 PROVENANCE
Private Collection
CATALOGUE NOTES
NON EXPORTABLE ITEM
Two Volumes
Printed for the author; and sold by J. Murray, Fleet Street, London
Narrative of the Imprisonment and Sufferings of the Officers and Soldiers under Colonel Baillie's Detachment. The detachment was captured by Hyder Ali and taken to Srirangapatnam. The fort, palace and the place where these men were imprisoned are shown in the map which forms a very important piece of information, considering the ramparts of the fort, the destroyed palace of Tipu Sultan, and batteries and magazine stores, and the mint which stand testimony to the Dominion that once was, and to this day can be evidenced to this map.