Lalitha Lajmi's notes on Guru Dutt and her childhood

Lalitha Lajmi an Indian painter recalls her childhood days and memories with late filmmaker and brother Guru Dutt in these handwritten notes. These notes give us an insight into the influences that led her to nurture her passion for art and cinema. Read on to know more.

"Many memories flash back to the Calcutta days when we were children living with our parents near Paddapukur Tank, a family of 4 brothers and I am the only sister. Both Guru and Atma went for a swim at the Padupukar tank and I watched them sitting on the grass. The same place had Parish Mela once a year with fascinating Jatra plays performed all night. At the mela they sold earth red clay figures, delicately painted pottery, wooden dolls, birds, and animals in red, yellow, black, and green. Alta, the red liquid used on the feet of women, and sindoor were also sold in little red boxes. The Baul singers used to come to our doorsteps singing beautiful devotional Bengali songs. My grandmother would call me to give them a hand full of rice. There are faint memories of travelling on the train to Dharmatala street with my grandmother. The long journey and watching cinema posters. My uncle Mr. Benegal was an established artist who had a small office working on cinema hoardings and publicity for several theatres in Calcutta. Hence he could get is passes for films, sometimes 3 or 4 films in a day. So we were exposed to Prabhat Films, New Theatre, and English films. My uncle had an old gramophone which one had to use by hand and my aunt was passionately fond of Bengali and classic music. He also was a keen photographer and made home movies on an 8mm camera. Perhaps these memories were still so strong for Guru that he imbibed all these early influences from Bengal in his films. In Pyaasa, the scenes of low terraces, the Baul singer singing Aaj Sajan Mohe Ang Laga Lo, the Hooghly River, and the sleepy boats in the stark key background when he is sleeping on the beach are nostalgic of the old days. 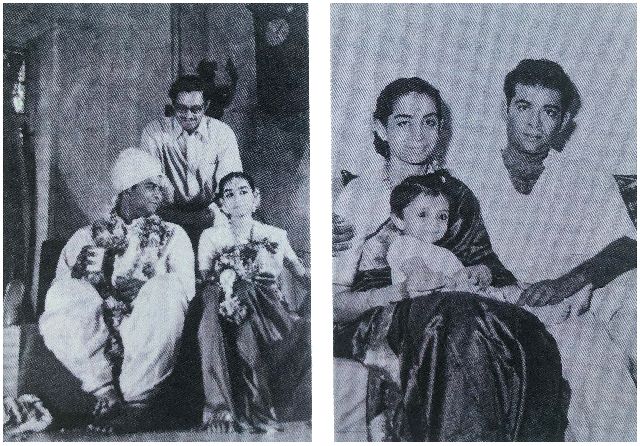 As a young lad of 14, he was very fond of dance and I have some vague memories of peeping in and watching her do the shadow play in my grandmother’s room, late in the evening where our deities were kept and the lamp was lit up. This very shadowplay was used in a dance sequence of Minoo Mumtaj in Saheb Biwi Aur Gulam where the play of light and shadow with the group dancers was unique. There is a strong graphic quality etched on in several scenes of Pyaasa, Kaagaz Ke Phool and Saheb Biwi, and Gulam where he stands on the balcony at the entrance with backlighting like Christ with his hands stretched out and the mobs below asking for his identity with the famous song Jahan Pyaar Hota Hai. In the climax when Mala Sinha confronts him to accept fame or success, he wants to remain anonymous which is highly philosophical and society puts up a mere mask of human faces. (Isn’t this ironical that he almost predicted his own future?)

I remember when he first arrived from Almora, Uday Shankar Dance Academy, his creation of the Swan dance, performed at the Excelsior theatre, my mother met Uday Shankar backstage after the performance and he told her that Guru was exceptionally creative and talented.  It is at Almora, that he found the totality of expression. When his first film Baazi was signed for Navketan, we were living in a small two-room in Matunga. My parents were struggling, my father a clerk at….and mother a teacher and Guru too. At the first song recording of Baazi,  we met Geeta who sang Tadbir se bigdi hui at the Famous Cine Lab. Geeta Roy was then a famous playback singer at the top of her career. They fell deeply in love and he would listen to Geeta’s Bengali love song again and again on a borrowed gramophone from my friend, the words were Tumi Jodi Bala Bhalo Bhasha dite Jamina. ( I played cupid by delivering their first love letters as a younger sister) On an off day from shooting, we used to have a few happy moments. So far picnics at Powai and Pokhan Lake with Guru, Geeta, Raj Khosla, and myself. Geeta and Raj would sing throughout the journey. There was constant friction between my parents at home though both were extremely talented writers my mother wrote in Kannada and my father was an intellectual who wrote verse in English and could fluently quote Shakespeare. When I think of the past I wonder how many times my father and Guru must have missed an afternoon meal so far my father would take half a rupee to Ballard Estate and Guru a rupee to the studies. 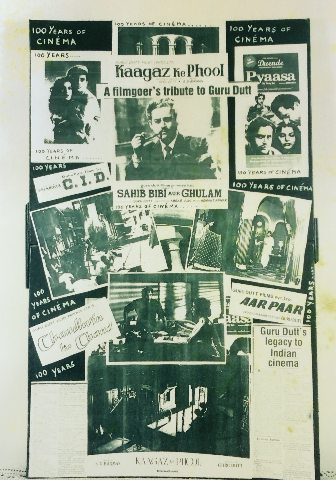 Pyaasa was named Kashmakash when he first wrote the script. He was jobless for almost a year during the slump in the film industry. He wrote a great deal those days; many scripts and short stories which he sent to the Illustrated Weekly were rejected.

The first time I went to see a film shooting was in Poona as a little girl when he was working as an assistant at Prabhat Studios. I met Dev Anand too for the first time. When Geeta became close to us. I went to see his shootings several times. I remember attending a whole night shooting of Jaal, a scene on the balcony was Geeta Bali standing and the famous song of Hemant Kumar Pighla hai sona being played. Those days Geeta Bali, Dev Anand, Sapru, Ram Singh, and Balraj Sahni visited us at Matunga. Later while shooting for Mr & Mrs 55, Guru came home to Colaba with Madhubala for lunch, during the tennis court scene. Waheeda Rehman lived in Colaba close to and almost every evening we met after the shooting of Choudhavi ka Chand.  I remember the first ….I had when Geeta told me Guru was going to act in the main lead in Baaz.

As time passed, Guru became serious and aloof, deeply involved as a filmmaker. He worked on several films and left them unfinished even after completing 12 reels. One was Raaz and the other Gauri in which he had taken Geeta, shot it in Calcutta, and also other projects. He could not take failure. When Kaagaz Ke Phool failed he lost confidence in himself and he refused to give his name for his later films. He would often go into the depths of depression. He was a voracious reader in English, Hindi, Urdu, and Bengali. The collection of his books had a range of subjects in History, Literature, Philosophy, Anthropology, Photography, and Urdu Poetry. This part of him was definitely from my father. (my mother reads Hindi, Marathi, Kannada, and Bengali even today. ) Many have asked me what would have happened had he been alive today? He was a sensitive filmmaker, who knew the grammar of cinema and if in a span of 9 years he could create poetry on celluloid, then he certainly would have grown into a new way of thinking in terms of cinema. Those days there weren’t young critics who could have discussed with him on his works. One must be grateful to the French Director or/of  Alliance Francais Mr. Henry Miccilio that his work was exposed in France and later in the USA and other countries. Today he is a legend and remembered for his work even after 25 years of his death. Sometimes I wonder whether he knew how destiny would change. He spent all his intensity in the short span of life!

There are some incidents that happened many years ago, that perhaps would have changed the whole course of my life and profession twice. The first time was when Guru helped a ballet dancer backstage with makeup for the Discovery of India organised by Rajen Shankar, Laxmi Shankar, and Ravi Shankar. It was a large group of dancers and a huge project of dance ballet and I was very keen on dancing. Guru took me one morning to the suburbs to introduce me to them. I remember we sat enchanted with Ravi Shankar who was doing his riyaaz on his sitar. I was just 14 then and they were planning to put me on the payroll. Those days Guru was having no work and after we returned home he changed his mind and told me I was to not join, he didn’t want me to be another bread earner at that age. Then the second time, I was 16 and he was planning Baazi with Dev Anand and wanted a young face. He took me to Kamala Nehru Park for the stills and took so many photographs from different angles and then dropped the whole matter. So because I was not destined or may not have been a good actress, and today I paint, far away from the Performing Arts. Though I have given my first performance in classical music in Calcutta at the age of eight at a small Saraswat gathering. Then later I learned a little about Manipuri dance and Geeta sang for me while I gave performances in the school of Art while I was studying Commercial Art.

Much has been spoken about Guru’s personal life and conflicts. He no doubt had a stormy life or else he wouldn’t have made so many attempts to end himself. It was like burning himself creatively with his inner conflicts until one morning the end came and the stunning news of his death left grief and trauma in our lives. My mother who is 83 years old lost her firstborn and her favourite child."

An interview with Lalitha Lajmi