An interview with Lalitha Lajmi

A ray of light enters Lajmi’s room and falls on a half-painted canvas. The artist’s room is dipped in evening hues as twilight knocks on the door. Brushes stacked in paint holders stand in awe-filled unison like silent spectators as unsuspecting Lajmi continues to paint into the night. Seated on a wooden chair propped up on two cushions, Lajmi’s creative spirit knows no rest. Lalitha Lajmi’s nocturnal artmaking which was first born out of necessity is now a habit she has woven into her creative process.

The walls are defining spaces in Lalitha Lajmi's living room that speak volumes about her creative personality. Behind her rocking chair, you see a universe of books that reflects 89 years of Lajmi's life. Art and artistry remain confined within Lajmi's gorgeous suburban apartment. Her paintings and some of her late daughter Kalpana's works adorn the walls of her home. And amidst it all, in her rocking chair that creaks with wisdom; sits Lajmi, draped in a gorgeous saree eager to answer your questions.

I was born and brought up in Calcutta. My uncle B.B. Benegal was a commercial artist and painter at that time. He gifted me a box of paints when I was just five years old, and that was the beginning of my artistic desire. He did not just encourage me but also my brother Guru Dutt to pursue our dreams. When we moved to Bombay from Calcutta, I began studying commercial art at the J.J. School of Art. However, I got married very young. After that, I did not really have the time to follow my interests for a while. I was still very keen to practice art and once we moved from Matunga to Colaba, I slowly began to see art exhibitions on my own. I was completely swept by the arts. At that time, I had also begun teaching art for a while at two schools in South Bombay - the Convent of Jesus and Mary and Campion. 1973 onwards I began attending evening classes at JJ for three years. Back then I was only doing oils and drawings and wasn't very serious about printmaking since I wasn't sure of the craft or method of doing it. So in the first year, our professor was insistent that we do linocuts, woodcuts, and then etching because it is a difficult medium in the beginning and one must be very steady with the hands. 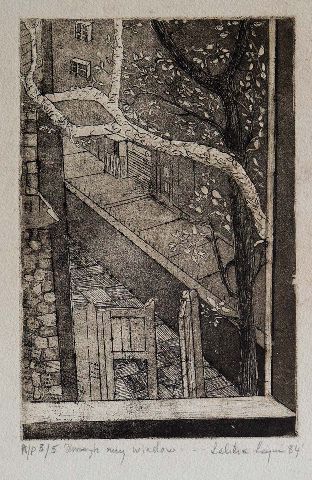 Through my Window by Lalitha Lajmi, Etching, 1984

This work depicts Lajmi's view from the Convent School in Colaba where she was a teacher. She vividly recalls the broken window right outside the institution's premises.

2. How and when did you start off printmaking then?

It took me some time to learn the craft but the problem at JJ was that they did not have the suitable material to work on at that time. I did have these at home: nitric acid, gas stove, and plates. At first, I made a lot of mistakes with the plates and spoiled them all. But I did pick it up quickly because of the practice I was putting in at the classes. The timing was from 5:30 to 7:30. The lights were very dim in the evening classes. We had large presses for printmaking. The first method is that we have to do an aquatint and prepare the inks. Everything is done from scratch by the artist. All the prints you see are done totally by me, there was no help. And though it was tiring, I was pretty young in my 40s so it was alright. However, evening classes at JJ stopped after three years, and I continued to teach at the convent from 8 to 4, so the whole day was gone. Soon I decided to buy the press. I would do all my prints at night and work after dinner from 9 to 2 every day. Preparing a plate would take me about three weeks. I have always been a highly imaginative artist who would work on the spot - there is nothing preconceived in my art. So, within a short period, my hand was steady. In the case of etchings, lines are engraved in the paint with acid which is difficult to remove if you make a mistake. I would use an instrument to rub the mistake or lines - but it takes a long time and while I did learn some methods at the JJ - later on, it was all self-learning One has to be very careful because when ink is used on the plates and on the sides, it has to be absolutely clean white. And that takes a long time to learn. I used to take the prints on Saturdays and Sundays and prepare the whole thing at the night. And in those days we didn't have enough water but we did have huge tubs on which the prints were - and the tub was filled with cold water so that I could dip the paper into it. You see, the lack of sleep did not deter me because my body got so used to staying up till 2 am and sometimes I would stay up till 3. Even today I have the same habit.

3. Were you in touch with other artists as well?

The progressive painter KH Ara helped me navigate the art world. He guided me and helped me with my first show and booked the Jehangir Art Gallery for me. You must have heard of Nasreen Mohamedi - I had met her a couple of years earlier, and she had become my very dear friend. Nasreen was teaching. I was also in Baroda MSC University and the school I was in had classes from 7 to 2 and then it was free for the artists to come and work with graphics or the press as they pleased. The college was open day and night and that was very rare. The best students have come from MSC University of Baroda. I also knew Bhupen Khakhar who was also self-taught and was working in an office back then, he started painting on his own. So Nasreen, Vivan Sundaram, and Bhupen Khakhar were staying together. I wanted a small press for myself because I did not have much money. Gulam Mohammed Sheikh was also teaching at that time. I have met everyone. I was also fond of visiting Prabhakar Barwe at the Weavers' Service Centre and I was always fond of Barwe's works. Why I don't know, but in life, you meet some people and you start getting closer to them, not because of anything else but because you think in the same way. So, whenever I had my sessions with my analysts- I would go there and have a cup of coffee with Barwe and talk to him. And that is when I got to know him, and before that Anand Mohan Naik was also working there. We used to all look up to Barwe because he was such a great intellectual and his work was so superb in the Centre and later period also.

The Masks by Lalitha Lajmi, Etching, 1975

4. We have noticed masks as a recurring motif in your works, what is the significance of that?

The concept of masks came to me because of my daughter Kalpana. She was in college and good at dramatics. I would often attend her rehearsals and was intrigued by her interest in theatre. But I started doing masks subconsciously. My masks were humane, with feelings and emotions, unlike the decorative kind which I do not like. I continued with masks for a long time but much later I came to the depiction of the body. The masks had disappeared and now they were within. And in my works, I have done not only masks but performances - inspired by cinema, theatre, and real life. That was also when I joined psychoanalysis. I would get a lot of dreams. There are some dreams that you have and when you wake up, you no longer remember them. While a few dreams are significant enough that you always remember. This is why you must write down these dreams and my analysts would ask me to narrate them which was rather difficult. I went to therapy for five long years and that helped. For two years I was doing abstract and figurative works, etching and I was very confused.  Eventually, I gave up abstracts entirely after that. Again my personality is such that while I was printmaking, that is all I was doing.

5. What was the first work that you recall selling?

I began watercolours very late. I sold my first oil to a German archaeologist for 100 Rupees and my drawings were for 15 Rupees. So you could imagine how it was still difficult to earn; because you can't be living on that. You might sell something once or twice but you can't live on it.  KH Ara then suggested that I start teaching and said I'd have to do B.ed and give all the exams. So I did a B.ed in Art for one year at the JJ and then a Master's.  I thought doing that I'd be able to teach in college but unfortunately, Mumbai University did not have art as a subject.

6. How much of Cinema was your art inspired by?

You see these books on cinema? My daughter would read a lot. She and my husband were both well-read whereas I didn't really have the time to read back then. And in my works, I have done not only masks but performances inspired by cinema and even real-life to be honest because I believe we all don masks in this world of pretend.

Lalitha Lajmi's notes on Guru Dutt and her childhood