An unabating artist whose creative expression was unfazed by the trials and tribulations he faced, A.A. Raiba (b. 1922) was relentless; almost restless in his artistic pursuits till the very end saying, “Itni Umar Gayi, Kam khatam nahi Hua". [1] His visual narrative was derived from his love for Urdu poetry and Islamic Literature. Born in Mumbai, most of Raiba’s works exude nostalgia and are intimate observations of old Bombay and his travels all over the country. Raiba’s oeuvre is rooted in intensively researched history with influences from his lifelong practice in Calligraphy. 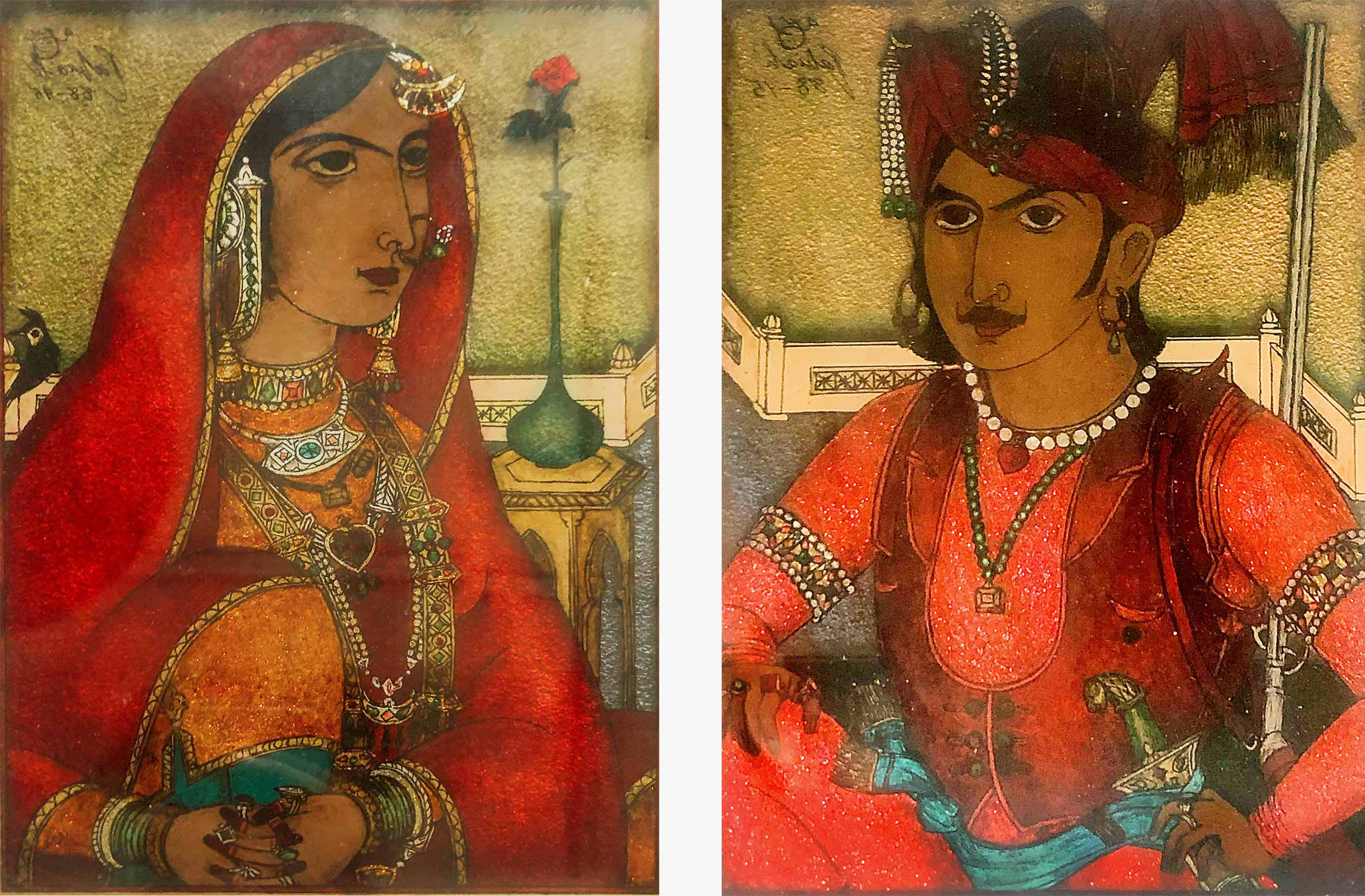 Muslim Couple by A.A. Raiba, Reverse Painting on Glass, circa 1990

Raiba came from a family of meager means, but his passion for art knew no bounds. Most of his education depended on scholarships and he worked hard for them. Raiba began his schooling at the prestigious Anjuman - I- Islam School after having secured a scholarship. His flair for writing in the Urdu language attracted a lot of attention, and his teachers asked him to try his hand at writing. Raiba started composing couplets and would translate the works of one of the greatest Urdu poets Allama Iqbal, to English. This was also the time when he practiced Arabic calligraphy which shed light on his drawing skills. After recognising his talent, his teacher introduced him to artist Dandavatimath who had opened an art school called Nutan Kala Mandir in Bombay. Here, Raiba learned the basic techniques required for admission into the Sir J.J. School of Art.

Raiba's experimentations with different kinds of material might have something to do with most of his childhood spent in his father's small tailor's shop on Temkar Street in Bombay. Small strips of fabric would cover the floor amidst which young Raiba would play.

In the early 1940s, when Raiba was around 18 years old, he interacted with Charles Gerard ( the dean of J.J.School of Art) who offered him a scholarship at the JJ and encouraged him to work with mural paintings and oils. Here, he received training from Jagannath Murlidhar Ahivasi, who fostered in him an interest in miniature paintings. Ahivasi was also a leading pioneer of the Bombay Revivalist School. Having intricately studied and practiced the Indian style of painting, Raiba stirred away from the then prevailing Western and academic norms in the Indian art scene to pave his own style. His works included depictions of the village folk with colour tones similar to miniature paintings.

While in the Sir J.J. School of Art, he never missed the opportunity to visit various places and paint his experiences there. These paintings based on real-life experiences were liked by people. To name a few: ‘Forgotten Gothic Cathedral’ painted after his visit to Calicut and Pondicherry, ‘Ruins of Aundha fort’ were his Goa’s memories, remembering Sikkim- Bhutan, and Nepal he painted ‘No man’s land’. [2]

Raiba graduated from the JJ School of Art in 1946 with a diploma and was appointed as a Fellow in the painting department for a year in 1947 by Charles Gerard.  In 1948, he received a bronze medal from the Bombay Art Society for the painting ‘Shrinagar’. The following year he received a silver medal for ‘Glory of India’. He also visited Kochi, where he documented his experiences in a painting called Lullaby for which he received yet another bronze medal. Raiba's travels across India became his muse and his penchant for recording his adventures became famous worldwide. His canvas often narrated tales of his intensive travels capturing the authenticity of India in his paintings.

Rudi Von Leyden, an art critic observed Raiba's works over a decade (the 1940s- 1950s) characterised by striking and bold forms balanced by somber colours. Leyden then invited Raiba to join the Progressive Artists' Group, but his school of thought was completely different from his contemporaries such as F.N. Souza who was also his classmate at the JJ School. However, Raiba soon resigned from the group after a show in 1953, and in 1955 exhibited his paintings in Delhi featuring his Kochi travels. Raiba organised well-researched exhibitions after studying his subjects thoroughly for his audience. His exhibits were based on his travels and themes such as the History of Bombay, Kashmir: Miniature to Monumentalism, Metaphysical Paintings, the Baramasa of Keshavdas, Mirza Ghalib, and Islamic Calligraphy. He would design his own invitations, incorporating translations of Allama Iqbal, stylistic elements of Islamic calligraphy, and Modernist typography.

A simple man of few words, he always strived to do something different. [3]

During that time, most of his contemporaries moved to Paris and encouraged Raiba to do the same. He then consulted Walter Langhammer, one of the founding fathers of the Bombay Progressives, who suggested he move to Kashmir instead, where Raiba spent more than three years. (1957 -1959) Raiba found accommodation in the Naginbagh area of Srinagar and would venture off to the city's various Mughal gardens to sketch. He would also traverse the mountains on foot and paint landscapes. The traveling artist intricately documented the city's monuments, mosques, and people. Raiba captured the essence of his stay in Kashmir perfectly, be it the slanting wooden roofs of mosques in the winter, the folk motifs in the temple of Jammu, or the renditions of Kashmiri women. Here, he was also exposed to the various disappointments and dilemmas of the people living in that region. He stirred away from miniatures and revealed the plight of the people there through the use of charcoal and white colour. Raiba never really forgot Kashmir even after his return and memorised contexts for the future while he was travelling. 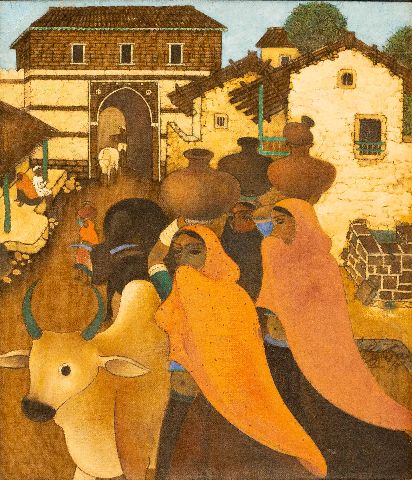 After his return to Bombay, Raiba gave up watercolours and worked with oil on jute canvas. Raiba's works adhered to the Indian style of painting ranging from depictions of Kashmiri women to South Indian fisherwomen, and Goan landscapes to North Indian village landscapes and seascapes. His artistic oeuvre mapped his travels across India in bold strokes, definite solid lines, and vibrant colours. He would sketch villas in Goa and along the Malabar Coast. He continued to sketch for many years after, using perspective in shades like deep reds, umbers, and yellows.

Raiba was an artist of humble means, who did not believe in the commercialisation of his art. Unlike his contemporaries, Raiba's works were rarely up for auction. He would often say, "Work with passion, money will follow you." Raiba continued to paint out of small spaces, mostly his home and studio in central Mumbai which contained at least two decades of his work that was destroyed in 1972. Raiba went through extreme psychological trauma after having escaped from a collapsing building, witnessing the loss of lives of his neighbours, and watching his two-decade-long body of work perish in front of his eyes. Raiba then moved with his family to his small home in Nalasopara where he continued to paint. Raiba's creative curiosity knew no bounds despite his plight. In 1980, he returned to his alma mater (J.J. School of Arts) and enrolled himself in an evening hobby course in Graphic Print Making at the Print-Making Studio. There was a substantial shift in Raiba's artistic style after 1983 in the material he used. He began experimenting with glass and enamel painting during this period with works such as the Muslim Couple. In 1984, Raiba wrote in an invitation catalogue for one of his exhibitions:

To comprehend the meaning of Art, I have ceaselessly tried to understand what life is – its circuitous course and ultimate goal. I go through a labyrinth of desire and fear, and I must keep on. The only alternative to ceaseless action is Death, which alone can drop a curtain on the medley of deeds and also what remains undone. [4]

Raiba continued to write clear and witty proses for his self-made catalogues and invitations until he felt that he had lost the ability to orchestrate such shows. However, he relentlessly went on painting at his home until he breathed his last in 2016.