An observer and painter of life, a chartered accountant occasionally picked up his paintbrush to reflect the uncanny, the fantastical, the mixed droll, and dramatic impulses quintessential to everyday life. Bhupen Khakhar (b.1934) unabashedly revealed the melancholia, mundanities, and inner monologues of the marginal man. Khakhar was born in Bombay, but the quaint town of Baroda nurtured the artist in him. An office accountant in the city of dreams, money was not the only thing Bhupen wished to draw.

In 1962, Khakhar left his lucrative job as a chartered accountant in Bombay and went to the university town of Baroda to explore his interest in art. Here, he joined the Art criticism course at the Faculty of Fine Arts while working as an accountant to sustain himself.

"I think art is just like everyday life. It is full of frivolity, it has its seriousness; for me, it is a necessity, like when I eat." [1]

A home away from home, Bhupen fearlessly exercised his artistic liberties in Baroda. "I came to Baroda because it would have been impossible for me to stay in Bombay and paint because my family members would not allow me. I wanted complete freedom," said Bhupen in one of his interviews. Initially, Bhupen would paint on Sundays, leaving the rest of the week to finish his accounting. However, with no formal art education, it was a struggle to paint. "I wanted to be in college for a few years to learn the craft of painting. I wanted to know the names of colours, the mixture to be used of oil and turpentine, the enamel paint- stretching the canvas. I wanted to know the history, the names of painters, etc. At this time, I met Gulam Sheikh, and he asked me to come to Baroda." [2]

In the early 1960s, Baroda was the Mecca of Modern Art, and this is where Bhupen wished to develop his artistic practice. Amongst a community of artists and intellectuals emerging as modernists in the Indian art scene in the mid-1960s. Leading painters working in Bombay initially associated with the Progressive Artists' Group manifested collective cultural identities for their new nation post-independence. While artists in the 1950s like Tyeb Mehta and Akbar Padamsee in Bombay – were concerned with existential, modernist thought realised with expressionist strategies. However, the late 1960s accounted for artists such as Bhupen Khakhar, Gulammohammed Sheikh, and Vivan Sundaram turning away from the "abstractions of the nation and metaphysical man." [3]

This closely-knit community lived and worked part-time in Baroda while committing to capturing the local, immediate, and daily humdrum of life. While Bombay was emerging as a commercial and cosmopolitan art world, Baroda embodied the vernacular, mediated through the sophisticated and liberal setting of the Faculty of Fine Arts at Maharaja Sayajjrao University. The environment in Baroda was instrumental in letting Khakhar create artwork that set itself apart from prevailing art trends of the mid-1960s. His artistic evolution was rooted in class, religion, and region. Khakhar's body of works was an influential commentary on complex power imbalances and the unusual depiction of people in various urban surroundings.

“At the same time, Bhupen is the office accountant who sits down for a cup of tea at the wayside Dhaba and looks about nonchalantly, and also an artist with a crazy pair of eyes who combines an aerial view of the scene with a 'zoom-in’ focus on commonplace details.” [4]

Khakhar was a quintessential member of a new wave of narrative painting and figuration that came to be known as the Baroda Group. The group comprising Bhupen and his contemporaries like Gulammohammed Sheikh, Vivan Sundaram, and Sudhir Patwardhan aimed to form an empathic connection with the working class through their art.

Khakhar's lack of formal training enabled him to evolve his mode of address, lending a certain edge to his artistic expressions. His early works revolved around themes drawn from popular religious and secular visual cultures. Bhupen's narrative paintings were hence deeply rooted in influences ranging from devotional aesthetics and street culture to European painting and pop art. His initial works made ready-made images of deities from popular oleographs which were collaged and painted over, often with graffiti. 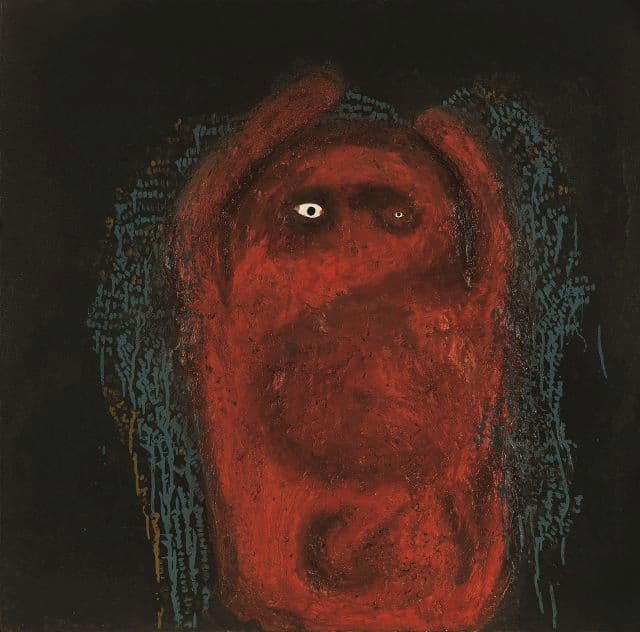 HANUMAN, Mixed media and oil on board, circa 1960

After experimenting with Pop art, Khakhar evolved a style that was a blend of high and low, popular and painterly aesthetics, fueled by his deep knowledge of art from South Asian and European sources. His themes, revolving around homosexuality and cancer were provocative and emotionally charged, pointedly to a conservative creative audience.

Bhupen's works from the 1970s are keen observations in the lives of ordinary folk. Each painting was a representation of people in all their vulnerability. Walking through bazaars and bustling streets, Bhupen would paint a tailor in his shop, the shoemaker in his stall, the proletarian at the tea shop, and the factory worker on strike. He depicted men doing ordinary jobs. When asked in an interview if his artworks were an oblique attack on the middle class and their values or simply a reflection of his deep empathy towards them, Bhupen said:

"I am at a loss to know what exactly my feelings are towards these people. At one time, I feel fully sympathetic to them, but at other times I also feel against their hypocrisy. And another thing is that I come from the same class. So, I feel some kind of immediate identification with them. I attack it and I love it. I don’t know what it is." [5]

Within this artistic climate, Bhupen was celebrated for his empathetic portraits of inner-city and provincial middle-class life. And even as he struggled with his personal and artistic identities in various public spheres, he navigated his passage as a painter. He explored realist, surrealist, abstract and citational strategies until he derived a unique, hybrid optic for himself. Bhupen was not only a painter but also a performer. During the 1970s, Khakhar established himself as a connoisseur of the stage, a status evolved by his talent for presenting himself to the public through animated performative gestures: in his exhibition invitation cards and posters during this period, he would appear costumed, variously, as Sri Krishna, a politician, and a James Bond from Kalbadevi.

"Khakhar was always a celebrant of surprise, shock, and disquieting pleasure; to him, life was to be staged and experienced as a festival, an endless Utsav” [6]

Even while Khakhar's paintings were intimate narrations and revelations of the lives of the common man, the artist nurtured a secret world within. During the 1980s, Khakhar emerged from the closet. Recognized as India's first openly gay artist, he revealed the everyday life, emotional states, fantasies, anxieties, and dreams of the homosexual self. Hence stirring a revolution against rigid social norms while declaring an unapologetic painterly stance. In painting after painting, he began to take the intimate and social fact of alternative sexuality as his dominant subject. [7]

Khakhar's artistic body of works gave a voice to the voiceless, marginalized by social mores, and eliminated from the prevalent culture’s definition of normality. Simultaneously, Khakhar managed his social existence in such a skillful way as to remain rooted within the host culture of the Gujarati middle classes of Baroda and Bombay. An accountant, artist, activist, critic, editor, and interpreter – Khakhar took it upon himself to represent the marginal, forever highlighting the vulnerability and invisibility of human existence through his art.

[1] and [5] Interview with Ein Lall, Bhupen Khakhar Collection, Art from the collection of Brian Weinstein, Ph.D.