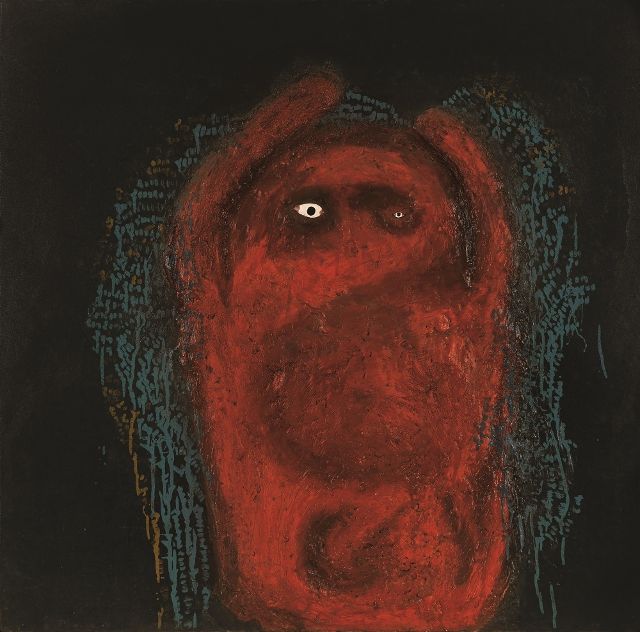 Hanuman, Mixed media oil on board, Circa 1960

This work from the 1960s depicts a vermilion-smeared deity from a wayside shrine. Like many such deities, it is formless – the proper term is ‘aniconic’ – and looks out at the world through a pair of enamel eyes. Known technically as chakshu, from the Sanskrit for ‘eye’, these are presented as votive offerings at Jain shrines, to adorn the icons of the tirthankaras, as well as at Hindu shrines, especially for Krishna and also for the Devi in her varied manifestations. The eyes in this work are of different sizes. Rather than having occult symbolic significance, this happenstance may simply reflect the spontaneous and accretive – rather than designed and programmatic – nature of worship and ceremonial at wayside shrines in India.

When we compare this work with Khakhar’s ‘Interior of a Hindu Temple III’ (mixed media on board, 1975). Coll. Museum of Art & Photography (MAP), Bengaluru, it takes its place in a phase of the artist’s career when he was deeply interested in the everyday life of the gods of the street and the crossroads. ‘Interior of a Hindu Temple III’ combines elements of painting and collage to demonstrate a spectrum of icon-making practices, ranging from a near-aniconic emphasis on the divine, all-seeing eye that bestows on the worshipper the grace of darshan, to the mass-printed poster or calendar image of a multi-armed divinity.

Bhupen Khakhar (1934-2003) belonged to a generation of postcolonial Indian artists who devoted themselves to irony, allegory, and the playful subversion of bourgeois social pieties.

They embraced the local character of metropolitan and small-town India in all its roughness, precariousness, and makeshift awkwardness, representing the middle-class and working-class lifeworlds that had largely been excluded from the polite domain of art dominated by abstract and transcendentalist idioms. A dramatist and fiction-writer in addition to being a painter, Khakhar participated in two coups d’etat of representation. During the 1960s, he brought the garish interiors and bricolage aesthetic of the non-Anglophone middle class into art; and by the 1990s, he had come out as India’s first gay artist, revelling in such taboo subjects as the pleasures of homoerotic life and its picaresque dramaturgy.

Working through an interplay of voyeurism and clairvoyance in both phases, Khakhar remained committed to epiphanic portraiture, attentive to the small choreographies of interpersonal contact, the details of look, touch, and speech.

A connoisseur of the shifting balance between solitude and sociality, Khakhar was a natural-born anthropologist who shuttled easily between the roles of participant and observer in the various interpersonal situations in which he found himself. Khakhar tended to fuse his portraits of others with self-portraits so that his anxieties, exhilarations, and predicaments became interwoven with those of his subjects. Khakhar’s deliberate use of seemingly naïve idioms acted as camouflage for a sophisticated retrieval of various styles, including the Rajput miniature, the Nathdwara pichhwai or backcloth, the cinema poster, and the wayside votive shrine. In the world of belief, Khakhar could be both the bhajan-singing devotee (memorably, he sings a devotional song in Arun Khopkar’s 1990 film poem, ‘Figures of Thought’, dedicated to the work of Khakhar, Vivan Sundaram, and Nalini Malani) and the impish skeptic poking fun at the pieties of the faithful.

At the heart of Khakhar’s universe, I believe, was the leela – the principle of divine play, which can present itself as a creative adventure and also as caprice or folly.

In India’s Bhakti traditions – with their practices of ecstatic devotionalism – the leela could range from stylised festivity to bawdy and anarchic celebration. In Khakhar’s art, this double-edged spirit of leela took diverse forms. The high ritual of the yagna or sacrifice could, in his paintings, double as a gay marriage festival; the multiple erotic encounters of the Deity in the Pushtimargi raas krida could be translated into secular and even joyously profane terms. In Bhupen Khakhar’s encaustic painting of the aniconic vermilion deity with its masterful eyes, we are summoned back into the primeval world of the deity who could either harm or heal, depending on how it was propitiated and appeased. The enigmatic sources of the religious imagination are not that far apart from the sources of the artistic imagination: the mystery requires a substantial degree of attentiveness and responsibility, for its proper articulation.

Ranjit Hoskote is an Indian poet, art critic, cultural theorist, and independent curator. He was honored with the Sahitya Akademi Award for lifetime achievement in 2004.