I had the good fortune of spending a larger part of my life in close association with M. F. Husain. Or Uncle H, as I called him. He was more than just a friend of the family. He was part of the family. We all lived, painted, and went on vacations together. There were always the choicest of paints and canvases in the house while growing up, for which I am always thankful to him. I got to paint alongside him right from when I was 6 years old. As a child, he must have seen a unique creative spark in me. Or so he said to me in a note, written inside a book he sent me just a month before he passed away. 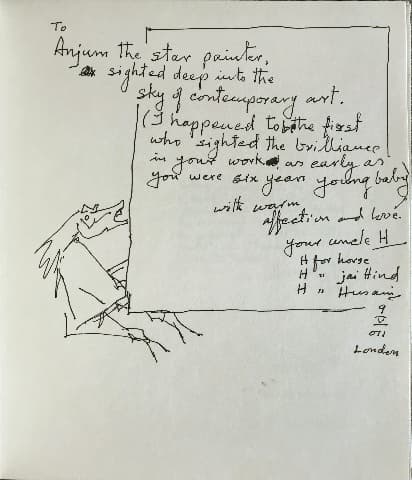 I remember the first time he noticed and commented on my work. It was the mid-70s, we had some prominent guests at home, and as everyone was busy in the living room with after-dinner tea and conversation, I busied myself with my crayons. Head burrowed in my colouring book, I was meticulously filling inside the lines, unaware that Uncle H was standing behind me. I clearly remember the colour I was using – teal green. And just as I was done with it, he reached out to take my colouring book, “Ek minute. Zaraa dikhaao (one minute, just show it to me). Why did you use this particular colour?”, he asked. A very red-in-the-face 6 years old, I scrambled to come up with a correct answer to this giant of the art world. “It was a natural choice”, felt like a lame answer at that moment.

Nevertheless, He took my colouring book and was soon showing it to other guests, in rapt admiration. “Just look at the colour she has used! And the way it perfectly balances with the rest of colours”. Standing behind the door, I could sense the bewilderment of the guests. Mr. M. F. Husain, waving a kid’s colouring book with an earnest admiration! By then, the colour of my face had gone from an embarrassed-red to a mortified beetroot!

Such was this man. Nothing was too small or too big for him, as far as art was concerned. It was always serious business.

It is not that he was always appreciative of my works. There have been times when I was asked to, not just take my painting off the wall, but place it on the ground, facing the wall. “I can't bear to even look at it!”, he said.

This trait of his, giving an unfiltered critique, must have rubbed some people the wrong way. He would shrug and say, “if you ask me for an opinion on your art, I will always tell you the truth. You have to be prepared to listen to it!”

And I was always prepared for it. From time to time, I would visit him to show him my recent works. Sometimes, after every negative critique, he would try to soften the blow by saying “Don’t feel bad. I understand, a woman has many other responsibilities of the house, and it's difficult to manage taking time out for painting.” Then there were also times when he would jump up in a eureka sort of moment and thump my back, beaming in appreciation. And then bestow on me his entire selection of paints, brushes, canvases in his London studio.

He was my Godfather, my guru, and my teacher. I chased after him to teach me watercolours. I would quiz him about his creative process. And how to approach a subject. To which he would seriously sit and draw to show me how the negative space is important. When I was in boarding school, he would send me detailed sketches of the recent paintings he had made. 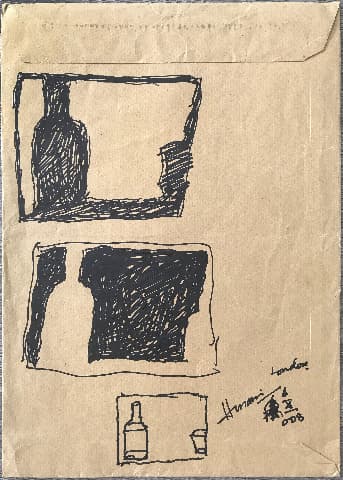 Uncle H is the reason that I joined Delhi College of Art. He drove me up there in his car to register for the Bachelor of Fine Art Programme. He would often come to pick me up from college after my classes. All the art students would gather around him, asking him questions and interacting with them was a thing that he enjoyed immensely.

Uncle H was one of the most generous, down-to-earth men. He loved simply walking to places. Barefoot. Loved the feel of the ground beneath his feet.

While in New Delhi, it was a dhaba near the Nizamuddin Durgah which was his favourite haunt. You would often find him there at the break of dawn, reading his paper, sipping chai, and having his bread-omelet. And while in London, it was the high tea at the fancy Dorchester Hotel. He was a man comfortable in his skin and was equally comfortable in either surrounding. To me, this unique, wonderful, and rarely found trait made him a great man. His humbleness, his interactions, and his naturalness made him a wonderful human being. The magic he created in his paintings. He could almost create an optical illusion with just flat planes of colour, giving you the impression that you can, at any moment, just walk into the painting.

Watching him paint was a treat. It may look to the unknowing eyes that there was aggression in his strokes. On the contrary, I saw a firm and steady tenderness in the way he handled the paint.

With an almost fatherly loving care, he would push the colour with his brush on the canvas. Lovingly. The revered devotion he gave to the process of creation, his paintings responded by giving him back tenfold, by looking magnificent. There was certainly magic. And this is what makes him the greatest artist of all times.

Anjum Siddiqui is an Indian artist, graphic designer, and visualiser with a passion and keen eye for the fine arts and has painted in various mediums. She also worked with and learned from M.F. Husain who was an Indian modern master widely acclaimed for modernising the Indian art movement.