An intensely private artist whose artistic imagination was fuelled by the strange, dark fantasy of his grandmother’s stories and charred by the horrors of his reality, Ganesh Pyne's paintings are quiet revelations of his personality. Pyne's intricate ink works, haunting temperas, and jottings are rich in imagery and symbolism, bordering along the uncanny and drawing our attention to a world beyond the familiar. His art deeply rooted in dark, unsettling images, derived from mythology and dreams.

Pyne's obsession with the dark world stemmed from his disquieting encounter with death and violence as a child. Pyne grew up in Kolkata amidst the turbulent years leading to Indian Independence. Scarred with his childhood experience of the 1946 Calcutta riots that threw him outside his 19th-century mansion, death was one of the recurring themes found in his paintings. His grandmother's fantastical tales at the balcony of his decaying mansion paired with his first brush with death soon enough manifested in his art.

“The shadowy niches of his childhood home, the theatricality of jatra, and his traumatic encounter with death and violence came to besiege his memory, which would imbue the mundane with a mystique and gift him a rich and complex interior landscape to contemplate.” [1]

Ganesh Pyne started his artistic career after enrolling in the Government College of Art and Craft in Kolkata in the 1950s. He devoured all forms of art and was perpetually in awe of the written word. From the 1990s, Pyne maintained a personal diary penning down verses of poetry by various personalities, giving one a window to his thoughts, musings, and motivations quintessential to his artistic oeuvre. Pyne observed artistic cultures from all over the world, traces of which could be seen throughout his evolution as an artist.

After graduating from the Government College of Art and Craft in 1959, Pyne spent the early 1960s sketching for animation films at Mandar Mullick’s studio. Mullick was keen to establish a vibrant cartoon industry in Kolkata similar to that of the Walt Disney Studios in California. He brought the veteran Disney animator Clair Weeks (1911-1996) over from Los Angeles to train his artists. [2] Weeks taught Pyne how to distort and exaggerate features to portray emotions. The artist absorbed this technique to inject a sense of the uncanny in his paintings.

The '60s was an awakening, a time for new experiments and visions in the art arena. In 1963, Pyne bid adieu to the world of filmmaking and joined the Society of Contemporary Artists, a community of artists, sculptors, and printmakers based in Kolkata, who assisted each other and held classes and exhibitions. Soon enough, Pyne became a prominent face of this art movement. His work during that period comprised small drawings in pen and ink. Pyne could not afford to paint/draw with colours at that time. Moreover, this was also the period of experimentation for the artist.

And while Pyne drew from the art tradition of the three great Tagores, his artistic curiosities were never singular. He had a multi-lingual taste in art, so he should not be placed in the Orientalist tradition. Paul Klee’s "The Thinking Eye" gave Pyne a new vision and light. While the Dutch painter, Rembrandt dominated his student days.

The Bengal School was a nationalist art movement led by Abanindranath Tagore and Nandalal Bose, that followed literary painting with rigid standards. And even though Pyne came from this school of thought, his artistic vision was dark and eerie, steering away from romantic and nationalist themes to ask existential questions. 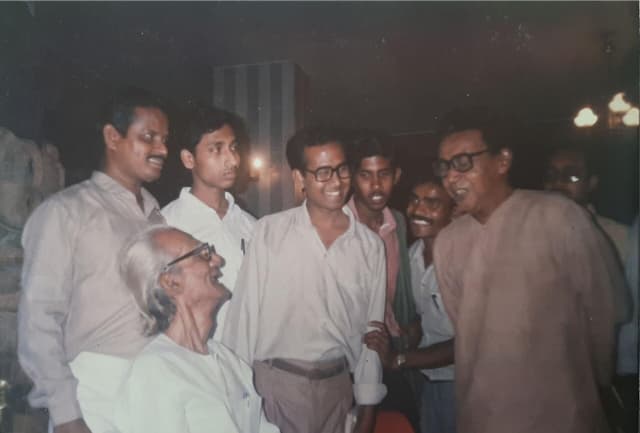 Pyne's life witnessed many deaths, like Rabindranath Tagore, hence drawing inspiration from him. Death breathed heavily on his canvas. His art was an unsettling fusion of the dark innards of his imagination and a magical reality. Ganesh Pyne also produced an art suspended between the fantastic and the Surrealist. But tradition for him means the much-maligned revivalist art of his predecessors. By connecting it, through the Symbolists, with Klee, he produces images of gentle eeriness. [3]

In one of his interviews, Pyne stated that he encountered many deaths as a child, and he accepted death as a reality of life at a very young age. He did not flinch or hide from it but instead explored it further in a way to organically link it with life. Pyne found his medium in tempera after traversing his way through watercolours and gouache. He soon came to be known for his soul-stirring temperas charged with an element of the supernatural. Skulls, skeletons, and misshaped figures with demonic animals conveyed his perspective of the tragic world. His inventive play with light and darkness reflecting the shadowy nooks and corners of his childhood home.

"The element of dream in Ganesh Pyne’s paintings is both fascinating and disturbing." [4]

The reclusive artist lived a quiet and austere life, barely leaving his hometown in Kolkata. He produced nine or ten works a year. He derived his unique painting style over time by spreading multiple translucent color layers on the canvas and brightening it. This created areas of penetrating light and shadow along with phantom-like figures.

Pyne was averse to publicity and preferred not to explain his art. He did participate in the Paris Biennale in 1969 and other shows in Europe and North America while keeping his distance from the public eye. In 1970, Pyne gained worldwide recognition for his dark surrealism after Maqbool Fida Husain named him the best painter in India. 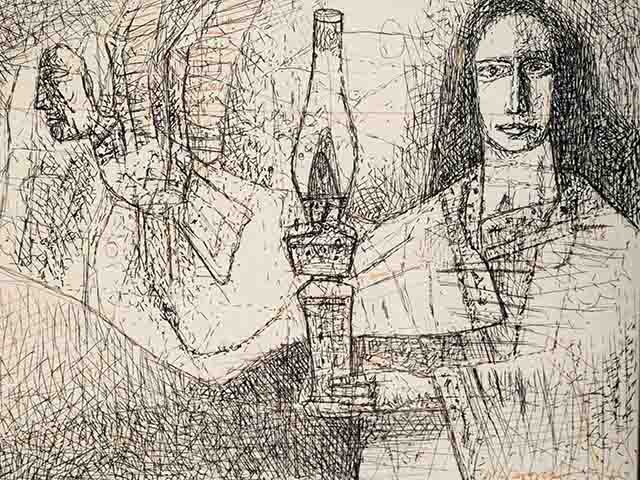 Sometime around the 1980s, Ganesh Pyne shunned the world around him, fazed by the commercialism in the art arena, and embraced solitude. This was when his signature style emerged, through experiences derived from his isolation, pain, horror accompanied by occasional waves of yearning and loneliness. At times, these images are flashes of a certain idea that may have crossed his mind. At others, they seem to resonate with verses from poems that were etched in his mind. Today, Pyne continues to be the silent master who created art suspended between reality and fiction. His works an almost uncomfortable revelation of both the horrors and wonders of life.

The Early Pyne Vs. The Late Pyne