Abanindranath Tagore was known as the father of modernism in India. Inspired by nationalist leaders who were demanding independence from the British, many Indians were using local products instead of imported and expensive foreign products.

Abanindranath Tagore was also inspired by the Swadeshi movement, saw a chance to revive and reinvent Indian traditions in art and away from western academic art. Tagore was a founder of a group of artists known as the Bengal School and believed they could develop art that was uniquely Indian without European influence through the use of Indian themes. They wanted to recover and be inspired by older art forms such as the ancient paintings at Ajanta caves and crafts like pat paintings. Abanindranath brought back Mughal miniature and Rajput styles in response to traditional western academic standards that people had become accustomed to. 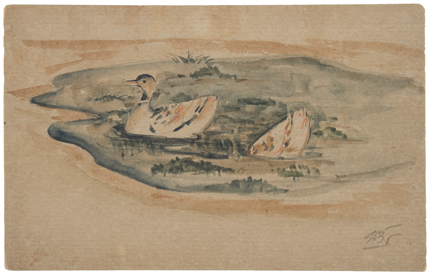 He founded the Indian Society of Oriental Art and often incorporated Chinese and Japanese elements in his own works. The work seems to be a pan Asian in character as it is a Chinese inspired Indian work. Abanindranath Tagore’s work was revivifying roots for India and China. His subject matter consists of two ducks swimming through the moss in a pond. In traditional Chinese art, a pair of ducks are often pictured together. They are symbols of fidelity, affection, and happy marriage. This was an important subject matter in Chinese art and Abanindranath was likely influenced by it.

This postcard was sent by Abanindranath Tagore to Pulin Behari Sen. Sen was one of the Directors of the Visva Bharati Granthana Vibhaga, the internal publication department at Santiniketan established in 1923. The work is signed by Abanindranath Tagore in one of his multi-language styles. As he was fluent in different languages, he very cleverly signed this work using the Bengali A, English B, and Farsi N - spelling out ‘Aban’ which was his nickname.