Sunayani Devi’s naive and primitivist art represented a spontaneous and deeply personal practice, at a time when patriarchal mores dictated women be confined within domesticity, and by dint of this, her art came to be seen from an anti-colonial frame. Although she was not formally trained in art like her brothers, Sunayani Devi grew up observing them work and developed an interest in painting. Despite being married at a young age and living in an orthodox, patriarchal society, this interest was encouraged by her husband and she eventually took up painting professionally in her thirties alongside her household work.

Sunayani Devi’s works and her subjects were drawn from Indian mythology and epics like the Mahabharata and Ramayana as well as from her domestic life in a traditional Bengali household. Her style was inspired by the traditional pata paintings and folk figurines of Bengal, and she is credited as the first modern artist to champion rural and folk art, a trend that artists like Jamini Roy would also embrace. 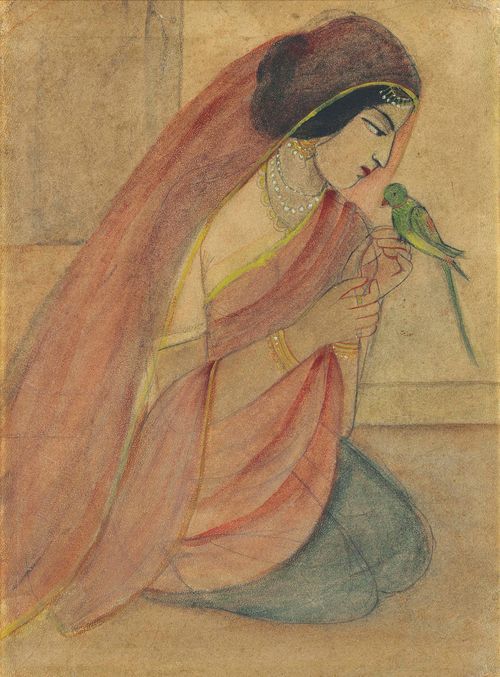 Partha Mitter describes her unique method. “Sunayani first drew a red or black outline with brush on paper, which was then filled in with watercolours prepared by herself and applied with a thin paintbrush. She then dipped the sheet into a circular drum of water allowing the colours to be absorbed by the paper. The wash was used as a continuous process through which the form emerged without taking recourse to drawing. She firmed up the outline with the brush once the hazy shapes started emerging out of the washes, the washes themselves investing her works with a delicate hue.” (P. Mitter, The Triumph of Modernism, India’s Artists and the Avant-garde, 1922-1947, New Delhi, 2007, p. 40)

“Her naïve work was singled out as a continuation of the ‘simple’ art of the Indian village, a contemporary expression of authentic India. The modernist discourse of primitive simplicity and the nationalist discourse of cultural authenticity come together in the image of Sunayani Devi as a nationalist artist.” (P. Mitter, New Delhi, 2007, p. 43)