Born in 1867 in Kolhapur, Dhurandhar was a master of watercolor. One of the most popular Indian artists, he was inspired to be an artist after he saw Raja Ravi Varma’s works of art. He studied at Sir JJ School of Art in Bombay and was an expert in the western academic style of painting. Although his subject matter was Indian in character, his works had the style of realism that western artists of that time had.

He managed to make portraits of people with idealized proportions supplemented with minute details and chiaroscuro. While his contemporaries in the J J School of art were defying norms and taking a stand in politics, Dhurandhar preferred to stick with the status quo. Dhuradhar decided not to join them and was fairly neutral when it came to politics. He continued to accept commissions from the British and even led a team of artists to make works to welcome British rulers to Bombay. While he did not take a stand against colonial norms, he was still a prominent figure in the Indian art world. He was the first Indian director of the J.J School of Art in 1930. 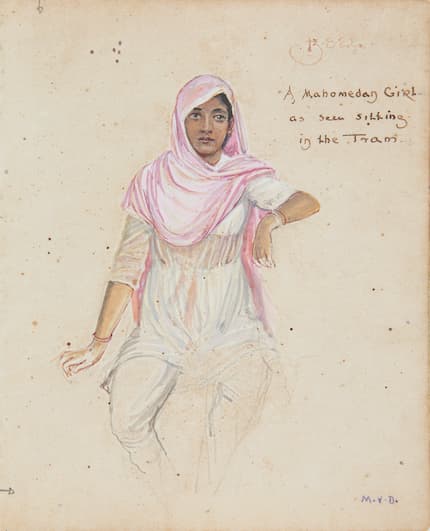 Graphite and watercolor on paper

Dhurandhar was particularly drawn to female muses. He drew them more than any other subject matter and liked to document their various moods. One of his most popular paintings, 'Women At Work', got him a British Government Award in 1892 when he was still a student. Another work, 'Marriage Ceremony' also led him to get a gold medal in 1908. His works can be described to be photographic in their quality. His sketches have a sense of realism and convey the model in an accurate manner. The female figure was always a recurring subject matter in his works. His women were often in positions of authority, garnering attention with confidence whether they were nude, socializing, or just doing mundane everyday activities.