Santosh began his career painting landscapes at home in Kashmir before being spotted by S. H. Raza, who encouraged him to study at the Maharaja Sayajirao University at Baroda under N. S. Bendre. He started painting figurative and abstract works before he completely switched to tantra inspired works in 1964.

Not only was his art inspired by Tantra but so was his life; Santosh dedicated the rest of his life to study and practice Tantra. 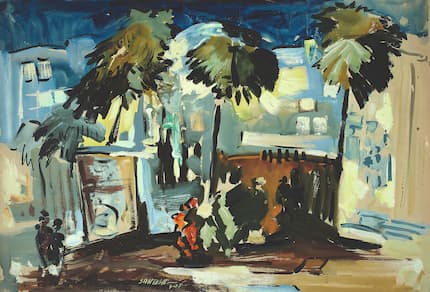 The works in this auction are both from the 1950s and are examples of his early landscapes. These are both extremely rare because a vast body of his work consists of tantra works. His early works were inspired by Cezanne and Cubism. Santosh’s early landscape works were characterized by painterly brushstrokes and a vivid color palette. Inspired by Cezanne’s ‘constructive strokes’, Santosh also used arranged brushstrokes that worked together to create geometric forms. These contrasting brushstrokes were used to define the outlines of objects without actually creating outlines. 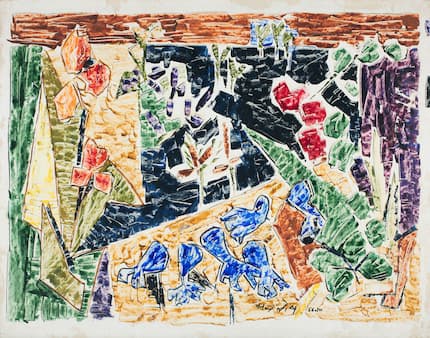 The treatment of the pictorial space by Santosh is also similar to that of cubist artists. Cubist painters rejected traditional concepts that art should only consist of nature, perspectives, and models. Santosh rejected western academic styles and emphasized the two-dimensionality of the canvas. The subject matter was reduced to geometric forms and fractured objects that aligned them so they could be used to form a bigger picture.