Today, dedicated to whose memory we have gathered together, whose memory-hall is to be founded today; it is necessary to tell something about him. His identity for many today is not that bright.

It is necessary* Many days have passed, those were the early days of life. In our India whatever the highest achievements are- be it in art or literature belongs to horizons of the past. Although I do see the best specimens of architecture and sculpture, their thread of continuity that cannot be seen has been lost in darkness. There was no consistent clear history in front of us. The art of painting was alive in India- not that long ago- but I don’t know why its life activity has stopped in the British rule. I hadn’t got the opportunity to see him alive. I can remember that then we were students of a non-native teacher. Whatever introduction to non-native plastic arts we got, can be considered only through listening to the people. Through the master’s words of accolade (we) judged them. Those who are non-native art experts- are unparalleled in sculpture, painting, and architecture. (We) Have seen images of their art in study books. Have heard about Greek sculptures, seen images from the master. (We) have accepted that such an outstanding feat had never been achieved in the world. India was then not hidden in obscurity. Turner and others…

*to elaborate about him. In this context, I will tell you about our early days. Then, despite the artistic specimens of India being in the nation, they were not within the scope of our vision. This was because their history was obscure, unclear without any thread of continuity; and that history was extraneous to the subject of our education. In India, during the Mughal rule and since the tradition of imperial court painting was flowing- that was not long ago. But due to whatsoever reason, during the British rule that could not be seen. One of the reasons for this is that for the Englishmen of that time, the Indian art of painting was a matter of contempt. We were students of such school-masters; their views led ours, so the result was as supposed to be. Then, the knowledge of Indian arts was extinct due to India’s own neglect. Then, in the royal collections if images treasured from old times were damaged; it would not be known by anyone. Then, very mediocre non-narrative paintings without any hindrance could enter the palaces of the rich, as a testimony to their wealth. When the educated were hardly acquainted with the artistic tradition of their own country, then the achievement of non-narrative talents was only a subject of the public audience to us. We had heard the names of the great masters from there, and their fame was the constituent of our memorized knowledge. In non-native printed books we saw copies of that art and knew their standards of merit. To recite those studied books was the proof of our educatedness. With non-native images came along in the sea-breeze their praises and acclaims, which without judgment and comparison, we had accepted; because we did not have the substance for comparison. As if our travels were in reading the timetable of the Railways.

… we have heard about and thought that we are far off behind them. As students, close analysis was not possible because of the distance of a sea in between. In the murky picture books, we could get only a hint. Blown by the wind from far-off countries, came floating their praises and acclaims. We have accepted them without comparison because there was no way for comparison. 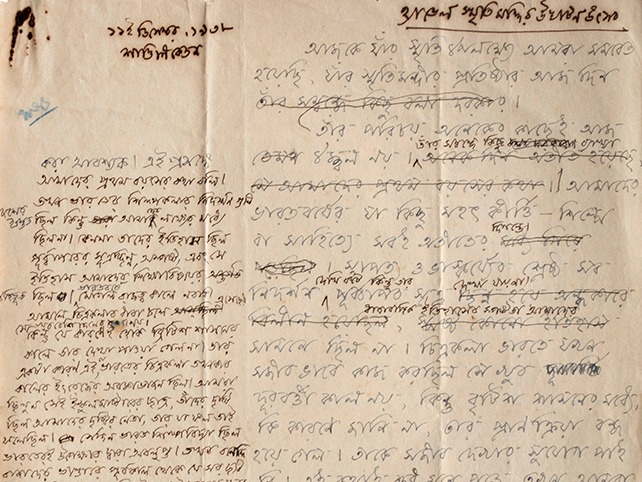 At this time, when Mr. Akshay Sarkar published Vaishnava Padavali I read it in a hidden way. I got to know by reading that there is a thing called the art of poetry. That day, the quest for Rasa in literature first touched my vital life force. As if fire touched my interiority. That day when suddenly the truth got revealed, it fuelled our perseverance. That first spark at least furthered my perseverance in literature to quite an extent.

Introduction to the pursuit of form in the art of painting, equipped with the paraphernalia of worship from the mother’s womb itself; can be seen in my own house. When Aban had first picked up the brush, he too started getting an education in a non-native way, imitating the school-masters.

His training and education also started with juvenile imitation, after models of non-native type. Everywhere, there was strict order of the school-master. I believe those bad times of his would have lasted forever if Havel Saheb hadn’t turned Aban’s view towards where the vital life force of the art of forms is. There is embedded the source of imagination and eternal inspiration. This is no mean feat. After so many days, this is a difficult event to imagine today. 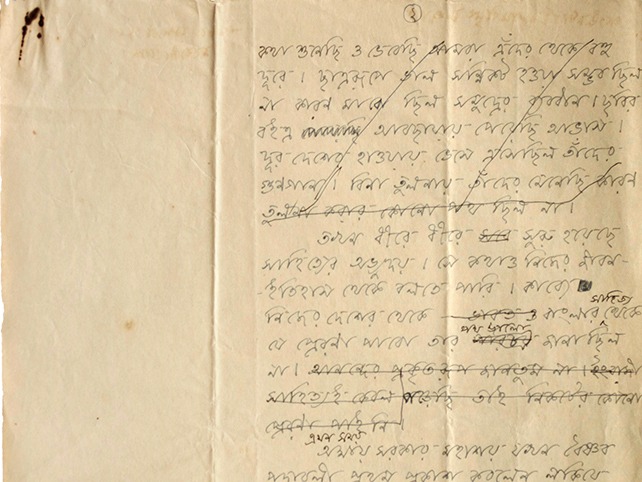 That day the deep pathos of bliss that Aban and his students received, that is the bliss of entering rightful significance. That was just the dawn, the sky a mix of light and darkness. Then, the paintings of Ravi were accepted as good. That the brilliance of his colours is as false and worthless as the dresses of theatre, no one still had the vision to perceive that. That there is no sign of empathy in it, no truth in it- I could not understand, but only derived juvenile pleasure. In that shameful condition, I was caught up senseless. French and other non-native lithographs of cheap qualities had spread all over the Indian bazaars. At that time, the rich people of the country…felt a sense of pride in hanging those pictures anywhere and everywhere and expressed their pride in wealth by showing it to everyone. Due to a lack of education, there was no opportunity to derive happiness from good art. European artistic traditions despite being famous did not give us innate pleasure as the original art forms were far from us, we got the copies. Imitation does not have the joy of creation. 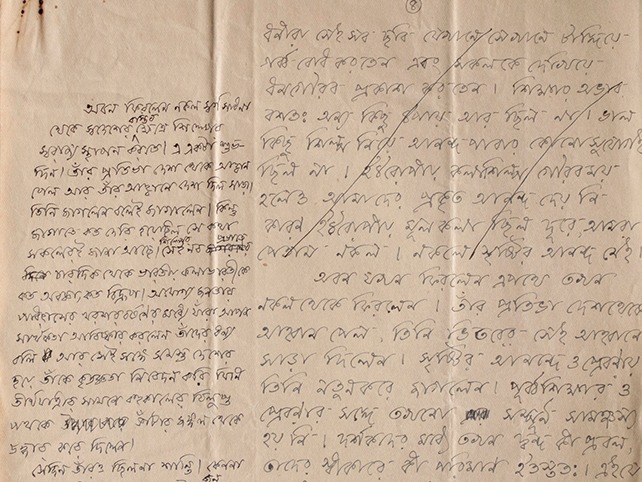 When Aban returned to this path, he returned from imitation. His talent received the national welcome; he responded to his inner call. In the joy of creativity and inspiration, he awoke anew. We have not been accustomed to Oriental education and inspiration then. In the audience, there were great conflicts, hesitation in their acceptance. Our acceptance today for the heritage of India’s arts had not got recognition then. For the countrymen, Kangra and Mughal paintings were so disgustful that it is even hard to imagine today. From this ridicule and disgust, I thank the ones who discovered, but also the one who called forth to turn to this path-  to self-governance of the plastic arts…

… to Havel Saheb, I also express my gratitude. Even he had to endure a lot of torment. The non-narrative that the Indian artists would get inspired by the developed ideals of ancient Indian art, was not tolerated by the countrymen that day. Everyone felt sad and annoyed. Even in that moment of disregard, getting inspired by this leader the great faith with which Aban could return to his own native path can not be imagined today. Remembering this, today the leader has to be paid sincere regards. 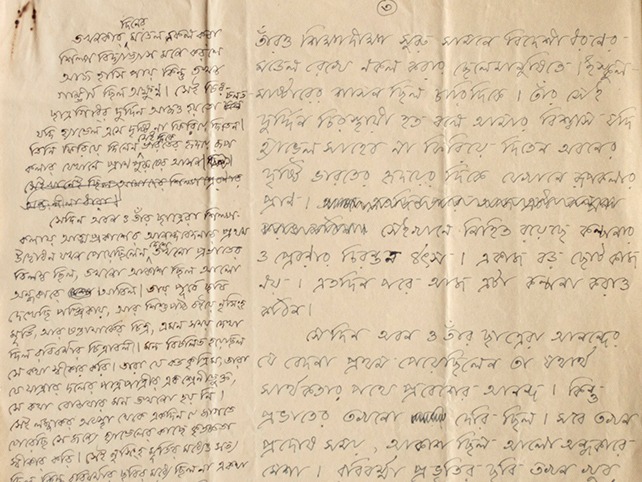 The new age that he heralded that day- it’s not yet time to witness its full flowering. Many new talented artists would now gradually wake up. Amongst them, this would slowly expand to its entirety. But today, at least this much sure proof has been found that a strong ground has been founded for them. Till now, like non-native grapes kept with great care in wooden boxes, non-native art was the priceless object from distant lands. That there is ground for it here, that this grape leaf would germinate and bear fruits was not known. So, from the non-native artistic heritage, like exotic fruits kept in small containers, (I) could taste only the juice of one or two seeds, (I) could not understand its actual flavour. To judge and see,

…there was no such ideal in front. Now on an auspicious day, seeds fell onto the natural grounds. Though amongst the artists, not everyone was talented. I have come to know for sure that seeds have been sown in their native ground. Like Ramachandra had saved Ahalya one day, that day the stone came to life at the touch of his foot; even here the stone has been touched by that foot. Penetrating the garb of darkness, the source of joy has emanated. In that path, who the first torch-bearer was-to him I offer my heartfelt homage.

An ode to Sankha Ghosh