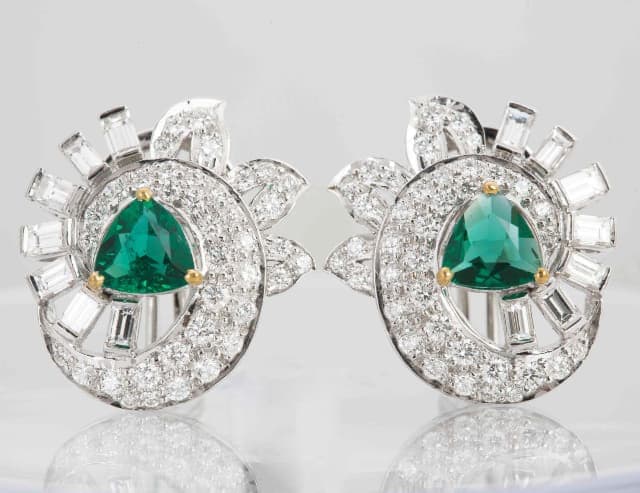 A prominent style in the 1920s and 1930s, identified by geometric patterns and abstract designs using diamonds and gems in contrasting colors.

The word baguette originates from France and translates to a long thin, loaf of French bread. This cut is one of the most popular diamond cuts for engagement rings.

Basra Pearl is a high-quality precious variety of natural pearl gemstones, originating from the Basra region of the Persian Gulf. Basra is best known to the world as the city from which Sinbad set out in the fable, The Thousand and One Nights.

A piece of jewellery worn around the upper arm also referred to as bhujband and joshan.

The Burmese Ruby is a prized possession that scatters brilliant light into the darkest of places. It is hence no surprise that this alluring stone has been every poet's muse since time immemorial. Not just a stone hooked on your cultured pearl string, the Burmese Ruby demands higher prices per carat than any other gemstone, except for colored diamonds. Traced in Burma in the 13th century, today Burmese rubies are rare enough to create a rush in auction rooms. 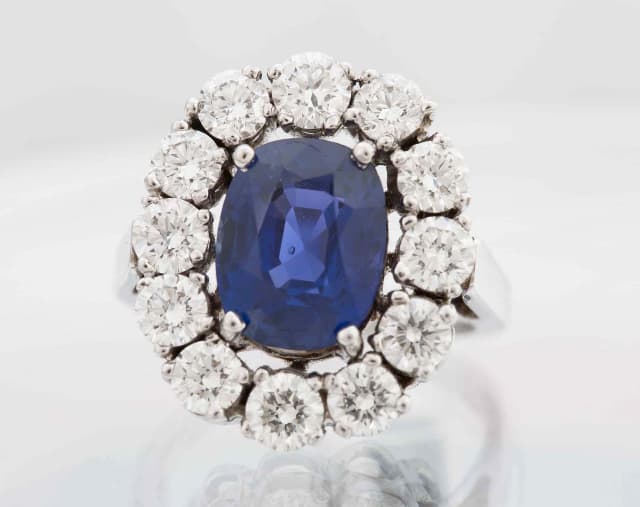 One of the finest quality sapphires known for their royal blue colour complemented by a satiny lustre and crystal clear clarity.

A Cabochon (or cutting en cabochon – French: “in the manner of a cabochon”) is a kind of cut used on gemstones where the stone is molded and polished into a smooth, convex shape with a flat base. Cabochons or Cabs are usually circular or oval but may be cut into different shapes.

Also known as a round-cut diamond, this is the most popular diamond shape. They are known for their brilliance, fire, and scintillation.

The cushion-cut diamond also once referred to as the old mine cut boasts of a square cut with rounded corners, much like a pillow, and has been around for 200 years.

Jadau derives its name from the colloquial term ‘jad’ (which means to embed) and is widely used in kundan, polki and meenakari jewellery. Introduced in India by the Mughals, it is a technique of jewellery-making where precious gemstones like uncut diamonds, pearls, emeralds, and rubies are embedded into gold.

A semi-precious gemstone famed for its green varieties that comes in two main types: nephrite and jadeite.

Chandelier-shaped ear ornaments hanging off a small hook. Also known as jhumki, these bell-shaped jewels have adorned the ears of many since the royal emperor's era.

Thick metal bracelet/ bangle donned as hand ornaments for men and women of the Indian sub-continent. 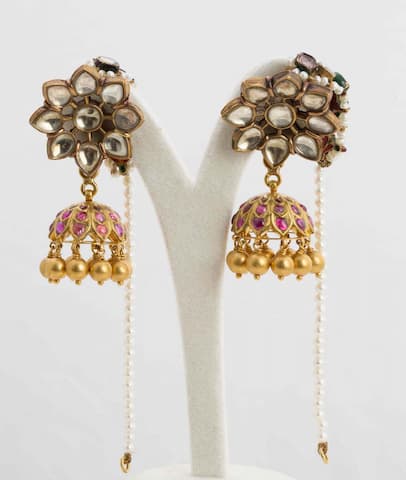 Karan-Phool earrings are long, hanging earrings with two parts. One part is an Almas earring confined within a gold frame, in a floral shape with pearl drops. The other is a suspending chain known as the Larzak made from pearls traveling all the way above your ear, eventually tucked into one's hair. Even though they are two parts, they are made as a single piece.

The art of enameling/engraving ornaments with vibrant colours with its roots in Jaipur. Meenakari stood out as an art form in the vast category of jewellery-making techniques, accentuating the characteristics of fine aesthetics and craftsmanship. Jewellery with enamel only on the reverse  (pichhari-ko-meena) was the style for necklaces, pendants, and ear pendants.

Nath is an elaborate nose ring, popular in Madhya Pradesh, Rajasthan, and Gujarat since the late nineteenth century.

A Sanskrit compound word meaning nine gemstones. The Nava Ratna arrangement is the gemstone concept of the nava ratna (nine stones) and their nava grahas (nine planets). The nine planets being the sun (ruby), Venus (diamond), Moon (pearl), Mars (coral), Ascending node (hessonite), Saturn (blue sapphire), Descending node (cat's eye), Jupiter (topaz), and Mercury (emerald). The traditional mystical arrangement of these nine gemstones is motivated by their mythological connection to the nava grahas, the nine celestial divinities, and their nine planets, working in unison with their specific planet to keep the universe in harmony.

Onyx is a form of quartz in various colours. The pure black form is the most popular, especially for beads.

A piece of jewellery attached to a necklace by a small loop. The name pendant originates from the Latin word pendere and Old French word pendr, meaning "to hang down."

A Rose-cut diamond resembles the shape of a rosebud with a flat base being one of its main features.

A string of silver-grey coloured pearls, usually larger than your average pearl. These come from the oysters living in the south sea areas such as Australia and China.

The square emerald cut is characterised by large step-cut facets, a high crown, and a small table.

The Taveez is traditionally meant to protect individuals and ward off evil.

Uncut diamonds are unpolished, unshaped, and also known as raw and rough diamonds. A diamond's value is based on the four C's; cut, carat, colour, and clarity.