Henry Singleton first rose to prominence as a contemporary history painter in a family that was known best for their miniature artworks. Born into an artistic family, Henry Singleton was raised by uncle William Singleton who painted portraits and miniatures. Although he dabbled in miniatures as well, his well-known works were portraits and historic paintings.

The Royal Academicians in General Assembly (1795)

His series of four large scale oil paintings depicting the war between the British and Tipu Sultan is one of his best historical works. Two engravings published by the London Printing and Publishing Company are being offered. 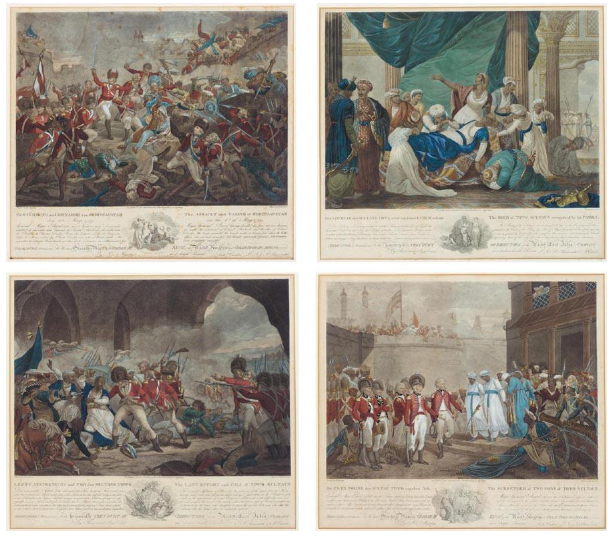 Engravings of all four paintings in the series by Henry Singleton

The Last Effort and Fall of TipU Sultan is a popular image and is often synonymous with Singleton’s works. 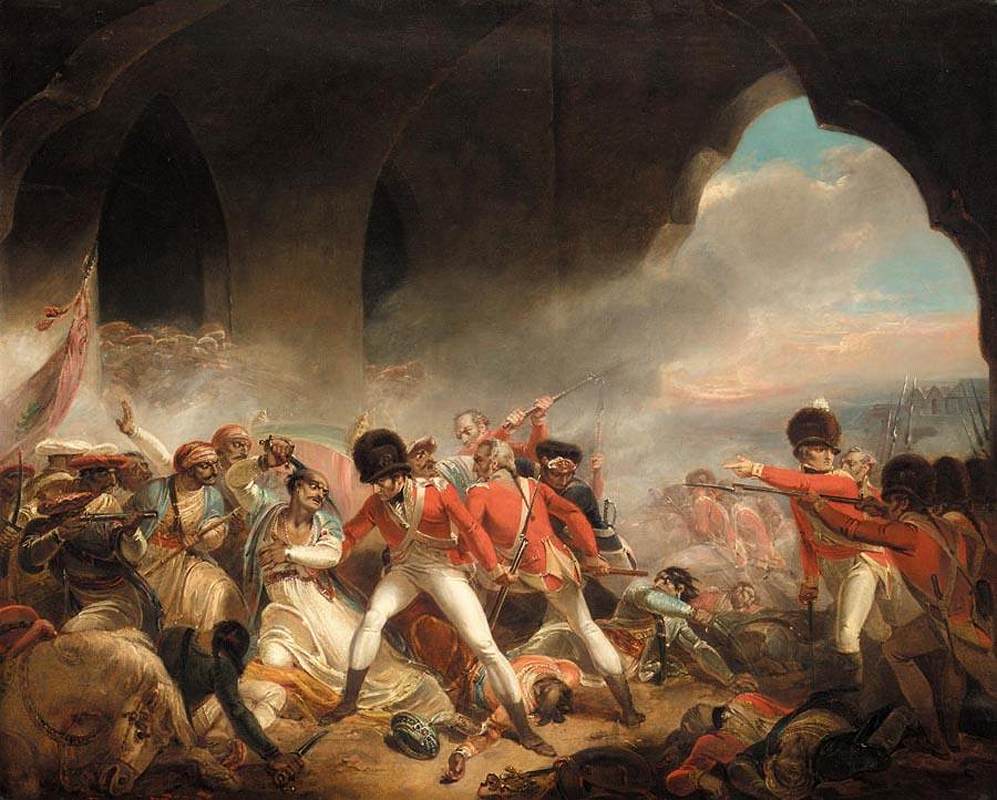 This hand engraving by Rogers, after a painting by Singleton, is a dramatic depiction of the East India Company’s final storming and capture of Seringapatam in 1799. 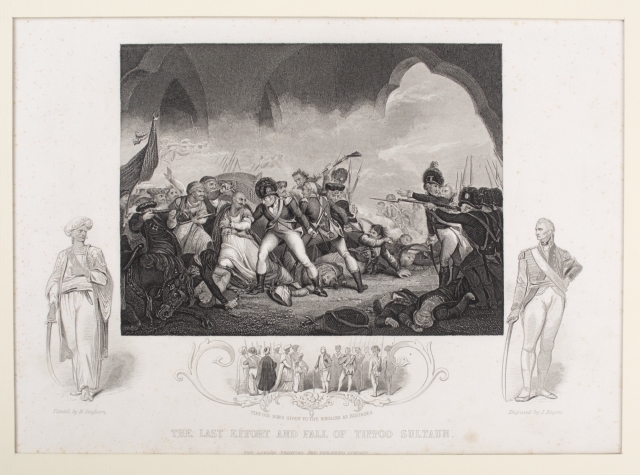 The fortified capital of Tipu Sultan, the then Mysore ruler, and bitter opponent of British imperialism were captured during the Fourth Anglo-Mysore War. In this image, both sides are seen in the middle of battle, with uniformed British soldiers charging at the Mysore army led by Tipu. Tipu’s fight to his death and the fall of Seringapatam would inspire several artists to create works celebrating this crucial victory by the British. 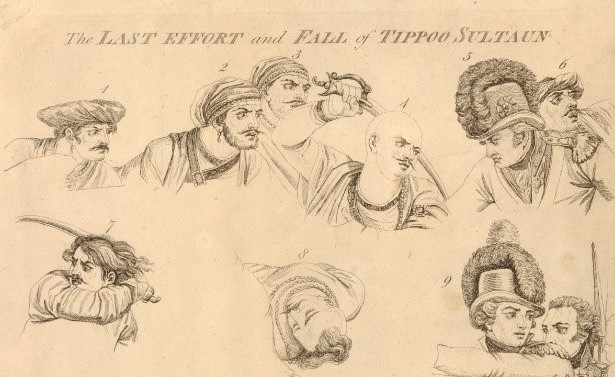 Underneath the main image is a smaller image that shows Tipu Sultan’s surrender to the British in 1792, when his two sons were taken hostage by Lieutenant-General Lord Cornwallis, Governor-General of India. 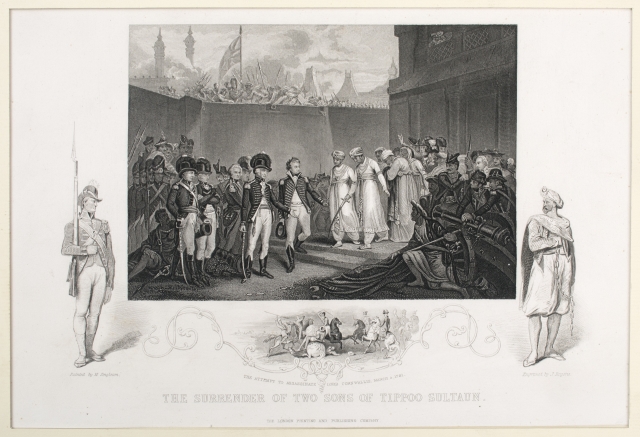 The Surrender of Two Sons of TipU Sultan is another from the series by Henry Singleton. In this image, his son's - Abd al-Khaliq and Muizz al-Din can be seen presented to the British as his payment of reparations following the Treaty of Mysore. They were received into the personal care of Lord Cornwallis.

Underneath the main image is a smaller image that shows an Attempt to Assassinate Lord Cornwallis, 1701. 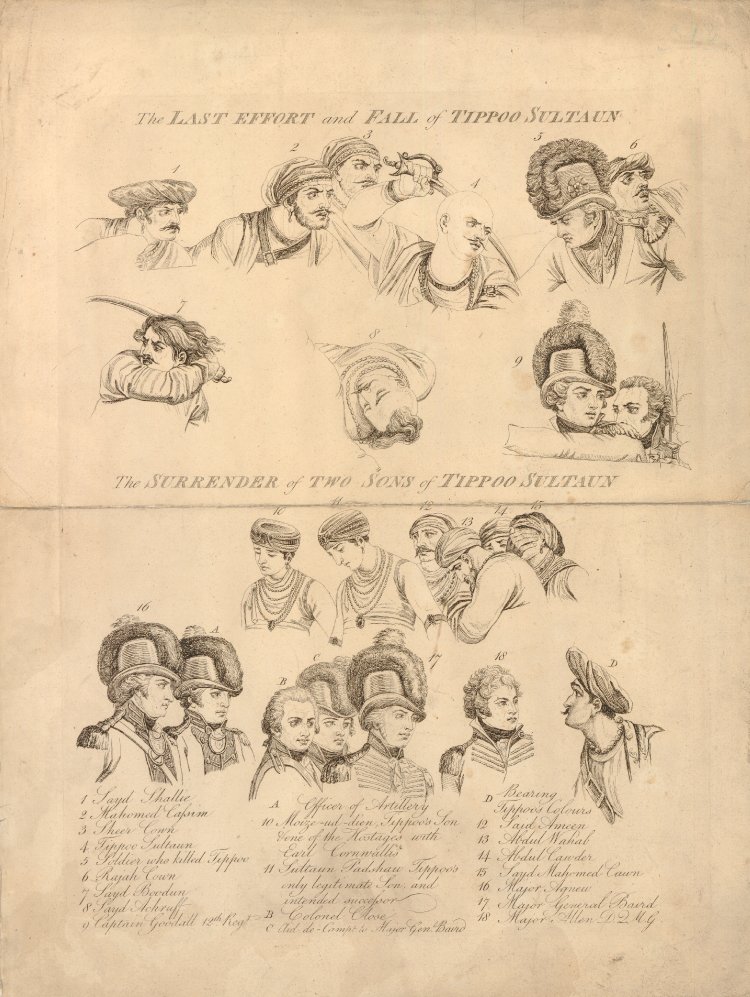 A description key to two paintings by Henry Singleton notes the important figures in the two engravings. First, The Last Effort and Fall of Tipu Sultan; and second, The Surrender of the Two Sons of Tipu Sultan.

THE ASSAULT AND TAKING OF SERINGAPATAM; THE LAST EFFORTS AND FALL OF TIPU SULTAN; THE SURRENDER OF TWO SONS OF TIPU SULTAN; AND THE BODY OF TIPPOO SULTAUN RECOGNISED BY HIS FAMILY

Rembrandt and his Mughal Art