In reading about the Bhulabhai Desai Institute, one can acquaint themselves with a few historically important personalities who supported contemporary Indian art in the 1950s and 1960s by nurturing talent and providing an international stage and platform for many of them. 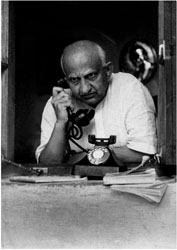 Bhulabhai Desai came to Bombay in 1905 and joined Bombay High Court as an advocate. He worked closely with Gandhiji - Desai-Liaquat Pact and the INA Soldiers Judgement marked important landmarks. His son Dhirajlal B. Desai became India’s first ambassador in Switzerland and was married to Madhuriben Desai.  Warden road in Breach Candy was renamed to Bhulabhai Desai Road after him.

Bhulabhai’s daughter-in-law Madhuriben Desai was an archaeologist, an art connoisseur, and educationist who undertook many projects and edited many books such as Ancient Monuments of India (Edited by her and Douglas Barrett), The prehistoric background of Indian culture (by her & Douglas Hamilton Gordon), Sculptural Monuments, and others. [i]. Soon after Dhirajlal Desai’s early demise at the age of 42, on 22nd June 1951, Madhuriben put her efforts and energy in building Bombay’s art scene, by creating Bhulabhai Desai Memorial Institute (BDMI).

“At about the same time, I think it was in 1957, we were asked to leave the premises in Flora Fountain, where we had been holding our rehearsals for the past six or seven years. The search began for a new place. On Bhulabhai Desai Road was the famous bungalow of Mr. Bhulabhai Desai. Mr. Desai had been a distinguished barrister and a Congress leader during the freedom struggle."

After his death, a trust had been formed and the bungalow had been converted into the premises of the Bhulabhai Desai Institute. One of the practices of the Institute was to rent rooms to artists on a nominal fee of one rupee per day. Here they could work in peace. The chief trustee was Mr. Desai's daughter-in-law. "She was aware of IPTA's activities and was sympathetic to our work. So, when we approached her for the use of some rooms to conduct our rehearsals, we were warmly welcomed". Mr. Soli Batliwalla, the manager, was also very helpful to us. It was here that we started work on Annabhau Sathe's (theatre) Imandar”[v]

Ebrahim Elkazi separated from the Theatre Group and established his Theatre Unit at the Bhulabhai Desai Memorial Institute. Wooden benches were made on the terrace and performances took place, in an intimate setting[ii]. Ravi Shankar’s now very famous music school Kinnara School of Music started here as well. Studio space was also provided to a lot of dancers and other artists of various genres. MF Hussain, Ebrahim Alkazi, and Pandit Ravi Shankar were amongst the more well-known personalities who had availed of this facility. 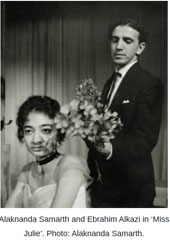 The list of performers and artists who visited the intimate space and/or had their studios is enormous. Gaitonde, Dashrath Patel, Husain, Prafulla Joshi, Homi Patel, Nalini Malani (who got a studio, even though she was a first-year student0, and many others.

“I met people like (Ebrahim) Alkazi, Satyadev Dubey (she went on to work with him as well). That’s also where I met Alaknanda Samarth, with whom I worked later. I would go to the studio at 6 am, and there would be Annapurna Devi doing her riyaaz, which was a magical experience. I can never forget those moments of listening to a morning Raag and eventually I got very interested in Hindustani classical music. All of these factors embellished my work,” [iii]

Sylvester Da Cunha, Nisha Da Cunha, Gerson Da Cunha who shuffled between Theatre Group and Theatre Unit[iv]. Harihar Jariwala who changed his name to Sanjeev Kumar when debuted in Hindi Cinema and Jatin Khanna better known as Rajesh Khanna, Gieve Patel, Anjolie Ela Menon who held her first exhibition in Bombay at BDMI, Nissim Ezekiel and Rati Mehta’s piano class was conducted here as well and much more… A.K Hangal who required space for rehearsals got a room for one rupee a day.

One can only imagine the overflowing talent that arrived at the doorsteps of BDMI, Mumbai, and got space, no one seemed to be turned away. Soli Batlivalla accommodated an entire generation of talent in a two-story bungalow, where they were nurtured, constructive criticism took place, got inspired, and had deep thought-provoking discussions, performances, collaborations, exhibitions, and so much more. 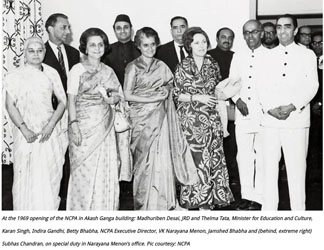 After the bungalow was demolished and the building Akash Ganga came up, the National Centre of Performing Arts (NCPA) rented its first floor for five years, paying rupee one for each year, thus coming into existence, before moving to its Nariman Point location. BDMI continued to live on even after the building Akash Ganga came in its place, but its notion changed with its infrastructure. With Jehangir gallery established in 1959,, the art scene expanded and artists moved out of the institute. NCPA was established in 1969 with Dr. VK Narayana Menon as it’s Executive Director.

Bhulabhai Desai Memorial Institute has had a glorious past, this is a partial attempt to recapture it. 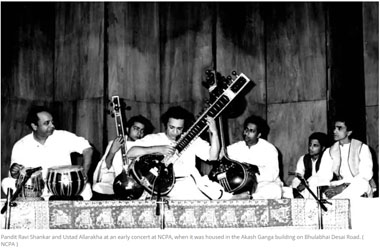