"My father, a multifaceted man, was far ahead of the times. His thirst for knowledge led him to explore avenues of learning beyond scholastic and academic boundaries. He would travel to Mumbai frequently to collect books on various subjects ranging from painting to photography and embroidery to film making. These books were imported from Britain by Englishmen who had big stores in Mumbai. 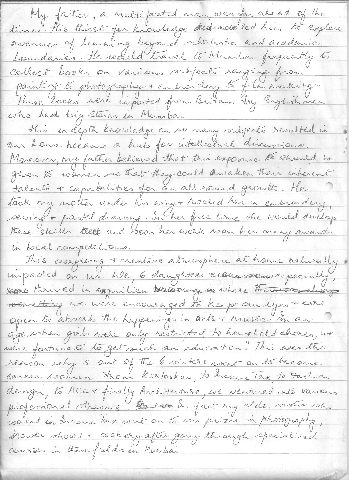 His in-depth knowledge of so many subjects resulted in our home becoming a hub for intellectual discussions. Moreover, my father believed that this exposure should be given to women so that they could awaken their inherent talents and capabilities for all-round growth. He took my mother under his wing and tutored her in embroidery, sewing, and pastel drawing. In her free time, she would develop these skills and her work won her many awards in local competitions. This energising and creative atmosphere at home naturally impacted on us.

"We, 6 daughters especially thrived in a milieu where we were encouraged to keep our eyes and ears open to absorb the happenings in arts and music"

In an age when girls were only restricted to household chores, we were fortunate to get such an “education”. This was the reason why 5 out of the 6 sisters went on to become career women. From Kirloskar to Income Tax, to Fashion design, to ACC, and finally architecture, we ventured into various professional streams. In fact, my elder sister who worked in Income Tax went on to win prizes in photography, flower shows, and cookery after going through specialized courses in these fields in Mumbai. 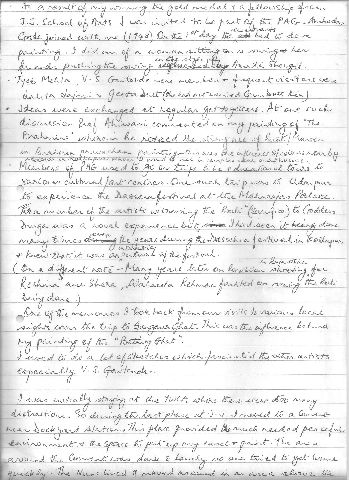 As a result of my winning the gold medal and a fellowship from J.J. School of Arts, I was invited to be part of the PAG. Ambadas Gade joined with me (1948). On the 1st day, new entrants had to do a painting. I did one of a woman sitting on a swing and her friends pushing the swing in the style of Amrita Sher-Gil.

Tyeb Mehta, V.S. Gaitonde were members and frequent visitors were Lalita Lajmi and Geeta Dutt. (she had not married Guru Dutt then)

Ideas were exchanged at regular get-togethers. At one such discussion, Prof. Ahiwasi commented on my painting of "The Brahmins" wherein he noticed the strong use of Rust/ Maroon in Brahmin pravachan painting- this was the influence of colours worn by widows in Kolhapur whom I used to see in temples near our house.

Members of PAG used to go on trips like educational tours to various cultural/ art centres. One such trip was to Udaipur to experience the Dassera festival at the Maharajas Palace. For a number of the artists witnessing the Bali (sacrifice) to Goddess Durga was a novel experience but I had seen being done many times over the years during the Dussehra festival in Kolhapur and knew it was an intrinsic ritual of the festival. (On a different note - Many years later on-location shooting in Rajasthan for Reshma Aur Shera, Waheeda Rehman fainted on seeing the Bali being done)

One of the memories I took back from our visits to various local sights was the trip to Gangaur Ghat. This was the influence behind my paintings of the "Bathing Ghat".

"I used to do a lot of sketches that fascinated the other artists, especially V.S. Gaitonde"

I was initially staying at the YWCA where there were too many distractions. So during the last phase at J.J., I moved to a convent near Dockyard Station. This place provided the much needed peaceful environment and the space to put up my easel and paint. The area around the convent was dark and lonely so one tried to get home quickly. The nuns lived and moved around in an area above the dining hall below which were living quarters. There were girls from Tamil Nadu and even Sri Lanka - I was fascinated by the draped fabric that the Sri Lankan girls wore. All students/ working girls and sometimes visitors or guests stayed in the living quarters. 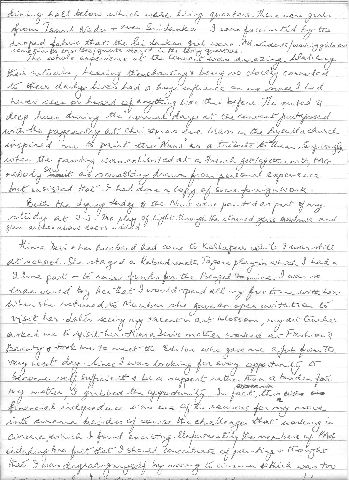 The whole experience at the convent was amazing. Watching their rituals, hearing them chanting, and being so closely connected to their daily lives had a huge influence on me since I had never seen or heard of anything like this before.

"The muted and deep hues during the normal days at the convent juxtaposed with the pageantry at Christman Eve Mass in the Byculla church inspired me to paint the nuns as a tribute to them."

Surprisingly when the painting was exhibited at a french get-together with PAG, nobody saw it as something drawn from personal experience but insisted that I had done a copy of some foreign work. Both the Lying Lady and the Nuns were painted as part of my study at J.J. The play of light through the stained glass windows and glass arches above doors added.

Hima Devi and her husband had come to Kolhapur while I was still at school. She staged a Rabindranath Tagore play in which I had a 2 line part - to raise funds for the Bengal Famine. I was so enamored by her that I would spend all my free time with her. When she returned to Mumbai, she gave an open invitation to visit her. Later seeing my talent in art blossom, my art teacher asked me to visit her. Hima Devi's mother worked at Fashion and Beauty and took me to meet the Editor who gave me a job from the very next day. Since I was looking for every opportunity to become self-sufficient and be a support rather than a burden for my mother, I grabbed the opportunity. In fact, this financial independence was one of the reasons for my move into cinema besides of course the challenges that working in cinema, which I found exciting.

"Unfortunately, the members of PAG including K.H. Ara felt that I should concentrate on painting and thought that I was degrading myself by moving to cinema."

From Fashion and Beauty, I moved to Eve's Weekly.

"My last painting was of Mahatma Gandhi and Kasturba in Black and White for the Independence Day Issue - 15th August 1947."

In 1966 I received a six-month scholarship to Paris to study Fashion design from the French Government. Interestingly they called me in last for the interview because as they said, my resume was the longest. At that time I had just finished work on Amrapali. 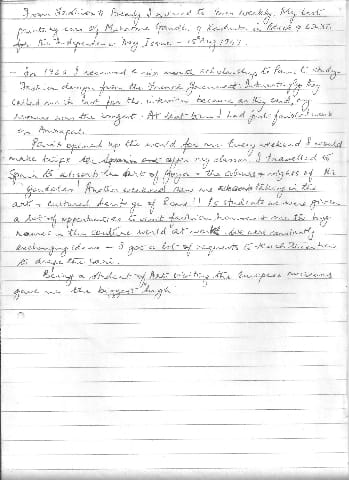 Paris opened up the world for me. Every weekend I would make trips after my classes. I travelled to Spain to absorb the art of Goya and the colours and sights of the gondolas! Another weekend saw me taking in the art and cultural heritage of Rome!! As students, we were given a lot of opportunities to visit fashion houses and see the big names in the couture world at work. We were constantly exchanging ideas - I got a lot of requests to teach them how to drape the sari. Being a student of Art, visiting the European museums gave me the biggest "high".

VS Gaitonde's Paintings - Technique And Processes