In these personal notes by Bhanu Athaiya, she fondly recalls her mother Shantabai with deep gratitude, love, and pride. She deems her mother the enabler of her success, dreams, and aspirations. Read on to know more.

I have a lot to thank my mother for. She gave me encouragement and guidance in my early years, enabling me to pursue my dreams and aspirations. If my father gave me the initial exposure to the beauty and creativity in the field of arts, it was my mother who nurtured this love for the arts and encouraged me to discover my potential in the world of art. 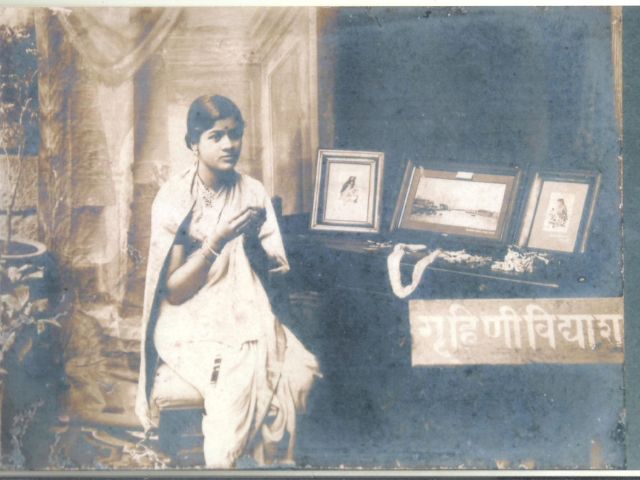 Portrait of Shantabai. Bhanu's mother specialised in the Edwardian style of embroidery

She was definitely ahead of her time, she owed the growth of her personality to her parents and later on to her husband. As a young girl way back in the second decade of the 20th Century. She had been sent all the way to Poona from her native Kalsapur to study in a school run by the great educationist and social reformer, Dhondo Keshav Karve.

At that time, it was rare for a woman to receive formal education. By exposing her to the world of learning, her parents enabled her to take the first step toward maturity. Later, when she married my father at the age of 17, the education process continued with greater prowess. The love and encouragement she received from my father gave her more confidence in herself and enabled her to grow as an individual every day. My mother was a very beautiful woman of noble bearing, and great strength of character. She was a very loving, warm, and caring person. She had a very happy marriage with my father and bore him seven children. Growing up in such an atmosphere of love and affection was a wonderful experience and I have many lovely memories of the wonderful times we had together.

She was only 35 years old when Baba died. At the time of his death, we were six sisters and one brother, the youngest, my sister was only 10 months old. His death was a great blow to us all.

We never knew the extent of her loss because she bore the loss in quiet dignity.

Any other woman in her place would have gone to pieces but she bore the ordeal of bringing up seven young children alone and socially. There was never a frown on her beautiful serene face even at the worst time of her life. Work carried on as usual, as it would have, had my father been alive.

The ancestral house and estate had to be managed for one thing. Although there was an estate manager in our service for years on end, his work had to be supervised. The male heir, my brother was a minor hence the family property was under the court of ward supervision. It fell upon her to constantly keep track of what was happening to the farmlands and their produce. Besides, there was also the sprawling 300-year-old mud & brick house with a tiled roof which had to be constantly seen due to the very nature of the materials used. 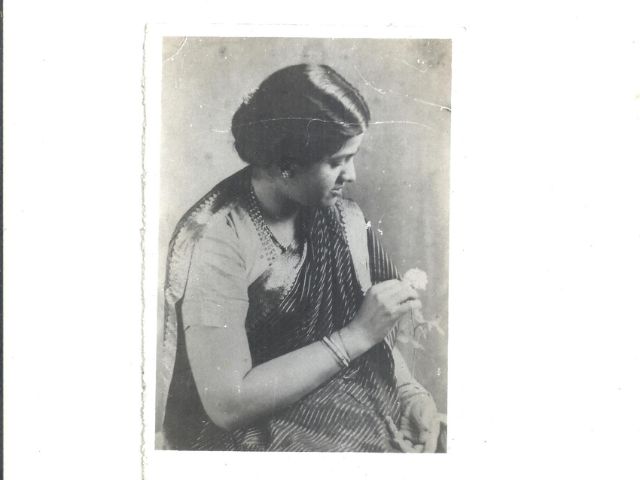 Thus, she became our sole caretaker, carrying on family, household, and other duties. All the traditions and rituals that had been observed by our ancient family for generations were contrived, down to the minutest detail. She never failed in her duty to her family and towards family Gods.

I cannot remember her ever uttering a harsh word to anyone or losing her temper. She was always a picture of patience. She had a tremendous sense of duty and belief in doing her best. The rest she left in God's hands.

Perhaps it was this faith in God that was the secret of her serene radiant expression that shone on her face always. It would indeed seem that faced with a calamity, my mother always rose to the occasion with strength and poise. And commonsense prevailed.

I still remember an incident that took place in the late 40'S. When we were young children. There was a calamity. One night when we were still sleeping, a fire broke out in the school building that lay adjacent to our house. The house had been divided into two portions. While we occupied one half, my uncle held the other half. Hence although it was the same house, there was a thin wall between the two. My uncle himself did not live there but had neighbors who alerted us about the fire next door. Apparently, people from the neighbourhood saw the flames leaping out of the roof and rushed to wake us up. Others went to the temple to ring the big bell to announce the calamity to the whole town and to enlist help in dousing the flames.

My mother woke us up and hurriedly packed us kids off to a neighbour's house away from possible danger. She stayed back though, to personally supervise the shifting of important items from the house in case the fire spread to our living area.

On hearing the bell, hundreds of people came forward to help curb the flames. One fire engine came to the rescue, but since there was a water pressure problem, the water had to be manually filled into the tank for the hose to be able to be used to douse the flames. Work had to be done manually and fast, bucket after bucket of water was drawn from the well in the backyard of our house and passed down the line by a human chain to the area where the fire was raging.

Unfortunately, in spite of these Superhuman efforts, the operation was not successful, It was impossible to bring the fire under control with such limited resources, It kept spreading, and finally, the entire building was down. Although some of the beams of the rooms adjacent to the fire were burnt the rest of the structure remained out of danger in spite of the proximity to the danger. Throughout the night's proceedings, my mother was present on the scene of the tragedy with such cool calm and confidence that amazed everyone.