Bhanu Rajopadhye Athaiya (b. 1929) was born in her 300-year-old sprawling ancestral house in the heart of Kolhapur. Bhanu grew up surrounded by indigenous and western political, social and cultural influences. Her ability to translate all this information into the medium of cinema and art made her the first Indian ever to win an Oscar. Bhanu Athaiya is not only recognised as the revered doyenne of Indian costume designers; but also a remarkable modernist artist. 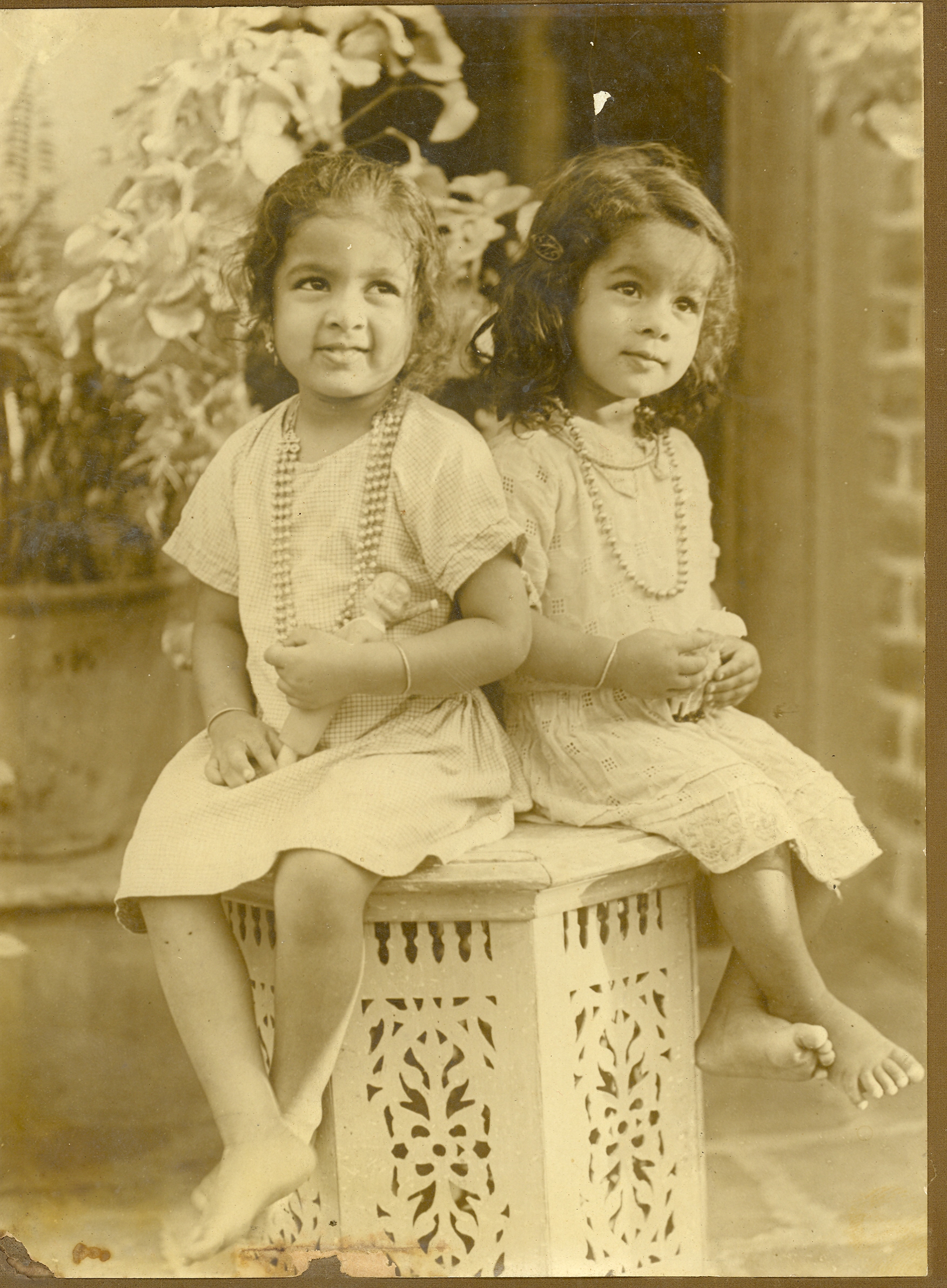 The city of Kolhapur in southern Maharashtra is often called Kalapur, a city of the arts: a tag that originated in the early twentieth century. This former princely state was once amongst the most significant on the map of royal India during Chhatrapati Shahu Maharaj's reign. (1874-1922) 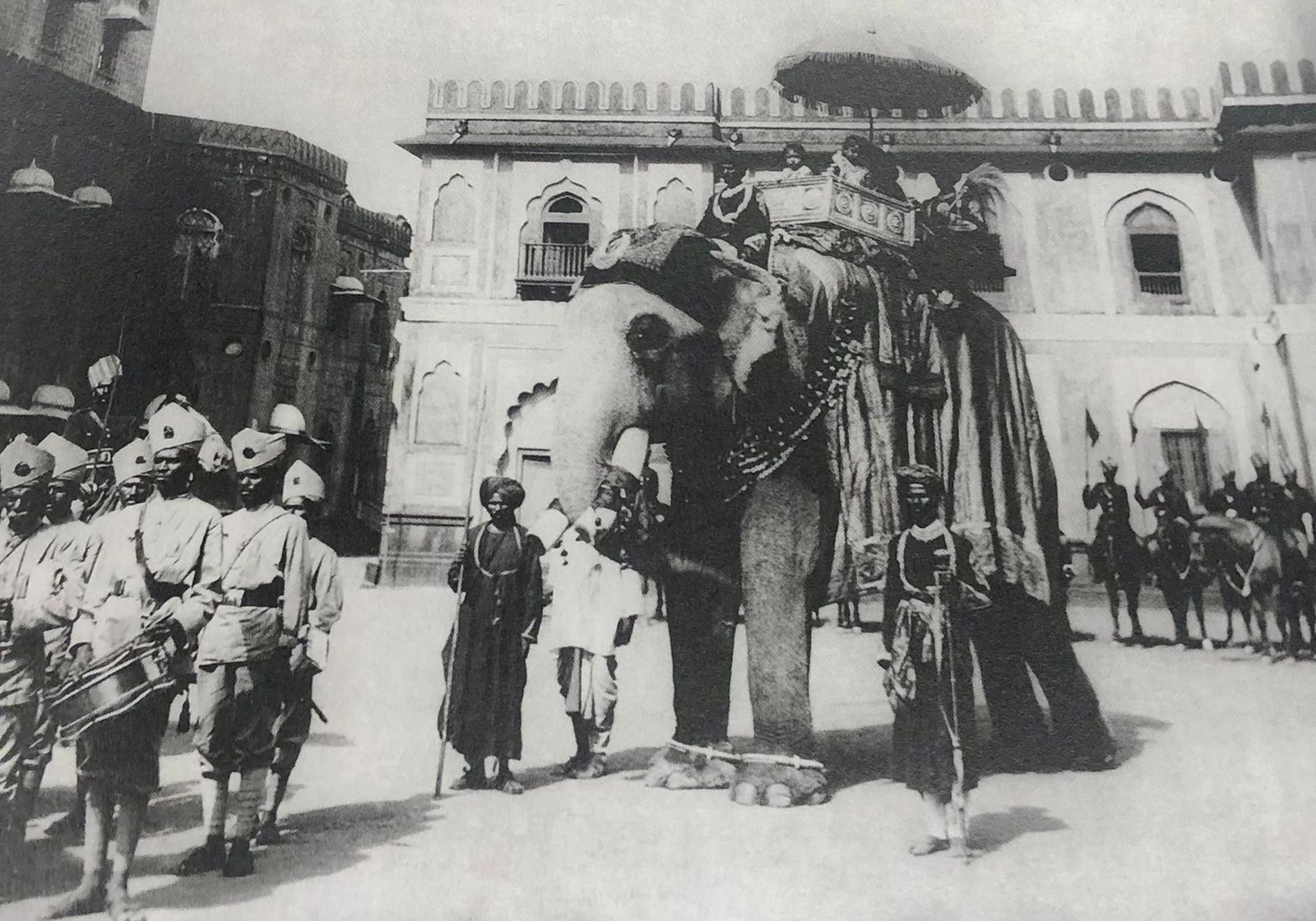 The entrance gate of the Old Palace in Kolhapur

Bhanu Athaiya recalls the entrance gates of the Old Palace in Kolhapur, flanked by elephants showcasing the pomp of the ruling family. Bhanu would spend half an hour every day on her way to school watching the graceful movements of these majestic animals. In her book The Art of Costume Design, Bhanu reminisces;  "The enormous animals constantly shifted their weight from one foot to another, picking up the grass from the ground and throwing it on their heads in a playful manner. Sometimes we would offer them bananas." [1] 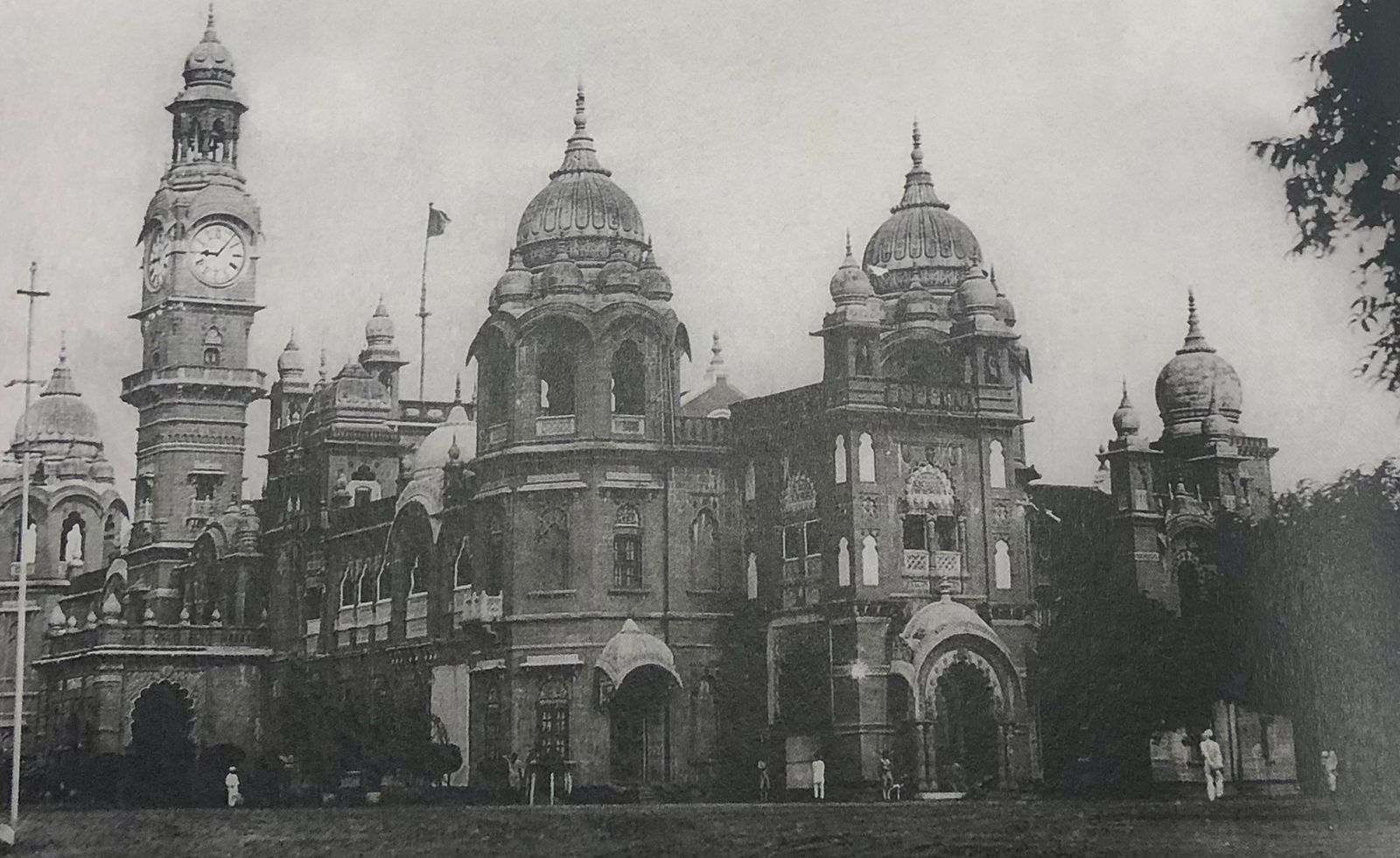 A remarkably progressive ruler, Shahu Maharaj challenged the stranglehold of the Brahmin caste over administrative posts and educational opportunities in his state. Coupled with sweeping social and educational reforms, his policies helped free the depressed classes from their traditional shackles and unleash their creative and entrepreneurial skills. With support from the state, various gifted individuals emerged as early adopters of the new modes of cultural production that were evolving in the port cities of British India. Modern visual technologies such as illusionist painting, photography, and cinema took root in this princely state.

In Kolhapur, the 1920s were a period of great cultural ferment. Here, the artisan class came into its own to create an artistic and technological revolution. The charged artistic and creative atmosphere at that time influenced Bhanu's sensibilities in more ways than one. 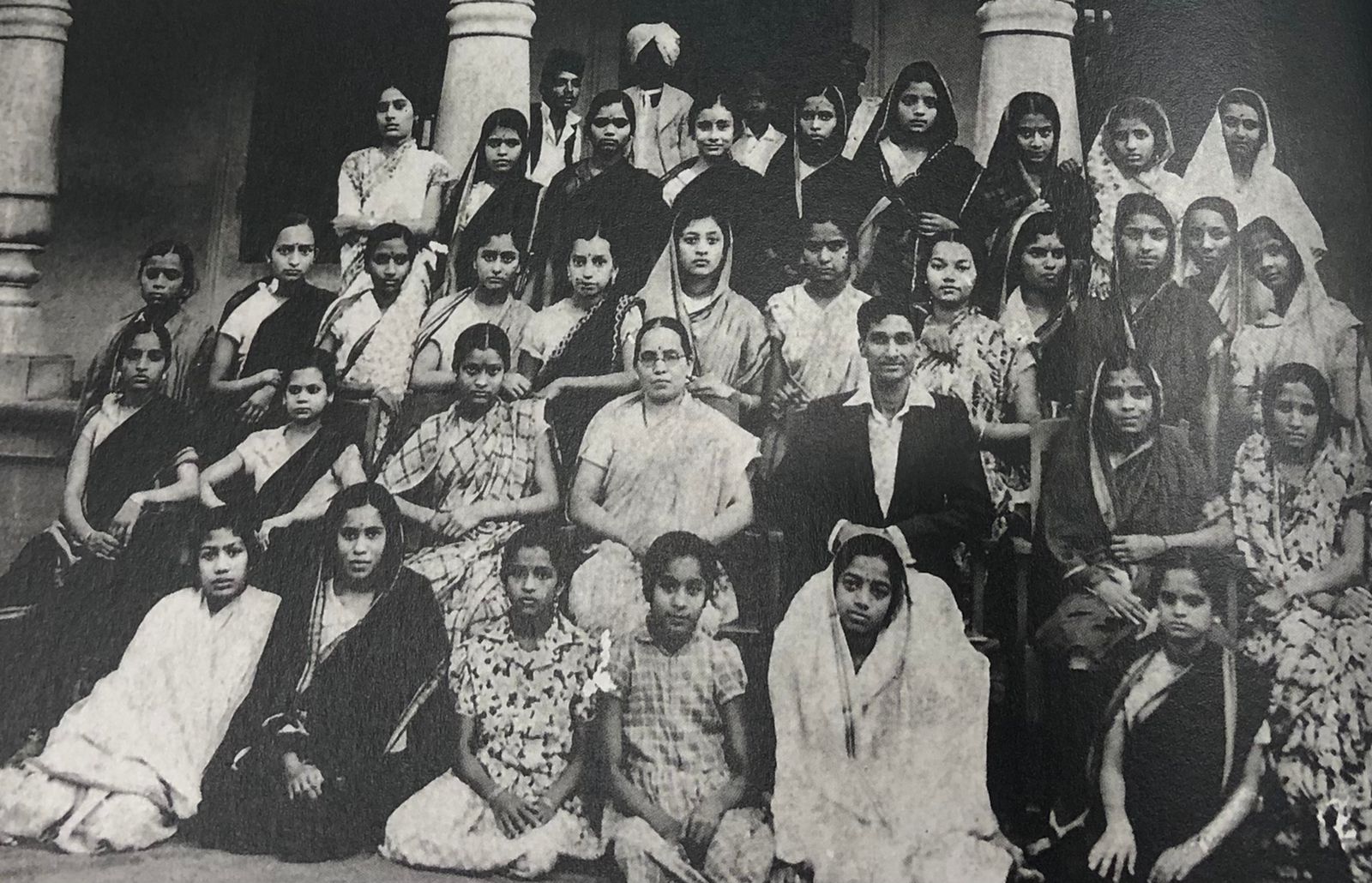 Bhanu Athaiya is seated centre first row in a photograph of staff and students from the Maharani Laxmibai Girls School. Her art teacher Shashikishore Chavan is seated behind her; third from right.

Bhanu Athaiya did her schooling at the Maharani Laxmibai School, set up by the maharani herself. She recalls her days at school where students would sing the then-national anthem Vande Mataram every morning. Otherwise a Marathi medium school, English was taught in the last three years of schooling. In the second-last year, Bhanu received a prize of Rs. 30 for the best English essay.

With a natural inclination towards the creative field; Bhanu Rajopadhye made art an after-school activity. Something she would delve deep into and find solace in after a long day. Her art teacher Shashikishore Chavan recognised this and wanted her to nurture this hobby into a passion. He was impressed with the skills she had acquired at such a young age and encouraged her to pursue Fine Arts. Finally, Mr. Chavan took her to the J.J. School of Art to further her creative endeavours.

It was my father Annasaheb Rajopadhye who made the move to contemporary and modern thinking while keeping alive the traditions of my ancestors. He was a self-taught artist and would study painting techniques from art books. He would make frequent visits to Bombay and bring back books on European painters like Leonardo Da Vinci and Rembrandt among others. He would allow me to look at these books one at a time, and then ask me to put them back on the shelf carefully. After my father finished his work, he would ask me to wash the brushes and clean the palette. I was just a little girl of seven or eight then, and would have fun playing with the leftover paints. [2]

Bhanu Athaiya’s creative uprising unfolded during her formative years. Her father, Annasaheb Rajopadhye, was a painter, an avid photographer, and a filmmaker. Although he died when Bhanu was barely 10 years old, Annasaheb was his daughter's deepest inspiration. His teachings would continue to inspire the future artist and costume designer. He directed several films in Marathi and Hindi and encouraged everyone in his family to pursue their individual artistic talent. 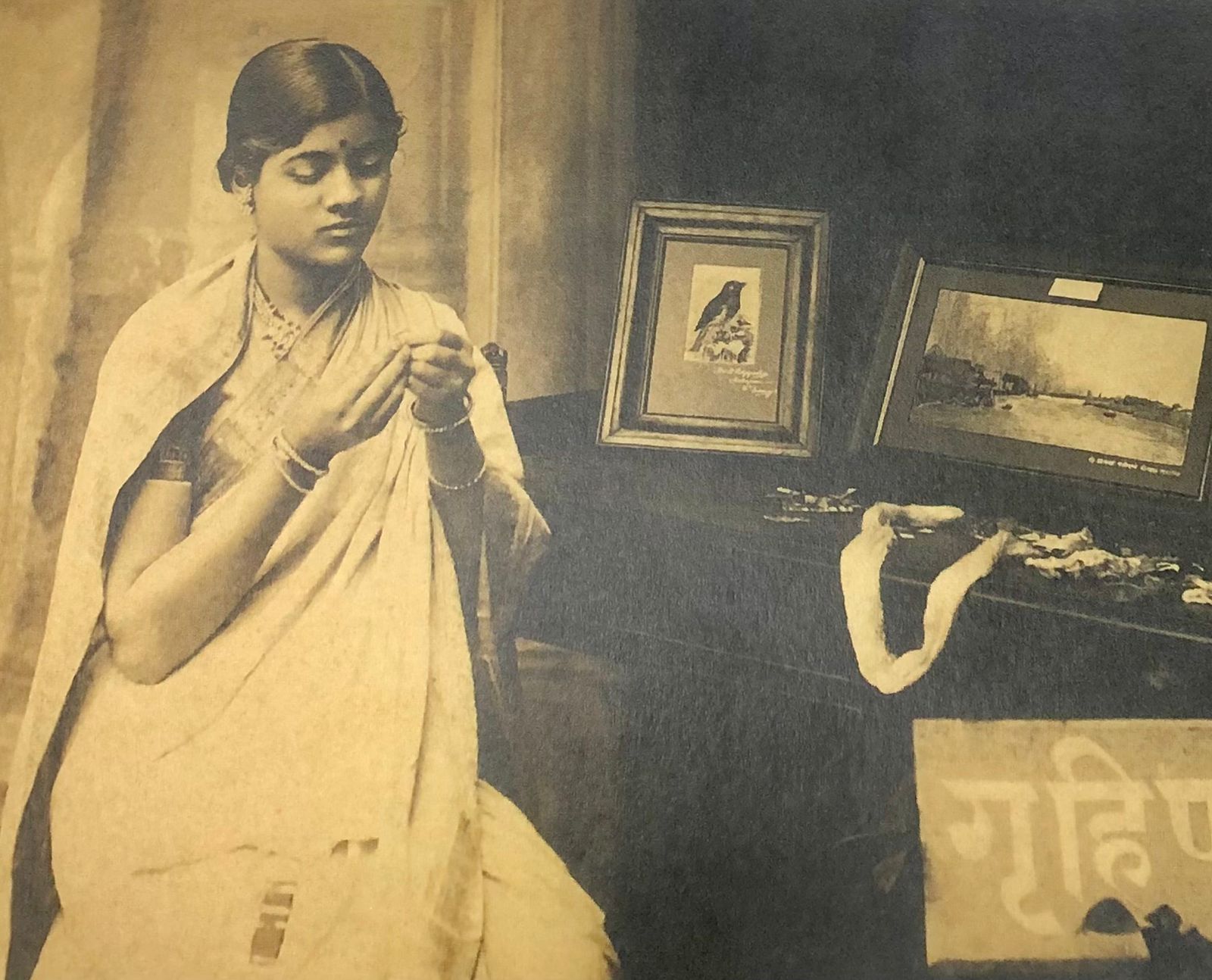 "This portrait of my mother Shantabai was photographed by my father. She was married to him at the age of 17, but my father insisted that she continue enhancing her many accomplishments. My mother specialized in the Edwardian style of embroidery." [3]

Bhanu's father relentlessly pursued his creative talents and encouraged his family to do the same. He bought fine silk skeins for Bhanu's mother Shantabai to create compositions of birds and landscapes and books on embroidery patterns. He also bought her a Singer sewing machine and other tailoring paraphernalia. He would bring along catalogues with fashion plates showing pictures of hats, fur coats, gowns, pretty blouses, and pullovers from the Army and Navy Stores. Noticing Bhanu's interest in art, his father engaged a person to teach her papercraft when she was eight years old. Bhanu continued to do cutwork portraits of national leaders such as Mahatma Gandhi and Subhash Chandra Bose. 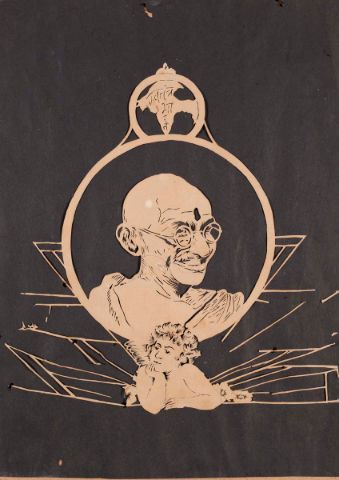 Bhanu Athaiya's childhood revolved around creativity. Many artists visited her home in Kolhapur. One of them was the Marathi film pioneer Baburao Painter, who would often have prolonged conversations about film, art, and photography with her father. 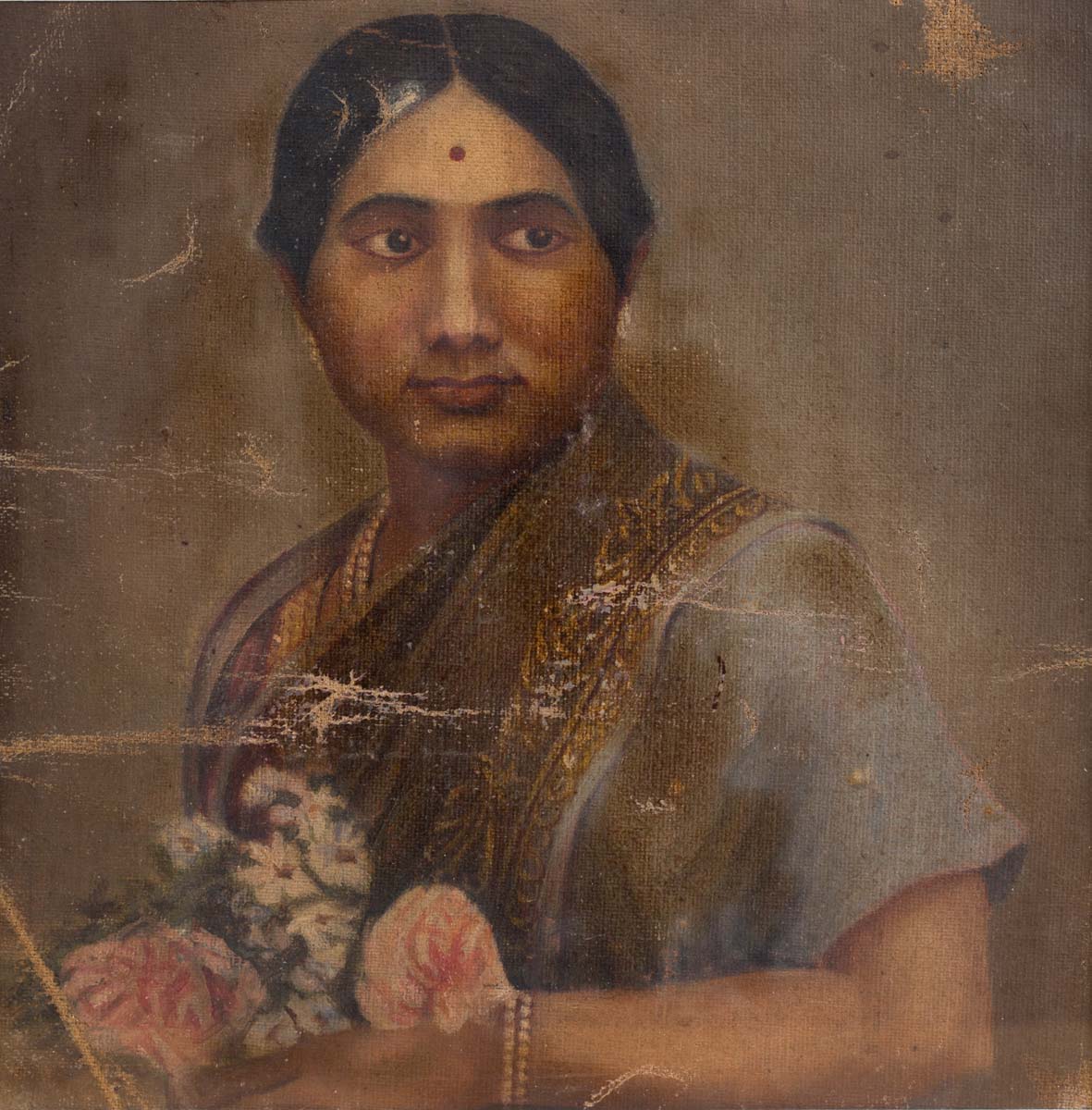 This was also the time when her father introduced Bhanu to Western Cinema. Films from Bombay and various places were screened at Kolhapur. It was Baburao Painter who put Kolhapur on the film map of India. He would also paint in oils, make large sculptures and paint the backdrops of famous singer and theatre personality Bal Gandharva's plays. Painter eventually made 26 films between 1920 and 1952. Bhanu's father Annasaheb also worked as an assistant on a few of Painter's films. In fact, Annasaheb Rajopadhye made a mythological film called Mohini with Usha Mantri as the heroine. Bhanu was eight years old then, and her father gave her the role of a prince! 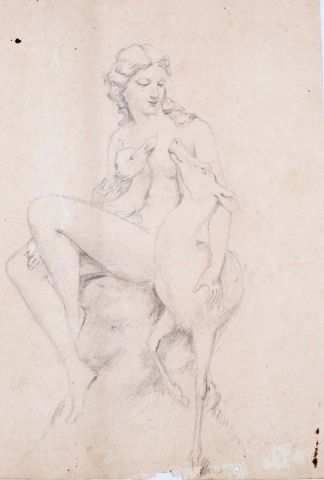 Coming to Bombay by Bhanu Athaiya, circa 1948

After school, Bhanu would do artwork exercises for two hours every day. Her art teacher Shashikishore Chavan was one of the most encouraging influences in her early life. On completing her last year in school, she received three prizes for her painting, Coming to Bombay (shown below). Bhanu's father had passed away and her teacher persuaded her mother to send her to the J.J. School of Arts in Bombay. Her mother supported her daughter, and soon enough Bhanu wrote to Hima Devi (whom Bhanu had met in Kolhapur during her play Red Oleanders) requesting temporary accommodation at her Khar residence. Hima Devi agreed and asked her to stay with her as part of her family. This was how Bhanu's journey to Bombay began.