The Harijan Movement was launched by the Congress leadership in 1932 in accordance to their socio-religious approach to the Dalit caste problem in India. Gandhi was against the use of this movement as a means to strengthen the political activities of Congress and felt like the issue was meant to be dealt with a different strategy. 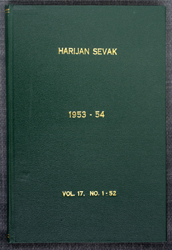 Gandhi’s strategy was to stress that untouchability had no sanction in Hinduism and Hindu scriptures and to encourage Hindus to change their opinion on depressed classes by patient means. He wanted classes to receive the same access to schools, temples, wells, etc so they could feel just as respected in society as others.

On the 25 September 1932, Gandhi broke his fast and decided to call depressed classes ‘Harijans.’ This renaming was part of his campaign against untouchability. 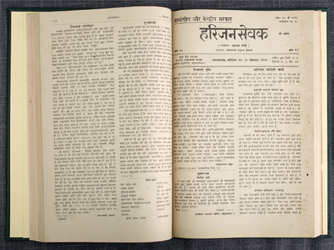 In addition to the Harijan that was published in English, the weekly appeared in other Indian languages too. They were published in Hindi, Gujarati, Bengali, and Tamil with the same content. All editions had a column that gave reports of Harijan work done by congress workers as well as the Harijan Sevaks. The rest of the weekly was devoted to the depressed classes. The Hindi edition of the Harijan was called Harijan Sevak. It was first published on the 23rd of February, 1933, and was the same size as the English edition. The editor was Viyogi Hari and was published in Delhi by the Hindustan Times Press. In addition, Gandhi also led a Harijan Tour in 1932- 1934 in several towns and cities in India to talk to the public regarding the untouchability issue. This was planned by the Harijan Sevak Sangh secretary A.V. Thakkar.

Soon after, he established the All India Anti Untouchability League or the Harijan Sevak Sangh. Members or Caste Hindu reformers were called Harijan Sevaks. In 1932, when Gandhi was arrested his journal Young India was discontinued. To popularize the Harijan movement, Gandhi decided to introduce a new journal under the same name of Harijan. The first issue appeared on the 11th of February 1933 from Poona with R. V. Shastri as the editor. Harijan dealt with questions regarding untouchability and was carried out in the socio-religious approach.

The Harijan was later edited by Mahadev Desai in 1935 and had its headquarters in Poona and then later in Madras. In 1940, it was suspended during the Indian Satyagraha movement. It was later revived by the Navajivan Press in January 1942 but was banned later that year by the British Government in India. It was revived once again in February 1946. The editor at the time was Pyarelal and he continued till 1948. The journal stopped in 1958. Gandhi felt that the untouchability problem was caused by Hindus and was meant to be rectified by them too.