Each time young Homi Wadia entered the set with his producer-director brother J.B.H. Wadia, his eyes would light up like a kid in a candy shop. His gaze was not stuck on fantastical costumes or the star-studded cast but set on the camera. This demonstrated his childhood aptitude for mechanical processes and all things technical. It was not long before he decided to dispense his studies and join his brother in the art of film making.

J.B.H. Wadia's love for cinema was contagious and ultimately caught by his younger brother, Homi Wadia. Initially, Homi would accompany his brother to the movies screened in Bombay's cinematheques. His growing fascination with cinema was further fuelled by his visits to the sets of J.B.H Wadia's first film Vasant Leela in 1928. In one of his interviews, J.B.H Wadia also admits that he was the one who nurtured Homi's interest in cinema:

Homi is my younger brother by almost 10 years. When I was in college, he was schooling. I would take him with me to see films. I was responsible for creating an interest in cinema in Homi. When I started with Vasant Leela in 1928, Homi was not even a matriculate; he was in the 6th or 7th standard and would come with me whenever he didn't have to go to school. He would move about with me and he began to be interested in movies genuinely – especially on the technical side. [1]

After Vasant Leela, J.B.H. Wadia began providing a post-production service under the name of Wadia Film Exchange, a humble laboratory with a cutting room and a gradually growing film distribution network. For all this intensive work, J.B.H had one constant support, his brother Homi who was still at school back then but drawn to the studio complex every afternoon. Soon enough after a number of family quarrels - Homi joined the business as a studio partner.

So enamoured was Homi by the world of cinema that he decided to express his desire for filmmaking to his brother no later than his first day of college. The Wadia household was strictly against this including his elder brother. However, Homi's determination and passion soon convinced J.B.H. Wadia to take Homi under his tutelage. After convincing his mother Dhunmai, Homi started his film career, learning laboratory work at the Vivekananda Laboratory and the Devare Film Laboratory. In 1930, he bought a second-hand Pathe Camera and effortlessly picked up the required skills. His interest in the technicalities of camera and cinematography nurtured him into an efficient cameraman while working with Devare. 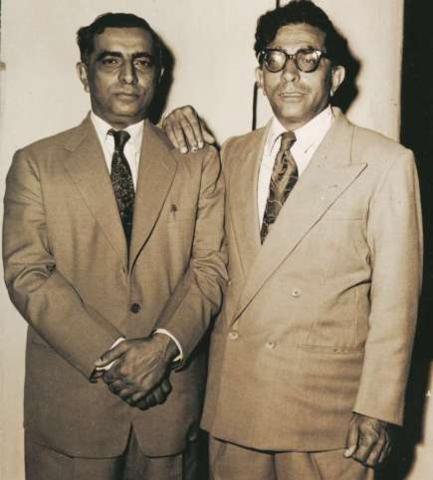 Both J.B.H and Homi were ardent believers in the possible coexistence of silent and sound films. Under his brother's guidance, Homi Wadia co-directed his first silent film and did the camera work for Thunderbolt - an Indian pendant to Douglas Fairbank's The Mark of Zorro. The script was ready and Homi's excitement knew no bounds. He used an ancient camera bought for 500 Rupees to shoot the entire film. Homi was also in charge of casting the lead actor, and soon enough the task of directing the film was handed over to him. The film was shot in ten days and was a great success at the box office.

It was called Thunderbolt or Dilair Daku (1931). We bought a Pathe camera from Kohinoor for Rs.1,000. Dave was paid no fees. The villain, played by Baburao Pai’s brother, also got nothing. Instead, he got second billing as Assistant Director for the free use of his car. The heroine was Mumtaz. She had only four days’ work and was paid twenty rupees per day. The story idea was Jamshed’s. I directed, photographed, and edited the film…I made the film in 2,000 rupees and sold it to the British India Corporation for Rs.3,000. So I decided I had made a neat profit. [2]

Thunderbolt's success provided enough money for the brothers to fully dedicate themselves to producing films. Soon enough the service business, Wadia Film Exchange was shut down. Homi Wadia's next project as a cameraman was the railway thriller Toofan Mail, written and directed by J.B.H, Wadia. This silent stunt film was entirely shot on actual locations and trains in motion. The camerawork was hence not an easy task to be in charge of for Homi. That didn't stop him and he decided to buy a cheap replacement camera to shoot on the tracks for the show-stopping 'train travels over the heroes' heads shot. With Toofan Mail, the Wadia Brothers established their expertise in stunt films.

Homi, just like his brother was a strong advocate of creative experimentation. In Thunderbolt (Dilair Daku), he handpainted a dance scene frame by frame on each of the prints which took over a month to complete.

In 1933, J.B.H. Wadia founded Wadia Movietone. It was not long before the production house became synonymous with the genre of action-packed entertainment. The succeeding half a dozen silent films were directed by J.B.H and photographed by Homi Wadia. And even though Homi took his hands off direction for a bit, the desire still tugged at his heart. However, his reclusive nature stopped him from doing so. J.B.H. Wadia was more articulate, enjoyed being social and making public appearances. Homi preferred to retire to sports clubs after a long day at work.

In 1934, Homi finally expressed his desire to his brother and Billimoria to resume direction and make a film including stunts and action under the banner of Wadia Movietone. He then returned to directing with Veer Bharat, rewritten by J.B.H. from a political drama into a populist detective story. 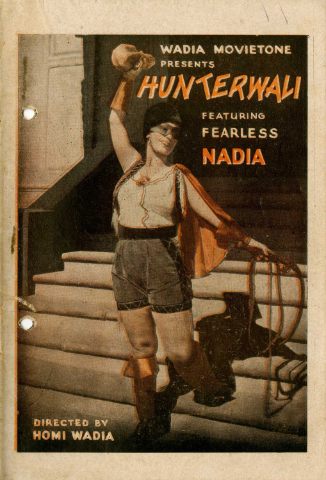 The film Hunterwali, starring Fearless Nadia was Homi Wadia's biggest triumph that established him as a director at the mere age of 24. It also marked the beginning of the stunt film genre, setting ground rules for many more such films to follow.

The male lead was Boman Shroff, the biggest daredevil I have ever met. He would do anything for a dare – a real Irani. Once he jumped off the top of Tata Palace into a moving car for a shot! But what made Hunterwali (The Lady with the Whip) memorable was its heroine: Nadia. She did the best stunts! [3]

Initially, everybody in the studio felt quite out of their element when asked to work with Nadia. Homi took charge and told everybody which scenes were planned while J.B.H was in charge of the screenplay. Homi decided that the opening scene would include Nadia fighting on the roof. The whole scene was shot successfully after which director Homi Wadia gave a little speech:

"The first day of filming was the prelude to a most special film and we should all work together better than ever." [4]

He then congratulated Nadia on her bravery and called her fearless, after which she came to be known as Fearless Nadia. The essential elements of any stunt film henceforth comprised the mask worn by the avenging protagonist (usually a woman), the hunter (whip) she carried, the style of stunts, and the horses and the dog. And even though there were many a stunt film made after Hunterwali, Homi would proudly beam saying, "But we were the best." Wadia stunt films were different in a way that while the others were mostly swashbucklers, they had real stunts. 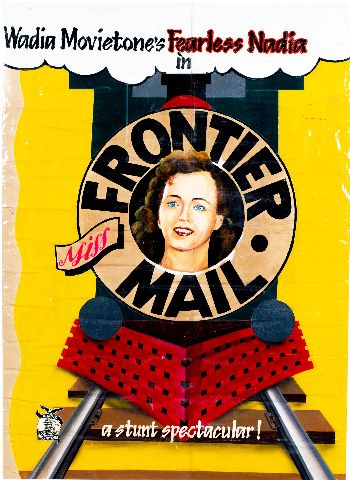 These stunt films were often directed by Homi Wadia as he was rapidly gaining expertise in the arena of stunt filmmaking. While producer Jamshed Wadia would help with screenplays and music. Hunterwali marked the beginning of the Fearless Nadia era and sparked a string of hits like Miss Frontier Mail (1936), Diamond Queen (1940), and Jungle Princess (1942). The incredible Wadia universe included Tarzan-inspired jungles, trains in motion, and edgy stunts. 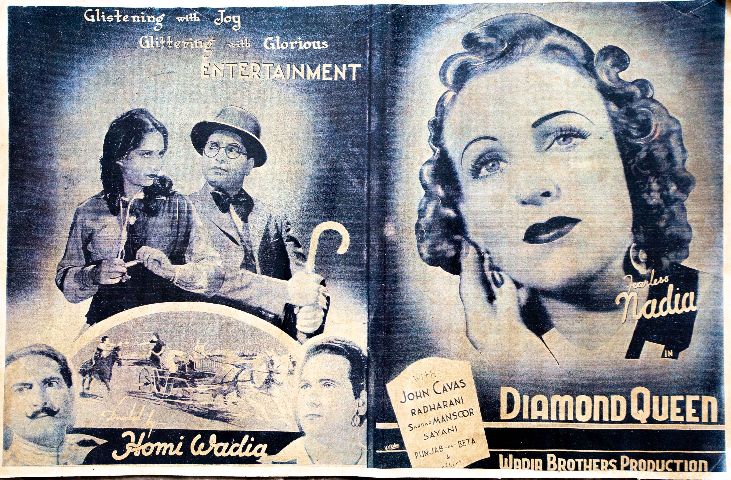 In 1942, after a few artistic differences between the Wadia Brothers, Homi Wadia started Basant Pictures and would direct most of Fearless Nadia's films. Homi wanted to continue the stunt film tradition while Jamshed Wadia wanted to switch to more socially relevant films. However, the duo's camaraderie never came to a halt. Jamshed Wadia would often look after Homi's films' screenplays and music, while Homi would continue to direct his brother's films.

And even though Wadia Movietone was sold to V. Shantaram, Basant Pictures carried forward its filmmaking legacy. The days of stunt filmmaking seemed to be fading away, with the audience's tastes changing from stunt films to social or mythological films. The first mythological to be made under the banner of Basant Pictures by Homi Wadia was Shri Ram Bhakta Hanuman (1948) followed by Shri Ganesh Mahima (1950) and Hanuman Pataal Vijay (1951). Homi's artistic spontaneity and experimentation shined through the 1950s with films like Hatim Tai (1956), his first film in colour. He further went on to make the Tarzan-inspired trilogy Zimbo in 1958. Nadia's last stunt film was Circus Queen (1959) after which she played a prominent role in Khilari (1968), both directed and produced by Homi Wadia.

Homi Wadia married Nadia in 1961. He then retired from his filmmaking career and sold Basant Pictures in 1981, leaving behind a treasure trove of action films and stunt-heavy thrillers.

[1] Transcribed from J.B.H Wadia's extensive interview to NVK Murthy, the historian, as part of an effort by the National Film Archives of India to record the greats of Indian cinema for posterity.

A note on Riyad Wadia

The beginning of the Wadia Movietone Legacy

J. B. H. WADIA AND WADIA MOVIETONE BY SHYAM BENEGAL