India is a country that has had a rich history of hunting. With an abundance of animals and land, big game hunting was very popular and considered to be an elite sport.

People would not only hunt for sport but also for food and occasionally to protect themselves from wild animals when they shared the same environment.

The Wildlife Protection Act was introduced in 1972 by the Parliament of India enacted for the protection of plants and animal species. Before that hunting was legal, however, hunters had their own code of conduct. Hunting was not allowed before sunrise or after sunset. They were encouraged not to kill pregnant or young mothers. Shikar or the Hunt, was also a royal pastime; this was considered to be a masculine sport and something that people could be proud of. 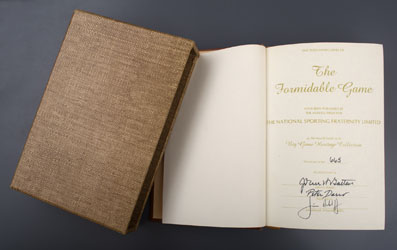 Formidable Game published in 1983 and written by John H. Batten gives an account of hunting in different parts of the world. This particular book is 665 out of 1000 that was published by the National Sporting Fraternity Ltd. 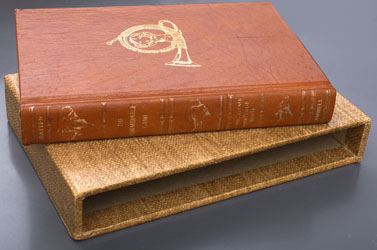 John Batten writes how he and his wife Katie travel the world while giving an account of the various animals that have been shot by them in their respective countries. This volume starts with his trip to India in the 1950s where he introduces tiger hunting and other game. There is also a trip to Africa in 1957 at a time when safari’s where at its peak. He talks about Africa’s Big Five - Leopards, Lions, Rhinos, Cape Buffaloes and Elephants. He hunts wild boar in the Ardennes in Belgium and different kinds of bears (Grizzy, Polar, and Alaskan Brown) in North America. The author also gives an account of the development of the big bore rifle.

Batten provides us with photographs from his personal collection of all his travels and game. His friend Peter Darro has illustrated some of the animals discussed in the book. 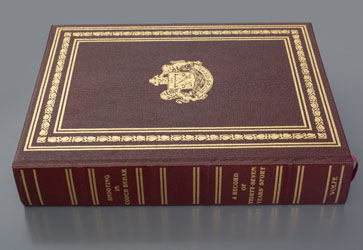 Shootings in Cooch Behar: A Record of Thirty-Seven Years’ Sport was written by the then Maharaja of Cooch Behar and originally published in 1908 by the Times Press in Bombay. 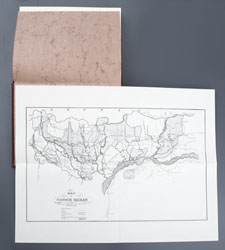 Cooch Behar is currently an erstwhile royal state located in northern West Bengal and is to the west of Assam. With an area of approximately 1300 square miles, it is covered in a network of rivers, streams and marshes as well as natural forests and brushwood and is home to various species of animals and birds. 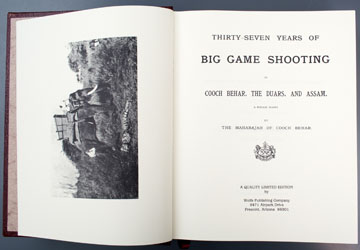 The Maharaja writes a very detailed account of his hunts and catalogs them in a very detailed and almost scientific manner. He keeps account of his kills in a statistical and orderly manner on a yearly basis. There are many tables, illustrations, and plates on the game he collected, the areas where he would hunt, his companions and guests, and even his Nepalese fighting elephants who he used for the hunt. He mentions that the annual shoot in February is anticipated by most people.

There is mention of how he tracks animals like the rhino, buff, and bison and how there is a different method to track and hunt a tiger, bear or leopard. The Maharaja explains that there is an ideal number of guns for the shoot - six guns. There are two guns for a line and 4 for “stops”. 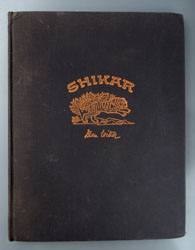 Shikhar, written by Dean Witter in 1961, is an account of the author's travels to India for the sole purpose to go on a hunt. 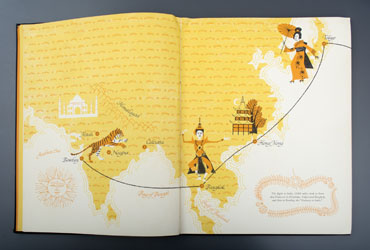 Witter went on a hunt in February 1961 with Allwyn Cooper of Nagpur and his son. The book is written in the style of a diary and he tells us about his guns, the hunting staff that accompanied him, and what he managed to hunt on that day. As the author's aim was to hunt a tiger, each day that he fails to spot a tiger is a disappointment to him.

Witter mentions that the hunting staff consists of drivers, shikaris (hunters), beaters, and blockers. A group of beaters would accompany the hunter and would beat drums to scare away animals from a particular area so they would run in the direction of the hunter making it easier to shoot. Back in the 1960s, the daily wage for a beater was one rupee. 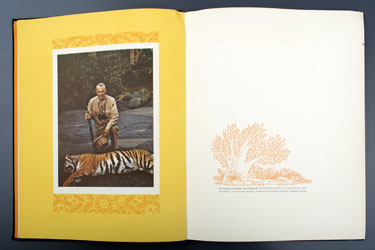 An account of the shikar for each day is recorded by the author for each location - Nagpur, and Kota. He mentions that in order for them to lure an animal out of hiding, they would wait for the animal to kill its prey. Natural kills are exactly what it sounds like - an animal chooses to kill its prey on its own. Whereas man-made kills are baits. A goat or a similar small animal is tied up by people to lure it out in the open so the hunter can get a clear shot.

On one occasion, nearby villages ask the hunter’s son to kill a leopard as it had killed a villagers calf. In this case, the leopard was also hunted for practical and safety reasons.

Dean Witter lists the animals he hunted in Nagpur, including his first Tiger of the hunt, and which gun he used for each one.

The second hunting expedition the author went on was in Kota, Rajasthan with the Maharaja of Kotah and his family where he managed to shoot a second tiger.

Elephant Dance written by Frances Hubbard Flaherty was published in 1937. The author has written the book in the style of letters to her children.

The author was in India to accompany her husband Robert Flaherty who came to cast members for his film. The film was based in Mysore in south India was about a story that Rudyard Kipling wrote called Toomai of the elephants. The story centers around a boy and his elephant. The film was eventually named Elephant Boy. 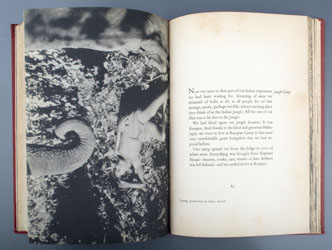 Hubbarty, a Bryn Mawr graduate, writes about her personal experience while in India and the Elephant dance. The book is named Elephant Dance after the dance of the wild elephants in the jungle at night.