Born 1775, James Moffat was a British engraver in India. He arrived in Calcutta in 1789 and trained as an engraver there. He was one of the many 18th century soldiers and travelers from Britain that began sketching detailed landscapes of the country.

The sketches were often panoramic documentations of places. These sketches were then engraved on metal sheets or ivory, and coloured and printed using lithographic techniques. Moffat joined the Calcutta Gazette in 1797 and announced that he was accepting commissions for sketching and engraving scenes.

The Calcutta Gazette announced: ‘Mr J. Moffat most respectfully returns his graceful thanks to those gentlemen of Calcutta etc. who have so liberally patronized his late several publications of views in India, and begs leave to inform them, and the public in general, that he is now engraving a set of plates on a large scale– Views of Calcutta, Berhampore, Monghyr, and Benares,– being all very picturesque pieces, selected from a large collection lately taken, and are particularly illustrated, with a variety of appropriate figures and other Representations. The work will be struck off on the best stout drawing paper, in various coloured copper–plate printing inks.’ 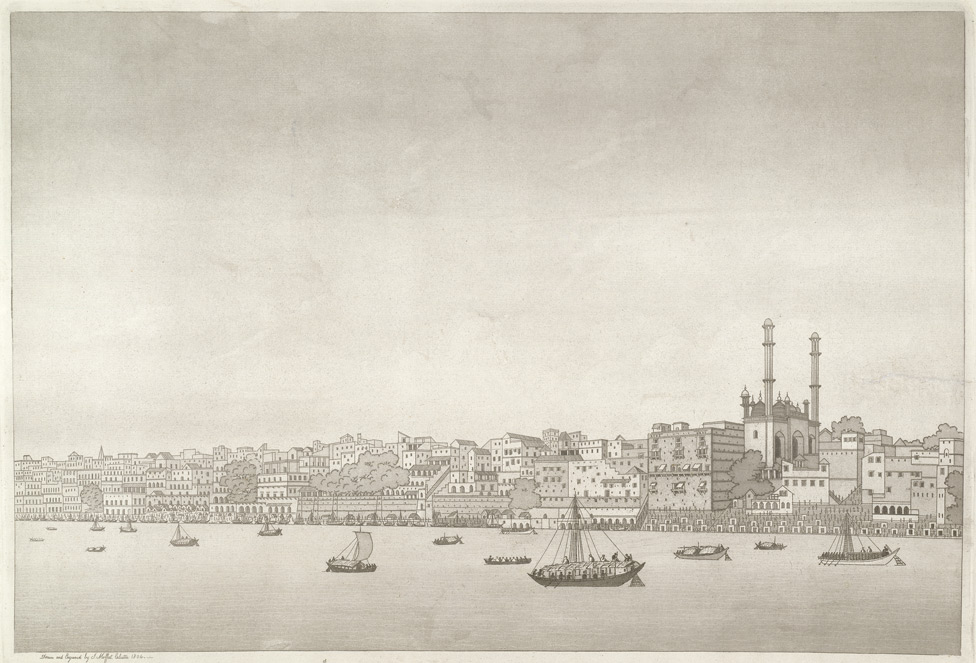 This particular print was drawn and engraved by Moffat and published in the Calcutta Gazette in 1804. Benaras or Varanasi is situated in the west bank of the Ganga river. Varanasi is one of the sacred cities for Hindus. The banks are lined with multiple ghats where residents and pilgrims can come to cleanse themselves with the holy water. The area in the engraving shows the tirtha or the crossing place where people can be the closest to the Gods and Goddesses.