The freedom struggle in India saw a lot of posters made by Indians to unite the masses to oppose the British Raj. These posters or prints were often considered to be seditious material and were confiscated by the British.

However, these were still distributed and stuck in public places by freedom fighters. They were often written in English and Hindi to be relatable to as many people as possible. Posters were an easy way to get certain artists’ work to the public as it was low cost and the printing industry had perfected color lithography and allowed mass production possible. Kanpur ( then called Cawnpore) was a hub for printing presses during 1930 - 1946 and many of the freedom struggle and nationalist themed posters were made there.

Shyam Sunder Lal Agrawal was a well-known publisher in Kanpur and was responsible for many nationalist posters during the 1940s. Most of his posters were confiscated and very few posters remain today.

This chromolithograph from the 1940s features heroes and events from the freedom struggle. It was titled ‘Jai Hind’, which was a slogan used by the Indian National Army as a battle cry and in political speeches against the British Raj. 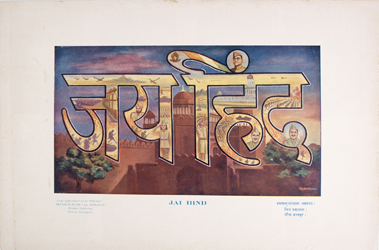 This poster shows Subhas Chandra Bose surrounded by smaller portraits of members of the Indian National Army like Captain Shah Newaz Khan, Captain Prem Sehgal, Captain Gurubaksh Singh Dhillon, and Captain Lakshi Swaminathan as well as the female fighters of the Jhansi Rani regiment. These individuals were key figures in the Red Fort Trials of 1945-1946 that garnered a lot of attention. The revolts and mutinies by the Indian National Army, the lack of cooperation with the British by the Royal Indian Navy and public resentment played an important role in the withdrawal of the British Raj in India. The poster of Sardar Vallabhai Patel is another print published by Shyam Sunder Lal Agarwal. 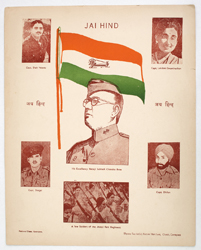 The original work was made by Rup Kishor Kapur; his works were regularly engraved and printed by Shyam Sunder Lal at Kanpur. Patel was the first Deputy Prime Minister of India and was the leader of the Indian National Congress and is considered to be one of the founders of the Republic of India. He contributed to India’s struggle for independence and helped integrate its separate parts into one nation. 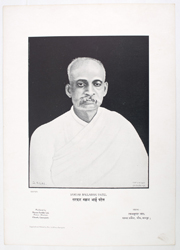