In the quest of identifying the most important new technologies transforming the art world and creative processes - we focus on artificial intelligence (AI) and non-fungible tokens (NFTs) in particular. It is essential to understand how artists are weaving in technology into their practice while various art galleries and museums rewrite the rules of an exhibit. It is further important to analyse and gauge the potential of the blockchain as a suitable ecosystem in commercial art.

Along the same lines, we study artificial intelligence and how it assists the creator in imitating and reproducing an artistic style- more like a tool for the artist and not an entity on its own.

WHAT IS ARTIFICIAL INTELLIGENCE?

Artificial Intelligence is a computer science branch that comprises the development of intelligent computer systems equipped to solve a multitude of problems in any domain or industry. AI includes computer systems that can quickly understand the meaning of human language, learn from experience, and predict, all owing to cutting-edge technologies. These smart machines carry out tasks that typically require human intelligence. Some examples of Artificial Intelligence that we are familiar with today are:

THE RELATIONSHIP BETWEEN ART AND AI

We now come to the question, what does Artificial Intelligence mean for the creative mind? Is AI an opponent of the artist or a collaborator leading to a whole new world of creative possibilities for the same?

The bold 1955 manifesto first announced the field of artificial intelligence, declaring that “an attempt will be made to find how to make machines use language, form abstractions and concepts." [1]

What Happens When Machines Learn to Write Poetry By Dan Rockmore, The New Yorker, January 7, 2020

While AI systems have completely taken over mundane and repetitive tasks performed by humans, we still have had a hold on the more creative and abstract endeavours. However, today when we talk about creativity, our very own creations seem to be challenging us. The later months of 2018 witnessed AI-generated art on the world auction stage of Christie’s, not only as a proof of Artificial Intelligence's creativity but its role as a creator of world class art - another acute AI milestone blurring the line between human and machine. 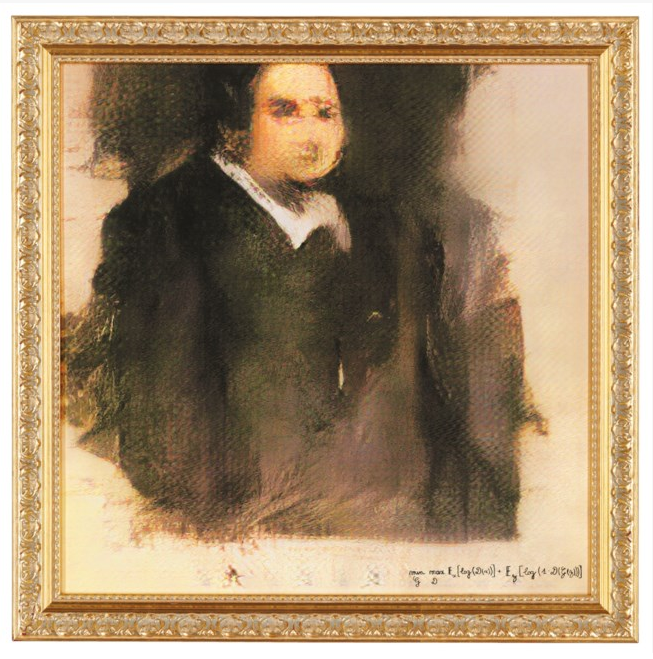 "The painting, if that is the right term, is one of a group of portraits of the fictional Belamy family created by Obvious, a Paris-based collective consisting of Hugo Caselles-Dupré, Pierre Fautrel and Gauthier Vernier. They are engaged in exploring the interface between art and artificial intelligence, and their method goes by the acronym GAN, which stands for ‘generative adversarial network’.

‘The algorithm is composed of two parts,’ says Caselles-Dupré. ‘On one side is the Generator, on the other the Discriminator. We fed the system with a data set of 15,000 portraits painted between the 14th century to the 20th. The Generator makes a new image based on the set, then the Discriminator tries to spot the difference between a human-made image and one created by the Generator. The aim is to fool the Discriminator into thinking that the new images are real-life portraits. Then we have a result.’ [2] "Is artificial intelligence set to become art’s next medium?" 12 December 2018, Christie's

This work by artist Refik Anadol uses enormous data sets, machine intelligence and algorithms; this one in particular being the Deep Learning network of art to create visualisations called data sculptures.

These works however do make one compare AI-induced artworks against the more humane and intricate emotional sensibilities of the artist from which art itself originates. The question hence remains, can AI create art in its authentic sense? And while ever evolving technologies hold the potential of enhancing our capabilities, they still require to be driven by the intention and intelligence of their human masters.

While we are yet to gauge the gaze of traditional art viewers when it comes to AI art on the world stage, for the time being we resort to the very popular saying, "Beauty lies in the eyes of the beholder." Even more so if and when it is not easy to tell AI Art apart from Traditional Art. Yet it still holds true that creativity cannot be limited to a certain set of rules nor can the act of inspiration and ideation be programmed into a machine. Hence it might make more sense to see AI not as a competitor but your future creative partner.