Ebrahim Alkazi and his wife Roshen Padamsee were significantly responsible for promoting many members of the Progressive Artists' Group not only in India but also at an international level. Apart from Alzaki; Mulkraj Anand, Walter Langhammer, Emmanuel Schlesinger, Rudi Von Leyden, and Kekoo Gandhy were also active as collectors.

Alkazi established himself as a theatre director making plays inspired from the West along with being tweaked to have Indian viewpoints. Loving the work of members of the Progressive Artists' Group, Alzaki was friendly to most of them. He invited M.F Husain to design the sets and costumes (for example half masks in Alkazi’s production of T.S Eliot’s Murder in The Cathedral) of his plays to showcase both Greek and Indian realism.

Alzaki was in absolute awe of Gobardhan Ash and decided to express the same in a letter to the master artist himself. Below is the transcript: 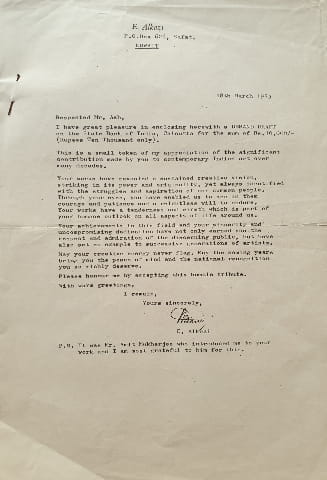 I have great pleasure in enclosing herewith a demand draft on the State Bank of India, Calcutta for the sum of Rs, 10,000. This is a small token of my appreciation of the significant contribution made by you to Contemporary Indian Art over many decades.

Your works have revealed a sustained creative vision, striking in its power and originality, yet always identified with the struggles and aspirations of the common people. Through your eyes, you have enabled us to see in them courage and patience and a relentless will to endure, Your works have a tenderness and warmth which is part of your humane outlook on all aspects of life around us,

Your achievements in this field and sincerity and uncompromising dedication have not only earned you the respect and admiration of the discerning public but have also set an example to successive generations of artists.

May your creative energy never flag. May the coming years bring you the peace of mind and natural recognition you so richly deserve.

Please honour me by accepting this humble tribute.

P.S. : It was Mr. Amit Mukherjee who introduced me to your work and I am most grateful to him for this.