Avatar, also known as a profile picture or user picture in the computing world, refers to a graphical representation of a user or the user's character or persona or possibly physical traits. It may take either a two-dimensional form as an icon in Internet forums and other online communities or a three-dimensional form, as in games or virtual worlds. (Wikipedia)

Avatars tend to reflect some amount of “personality”, “emotion”, “possibly cute” and are generally primitive in an implementation having a sparse use of colours or minimal texturing.

Crypto punks, a collection of ten thousand figures, essentially 'avatars', was released in June 2017 as one of the first non-fungible tokens (NFT) on the Ethereum blockchain. The project was developed by American studio Larva Labs, a two-person team consisting of Canadian software developers Matt Hall and John Watkinson. The experimental project was inspired by the London punk scenes, the cyberpunk movement (a combination of high tech and ‘low-life’). 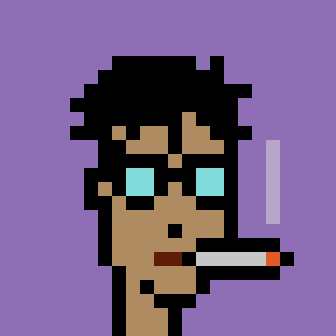 Needless to say, crypto punks are an integral part of the NFT market with each crypto punk having a unique personality as depicted by differing physical features.

Who was Gobardhan Ash?

Gobardhan Ash was a leading member of the Indian Artists Union (the 1930s), Rebel Artist Group (1930s), Society of Modern Art (1940), before being an important member of the Calcutta Artists Group in the 1950s. He was a renegade as can be seen from his art exhibited in the 1950s show.

Gobardhan Ash made some path-breaking experiments. As an artist he was way ahead of his time, his primitive and distorted art was possibly an influence for many that followed from the seminal showing at a joint exhibition held with the Progressive Artists and the Calcutta Group in 1950. His influences can be seen in works of later artists like the progressives and the abstractionists as well.

Ash’s experiments in art from the 1950s are exactly what can be characterized as avatars, that is, ‘primitive’ artworks depicting personality traits. The works are all watercolour on paper (two-dimensional renderings), with vibrant colours making them quite ideal for transformation into an NFT.  As we blend the old with the new, we begin our auction of these ‘avatars’, with one physical artwork, followed by its NFT (a unique edition). We are elated to have re-created an exhibition that happened in the 1950s, that bears semblance to the crypto punks movement, but from seven decades ago.

The Prinseps Gobardhan Ash Avatar auction included 35 rare works on paper from the 1950s and 35 unique edition tokens of the same. We are proud to say that this auction was indeed a successful one with all NFT lots sold out within a span of two hours.