Alongside hosting the first NFT auction (Gobardhan Ash Avatars) in India, we are also proud to announce the first-ever NFT of the iconic M.F. Husain artwork “Lightning”, an initiative by art collector and entrepreneur Kent Charugundla. This move is bound to transform art markets worldwide. The name of this initiative "LightningNFT" is inspired by Husain's historic 60-foot-long mural titled 'Lightning" made in 1975 as a backdrop to an important speech given by Prime Minister Indira Gandhi. 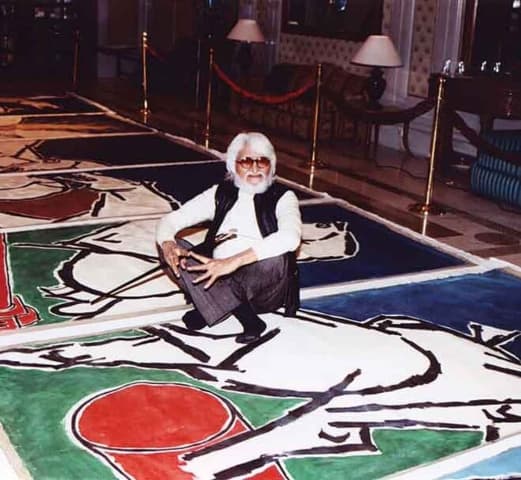 The work comprises twelve grand panels that spell cubism - an art form often associated with Husain. It features wild, white horses charging across a space with visual references to India in the 1970s, whilst capturing the political milieu of the new nation. The LightningNFT drop includes NFTs with 62 unique traits where each NFT depicts 12 panels with its own traits.

M.F. Husain was an Indian modern master widely acclaimed for modernising the Indian art movement and one of the founding members of the Progressive Artists’ Group. His artistic oeuvre surpassed the critical limitations of academic art and public opinion. Husain was known to execute bold, narrative, and vivid paintings that harmonised design and colour in a modified Cubist style. He studied calligraphy before moving to Mumbai where he would paint cinema posters and design toys to sustain himself. Post his humble beginning as a billboard painter, his artistic evolution comprised themes that blended folk, tribal and mythological art. He would portray striking, contemporary art forms. Husain, with bold strokes of his paintbrush, changed the face of contemporary painting in India. He exercised artistic freedom fearlessly, pushing the boundaries of what is tolerable in a culture. He was a craftsman lauded in exile by the artistic fraternity; remembered as an artist and poet of rebellion.

This NFT drop also comes at a time when Prinseps is holding the first NFT auction in India with Gobardhan Ash’s Avatars. Ash’s figures can be compared in today's time to avatars or what one refers to in the digital age as a profile picture, a graphical representation of a user. This auction re-creates the artworks exhibited at the joint exhibition of the Calcutta Group and the Progressive Artists' Group in 1950. 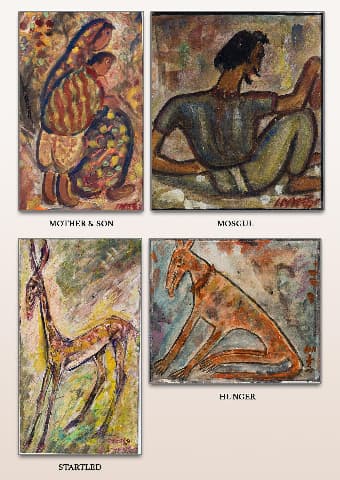 Gobardhan Ash's artworks exhibited at the Joint Exhibition of the Progressive Artists' Group and Calcutta Group, 1950

Gobardhan Ash was a pioneer of modern Indian art who sparked the trend of social realism in India. He was a silent rebel artist, speaking volumes through the revolting spirit of his paintings. His works exposed the grim realities of life such as poverty, hunger, deprivation, and human suffering. He was artistically active during World War 2 and the Bengal Famine and reflected the time and turbulence of the famine in rusty, brown washes. His work with oils, gouache, watercolours reveal the diversity and magnitude of his artistic experiments and his prolific creative mind. Gobardhan’s gouache on board “Mother and son”, “Startled” and “Mosgul” were exhibited in the joint show of the Calcutta Group and the Progressive Artists’ Group in Calcutta, 1950.

We are beyond proud to announce that we’re the first auction house in India to host an NFT auction. As we weave the old with the new, we present to you the Gobardhan Ash Avatars auction. The auction is live for proxy bidding and opens for live bidding on January 14, 2022 7 PM onwards. The original artwork and the NFT of the same will be auctioned in subsequent lots. You can choose to buy just the physical artwork, just the NFT, or both. Auction is currently open for PROXY bidding. Auction commences at 7 pm for LIVE bidding on the 14th of January(Friday) 2022.