Sometime in the middle of December, in 1949, I met Prodosh Dasgupta, Prankrishna Pal, and Rathin Mitra at the Calcutta Photo Society at 157B, Dharamtolla Street. Prodosh happened to be a previous acquaintance. The other two gentlemen, however, I met for the first time. “Why, we’ve been looking for you. There’s something we would like to discuss,” they said.

Following my work at the Photo Society, we picked up the remainder of the conversation at a nearby restaurant over coffee. “You seem to be quite prolific with pen-and-wash sketches,” they said. “We would like to hold a solo exhibition of your works at the Calcutta Group.” 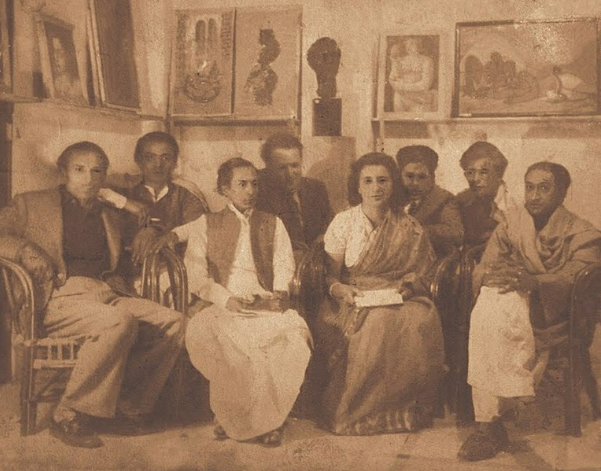 At that time, I had been quite well-known for my use of the pen-and-wash medium. I had bagged the 1st prize at the Madras All-India Fine Arts Exhibition and another prize at the Delhi Fine Arts Exhibition, both in ‘36; and the Calcutta Prize at the Academy of Fine Arts in ‘37. In fact, I happened to be sort of a pioneer in employing this medium. All these points, they claimed, had piqued their interest in organising an exhibition.

Two of their veteran members, Rathin Maitra and Gopal Ghosh, had quit the Calcutta Group. Struggling to fill this sudden void, they’d been searching for a bold and dependable artist when they finally chanced upon me. It was now for them to check out my works. They called on my Begumpore residence that very month, as had been agreed upon. Here, they stumbled upon piles of bright and lively modern art, unique and eclectic, steeped in the new wave art form. This was, of course, besides the pen-and-wash sketches they had expected to see.

“How could you, sir?” they protested. “You’ve been hiding this mountainous cache of works all along!” “It’s hardly surprising,” I grinned. “I’ve been painting and sketching for quite a while now. My room’s stuffed full with these. In fact, I’d be in a stiff were it not for my dear friends, the termites. They’ve already devoured some fifty paintings.” “Are you serious?” “Absolutely.”

The three gentlemen sifted through my stockpile with much industry, and finally narrowed down on 56 paintings for the proposed exhibition. I was to prepare these for the event by sticking boards and so on. The Group would look after the rest. I agreed to the proposal. The exhibition was finally held on January 5, 1950 at 1, Chowringhee Terrace, Gokhale Road, Calcutta, and was curated by Prodosh Dasgupta. It was a grand success!

A few other exhibitions had been running in town around that time, not to mention the annual exhibition of the Academy of Fine Arts. The Statesman, dated Friday January 6, 1950 featured my works.Praise and appreciation for this novel enterprise was also echoed in the nation and several Bengali newspapers and magazines. When Prodosh Dasgupta, Prankrishna Pal, and Rathin Mitra had visited me on behalf of the Calcutta Group, they told me:

“All you have to do is paint and sketch, and keep at it. The exhibitions and the rest are up to us.”

Later on Wednesday, April 12, 1950, the Calcutta Group and Bombay Progressive Group Combined Exhibition was held at old No. 1, Chowringhee Terrace, (Gokhale Road) Calcutta. Works from 15 artists were compiled and put on show.

Mosgul by Gobardhan Ash, 1950, Gouache on Board

On Thursday, April 13, 1950, the Statesman published a critical overview of the works.  Besides this, various other newspapers and magazines in both Bengali and English congratulated the Calcutta Group on their efforts. Once again in ‘53, some of my works were displayed at a combined exhibition by the Group in Delhi. That’s about as far as my journey with the Calcutta Group goes. Shortly after my joining them, two more artists, Hemanta Mishra and Sunil Madhav Sen jumped onto the bandwagon.

Prodosh Dasgupta & co. egged me on to keep drawing and painting. “We’re here for you,” they proclaimed. “The Calcutta Group is with you for organising more exhibitions.” I hardly needed this reminder, for I’ve been painting tirelessly for years now, all along my career as an artist.

I’ve never cared as much for appreciation. Paintings and drawings flowed seamlessly from my paintbrush. Moreover, I’d never stick to the ‘mottos’ set by the Group as far as painting went. This was quite unlike the other members. My art had developed long before I chanced to veer into this company. I must admit though that meeting Prodosh Dasgupta, Prankrishna Pal, and Rathin Mitra paved the road for two solo exhibitions, which I will forever remain grateful for.