Bimal Dasgupta (1917 – 1995) was one of the front runners of water colour traditions in Indian art during the second half of the twentieth century. His experiments with the conventions of the medium expanded the possibilities of painting methods, beyond the components of academic realism that was instructed in art schools.

Dasgupta joined the Government College of Art and Craft in 1937, though his training was temporarily paused as the World War II expanded with the second Sino-Japanese war, impacting Asia. He was called to join the Victory Magazine’s office as an assistant director, in charge of the artworks of the magazine. However, he finished his diploma from the college in 1943. Bimal Dasgupta then moved to Delhi and joined the Dhoomimal Art Gallery, which is also considered as India’s oldest private gallery. In 1963, he joined the Delhi College of Art as a faculty and was associated with the institution for fourteen years. 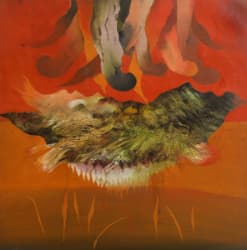 Dasgupta’s repertoire of work explores mediums like oil and acrylic as well. He has been quoted expressing, "I believe that if an artist has mastered one medium, he can work in the others as well. I paint only when I am in the mood. The colours are always there in my heart, an unseen power in the background drives me to put them down on canvas." However, his demonstrative engagement with watercolour as a medium was initially a financial choice as it was comparatively more affordable than other mediums. Soon he began to experiment with the formal aspects of the medium and of the subject, liberating the classical representations of water colour, established in India.

Dasgupta was essentially a landscape painter but his constant engagement with the subject gradually allowed him to explore certain spiritual tendencies of abstraction and eventually immersed himself in pushing the boundaries of surrealist proclivity. His works are celebrated for its intriguing scope of layers and textures captured in the mystic but cerebral representation of the elements above the horizon or of life under water.

The artist’s vast body of work underline his interest in forms, space, colour, surface and void inspired by nature rather than anthropomorphic elements. Human conditions are rarely witnessed in Dasgupta’s painting. Nevertheless, his appetite for diversity produced works in oil paint and acrylic, adding more flesh and body to his imagery. Regrettably, it was soon discovered that he was allergic to turpentine and therefore had to withdraw from using oil paint any further. The painting presented here is therefore from an exclusive inventory of the artist’s work that is rarely viewed. 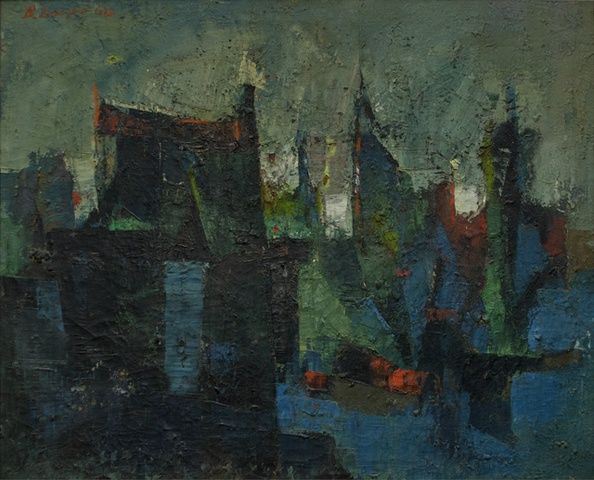 Bimal Dasgupta’s unique career as a landscape artist brought him recognition from beyond the boundaries of his country. His works traveled to Sao Paulo Biennale in 1965, 1970 Expo at MOMA Tokyo, Contemporary Indian Art at Frankfurt, Festival of India at Paris and Moscow in 1985-86. Dasgupta was also commissioned for doing murals at the Indian pavilion of the International Trade Fairs in Moscow and Tokyo.

Apart from being widely exhibited in India, the artist was also associated with the Calcutta Painter’s group engaging with Ganesh Pyne, Jogen Chowdhury, Prokash Karmakar to name a few, in the early eighties. Bimal Dasgupta was honoured with the title of Kala Ratna by All India Fine Arts and Crafts Society (AIFACS) in 1988 and the following year, he was made a Fellow at The Lalit Kala Akademi, New Delhi.