Sculptures are increasingly becoming popular investment grade collectables. In some modern South Asian art auctions at the end of 2018 Sadanand Bakre, Prodosh Dasgupta and Adi Davierwala sculptures were sold for record-breaking prices. To appreciate modern sculpture it is important to understand the origins of classical Indian sculpture. 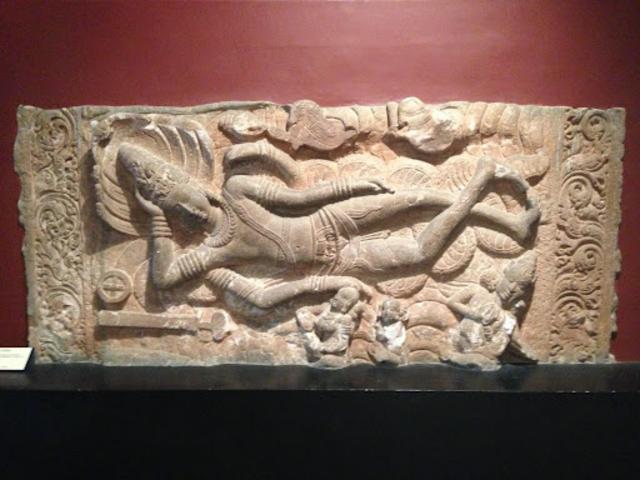 When the universe dissolved into the primordial waters at the end of the age, the blessed lord Visnu, having stretched out (his serpent) Sesa (as a couch), entered into (abhajat) Yoganidra (i.e. entered into the sleep of yoga). Then two terrible Asuras named Madhu and Kaitabha arose from the dirt in Visnu's ear (and) set out to slay Brahma. Brahma Prajapati dwelt in the lotus in Vishnu's navel, and having seen the two fierce Asuras and the sleeping Visnu, with single pointed concentration, for the sake of awakening Visnu, he praised Yoganidra, who had made her abode in the eyes of Visnu. [1] Encountering The Goddess, Pg. 36.

This excerpt from Encountering the Goddess-A Translation of the Devi Mahatmya aptly elaborates the mythical story of the narrative represented in the ceiling slab from Mumbai’s Chhatrapati Shivaji Maharaj Vastu Sangrahalaya’s Sculpture Gallery.It is a 7th century CE pink sandstone Sheshashayi Vishnu sculpture of the Huchchappayyagudi Gudi Temple in Aihole, Bagalkot District, Karnataka. This essay analyses the formal and visual aspects of this sculpture, excavating the evolutionary history of its representation. These elements are discussed through the iconographical lens of Dr. Nanditha Krishna’s Art and Iconography of Vishnu Narayana, Alice Boner’s Principles of Composition in Hindu Sculpture, and Heinrich Zimmer’s Myths and Symbols in Indian Art and Civilization.

Dr. Nanditha Krishna shows us that, “Shayanamurtis are rare in the North and East of India, though not so in the South where they are given tremendous importance and are, generally, the main images in Vaishanava shrines." [2] Nanditha Krishna, Pg. 102. Thus, the artistic interpretation of the Sheshashayi form of Vishnu is a later development in Vaishnava shrines and became of high importance in regions of South India as compared to North and East India, as Vishnu became the supreme deity. Before such Shayanamurtis or the reclining form of Vishnu came into being, Vishnu was generally depicted as Sthanakamurtis-in standing posture popularly in Samabhanga, or depicted as Asanamurtis-in seated posture.

As one walks around the CSMVS sculpture gallery another similar ceiling slab from the same temple in Aihole with Uma Maheshwarmurti is seen. This is evident as they both share the same decorative patterns as seen in pictures below on either side of each slab and are approximately the same size and made from the same materials. Therefore we can imply that this Sheshashayi Vishnu sculpture was not part of the garbagriha or the central sanctorum of the Aihole temple and was one of the many ceiling panels in the temple. Its perspectival visual imagery is clearly perceivable from a bird's-eye view looking at it above, as if from below. 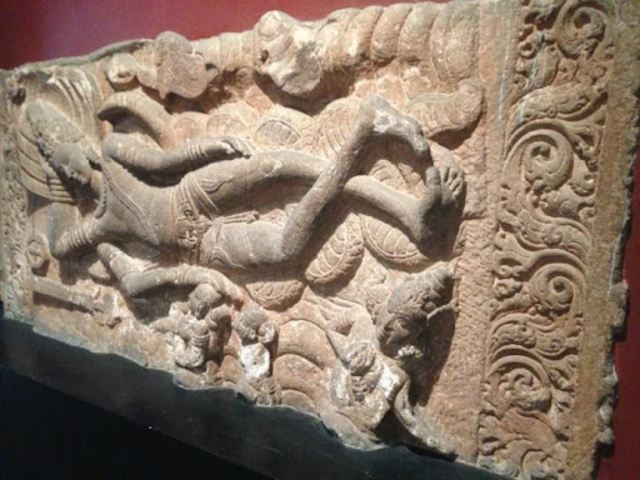 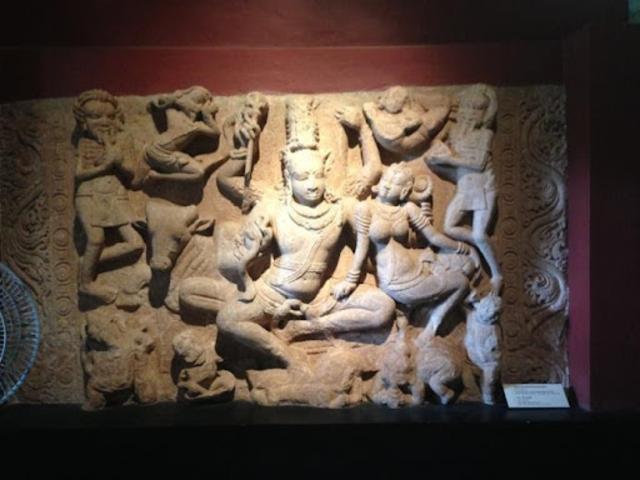 Size proportions play a vital role representing Vishnu as the supreme deity. Vishnu forms the central element of the panel with the asuras Madhu and Kaitabha subordinate to him. Goddess Lakshmi stands with her hands folded in deep devotion beneath Vishnu's feet. Lakshmi signifies prosperity as Vishnu's Shakti. Lakshmi is generally represented as a shrivatsa symbol on Vishnu's chest. Above Vishnu are two apsara-like figures looking like masses of clouds joyfully sailing through the air. As Dr. Krishna points out, “While the North Indian icons of Narayana were four armed from the beginning at Udaygiri, those of the South were two-armed till as late as the 8th century AD.” [3] Nanditha Krishna, Pg. 105.

Thus we observe that Vishnu has four hands representing the four directions, as compared to being two-armed. This would perhaps mark the beginning of representing Vishnu as four-armed in the Southern region.

Generally Vishnu's attributes comprise the shankha or conch, chankra or wheel, and gada or mace that are held in his hands but here in this particular Aihole ceiling slab they float in the milky primordial ocean as Vishnu is in deep slumber for the four months of chaturmas or monsoon season. The fourth attribute of a lotus is missing in this sculpture. According to Dr. Krishna: “While the North Indian images of Narayana included Brahma rising from the lotus, the creator, he did not appear in Southern iconography till nearly the 8th century.” [4] Nanditha Krishna, Pg. 105. Thus we observe that this popular symbol of Brahma or the God of creation in seated posture on a lotus, rising out of Vishnu's navel is absent in this particular sculpture from the Southern region. 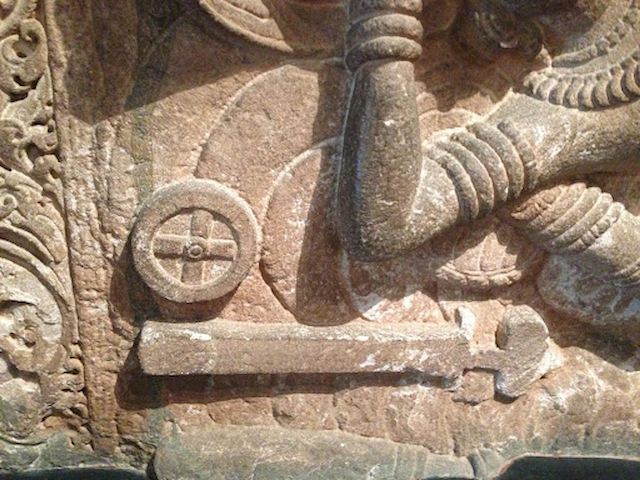 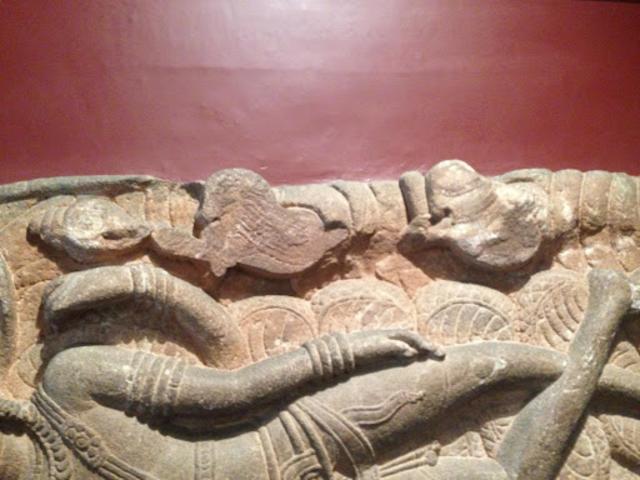 Vishnu lies on Adisesa or Ananta-the endless. Adisesa is a serpent with a thousand heads on which Vishnu supports the Earth. Adisesa’s body and hood are represented as forming a bed for Vishnu to lie on. The canopy above Vishnu’s head protects him when he lies asleep during the interval between creations. In the Aihole sculpture we observe the Naga or serpent in Chalukyan form. Dr. Krishna remarks that from the 5th to the 6th century BC onwards, "The simple undulations of the Naga are developed into regular curled coils." [5]  Nanditha Krishna, Pg. 81.The evolution of the Naga form is thus seen through the number of hoods or the shape of its coils, which in this case are semi-curved and coiled.

The material used is pink sandstone, which is a uniform textured and evenly grained rock usually cream to pale pink in colour. The sculptor achieves his desired shape by light chisel strokes or by gradual carving with a flat knife. This helps the sculptor to give shape to the naturalistic curves of Vishnu's rounded cheeks and his elegant body form. Vishnu’s legs are uniquely crossed-specific to Aihole Chalukyan sculptural traditions. A thin loincloth wraps around him along with a bejeweled mukut or crown specific to the Chakravartins or kings.

The composition of the 8th century AD Ellora plaque is almost a regular square where the madhya sutra and madhya prastha or vertical and horizontal gridlines intersect to create four equal organic parts. The figures around Vishnu in the Ellora sculpture guard his sleep and they surround him from all four sides equally, creating a middle space for profound timeless peace as compared to the uneven symmetry seen in the Aihole sculpture. In response to the Vishnu on Adisesa from Ellora Cave, Alice Boner spots that: “The simplicity in the outlay of this composition gives a feeling of repose and peace. The dominating horizontal is the expression of perfect quiescence.  There is no friction, stress or tension anywhere.” [6] Alice Boner's response to Visnu on Adisesa, Ellora Cave, 8th century AD, Pg. 144.

On the other hand, when we analyse the 7th century AD Mahabalipuram Vishnu sculpture, Boner discusses the element of tension in its composition where the madhya sutra and madhya prastha intersect to form an uneven composition, which is not in equal halves. She notes:

But quite unlike the Ellora panel of the same subject, which breathes perfect harmony and peace, the present composition is filled with great inner tension, brought about by the sharp and abrupt juxtaposition of two antagonistic form-complexes: one is the long unbroken horizontal extension of the Sesanaga's body with the recumbent figure of Visnu, and the other the tense and compact vertical mass of the Danavas. [7]

Similarly, if we look at the sculpture from Aihole, there is an essence of drama through the clash of the horizontal mass of Vishnu and the compact vertical mass of the Asuras, juxtaposed by Vishnu’s peaceful and elegant poise. This duality in composition can be related to Vishnu's mythical Maya that Heinrich Zimmer elaborates upon:

The secret of Maya is this identity of opposites. Maya is a simultaneous and successive manifestation of energies that are at variance with each other, processes contradicting and annihilating each other; creation and destruction, evolution and dissolution, the dream idyll of the inward vision of the God and the desolate naught, the terror of the void, the dread infinite. [8] Zimmer, Pg. 46.

To conclude, this dichotomy in Vishnu’s intrinsic expression of contentedness versus the outside worldly drama can thus become a symbol of the eternal struggle between light and
darkness, between the forces of creation and destruction, which simultaneously and in alternation work towards the everlasting transmutation of life; making this Aihole ceiling slab unique in it’s aesthetic attributes, iconography and metaphysical interpretation.