Born in 1910 in Indore, N. S. Bendre trained at the State Art School in Indore in 1929. Bendre’s early works can be described as Impressionist and academic in style. He is well known for founding the Baroda Group of artists in 1956 as well as founding the Lalit Kala Akademi in Delhi.

The style that he mastered came with a keen sensitivity to his surroundings, and yet, it was always supplemented by the signature nuance of his thought.

“Those familiar with the work of Prof. N.S.Bendre will find much to surprise them at their one-man show which opened at the Jehangir Art Gallery on Friday. He is almost entirely preoccupied with non representational painting and out of the 29 exhibits only three are executed in his familiar style.”

“Such a radical development in the work of one of the country’s leading painters deserves and justifies serious study and assessment” (Hindustan Times, 22nd November, 1959) 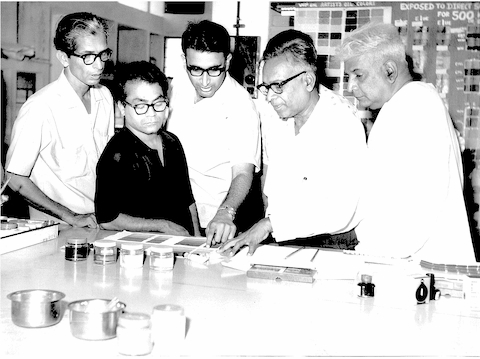 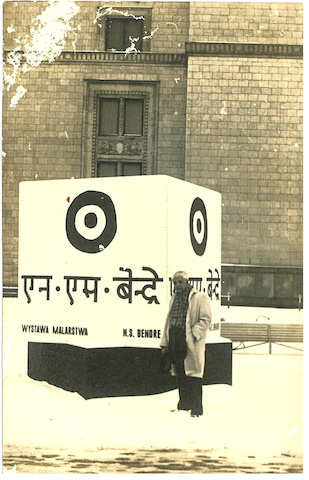 Bendre’s oeuvre had a lot of yellows and mustard ; perhaps he was inspired by the autumnal colours that he saw during his many travels abroad or possibly the tulips in Kashmir. The subject matter in his works were often pushed into the background and a certain emphasis was put on the rejection of the representational shapes.

In Summer Forest, we can see an example of his early pointillist work. Pointillism is often considered to be a western invention or concept, however it is amply found in Indian art history. Ivory drawings, for example, are also a version of pointillism as it consists entirely of clusters of dots to create depth and shadow. In addition to that, Bendre was also influenced by calligraphy. In the 1950s, he went to China and purchased a variety of chinese papers, inks, and brushes for a different effect. The subject matter in this work is flora, branches and flowers, that are subtly merging into the background.

“On his return to Kashmir from Bombay, he recognized an increasing restlessness in himself; he felt cut off from the mainstream of the national art movement. He was conscious that Kashmir had contributed a good deal to the evolution of his outlook and skill. Its scenic grandeur had given him the incentive to master the technique of rapid sketching, to record the changing moods of a landscape. He perfected the handling of gouache particularly on tinted or crocodile surface paper. He also recognised the varying overtones of atmospheric hues, which changed with the season. Another important realisation was that, while painting on the spot, the immediate impact of the scene was far too overpowering to allow any interpretation of colour.” (Bendre: The Painter and the Person, Ram Chatterji, The Bendre Foundation for Art and Culture & Indus Corporation, Pg 22) 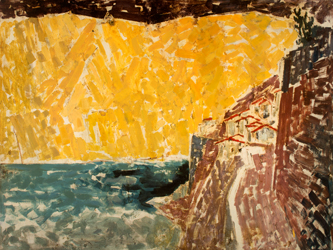 Vivid yellows and large expanses possibly reminding one of Akbar Padamsee’s later metascapes. Bendre spent some time working in Srinagar. His work took him to numerous sites such as the Amarnath caves and Sonmarg amongst other places. The landscape surely refers to such a hilly riverside terrain.