Born in 1921 in Chittagong, undivided India, Somnath Hore studied at the Government Art College in Calcutta. His works represent the turbulent lives at the time of the Bengal Famine of 1943. His pictorial language in his sketches, sculptures,  prints is a reaction to one of the major crises that hit Bengal in the 20th century.

Somnath Hore’s art practice was western and academic in style. He was interested in humanist themes, and his works often involved the world of painting and printmaking with sculptural, textural prints that resonated with his feelings of anger and pain. His subject matter drew attention to the life of people in Bengal; the impoverished and suffering social class represented the pain caused the Famine of 1943. The subject matter was used to arouse patriotic when the used their scorched earth policy during World War II. 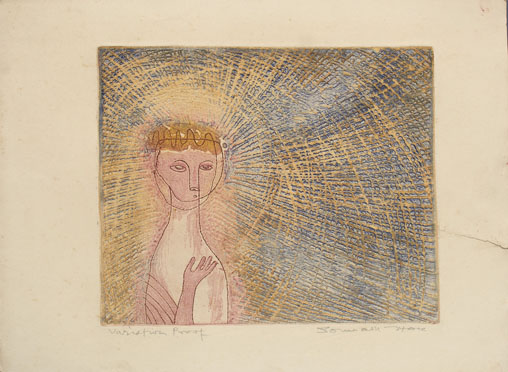 In 1958, Somnath Hore moved to Delhi to join the Delhi Polytechnic. He experimented and different methods of printmaking such as wood engraving, etching, lithograph, and to negotiate with his political image-making. His prints started gaining attention and prominence across the country and referred by his contemporaries in the cultural field. At the peak of his artistic progress, Somnath Hore left Delhi and moved back to Calcutta. 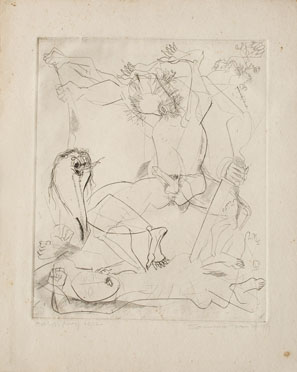 In 1969, he moved to Santiniketan and joined the Printmaking Department at Kala Bhavan. It was this time that Calcutta was going through  and social upheaval and Hore was disturbed by the conflict. His works gradually became more cerebral and his subjects more universally emotive. It is here in Santiniketan, that Somnath Hore developed his pulp print technique with the Wound series. The meditative white on the  surface texture of cuts and peels, of skinned and bruised, intensified the core expression of pain and suffering which he advocated throughout his life. The icon represented the helpless, deserted, starved, and tortured people that he saw during the communal riots and Bengal famine.