"Man's history is waiting in patience for the triumph of the insulted man,Triumph he had, but at a terrible price. With the subcontinent at war, and the new-born land still wracked by bone-shattering poverty, the joy in Bangladesh was necessarily tempered by sorrow.” - Rabindranath Tagore)

''Lean, light of foot, bright-eyed, Somnath can be seen around the Santiniketan campus, but always in a hurry. He is always going somewhere like a man on a mission. And his work too has a missionary focus.''

''On a summer morning the world glows with sunlight, the flowers load the trees, the breeze wafts around a heady kind of perfume but in Somnath’s vision it is the spectacle of man’s suffering that steals the show. In his paintings and sculptures, in prints and drawings it is invariably the same.''

''This has been so since a long time. Since he saw the disastrous Bengal famine more than forty years ago; and behind it the panorama of rural poverty when still a youth. He goes over and over this obsessively. In everything he sees he reads its gesture of tragedy.'' - The Vision of Somnath Hore, K.G.Subramanyan, April 1986

“A new awareness was created in me. In 1969–71 society was in a state of upheaval and chaos. A section of the youth was restless; there was panic and terror amongst the common people. Wounds is what I saw everywhere around me. A scarred tree, a road gouged by a truck tyre, a man knifed for no visible or rational reason. A new concept was born. The subject was eliminated, only wounds remained.” - Tate Modern , Somnath Hore Exhibition

At play in Hore's ‘Wounds’ is a new abstract visual language used to register trauma, but one that is open to multiple interpretations and meanings. - Indian Art and the Bangladesh War, Devika Singh

The making of white on white prints involved producing gashed and blistered surfaces on clay or wax plates and making their moulds in cement which became the matrices for the prints. The medium and process point towards a common ground between print-making and sculpture. He initially worked on clay but his later prints were using wax plates which he found more suitable. And it by tearing, folding and joining similar wax plates his first sculptures were made. - R. Siva Kumar

Prinseps is pleased to present an important work from the "Wounds" series of Somnath Hore - his language of abstraction is historically important due to the Bangladesh war. 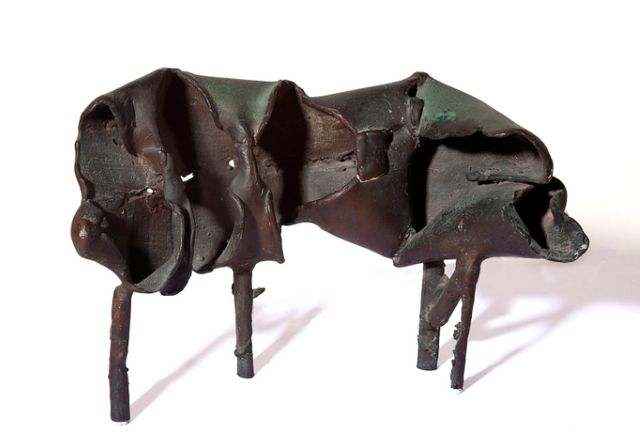