Years ago, artists from various walks of life gravitated towards a creative anomaly near Mumbai's Opera House. The Weavers' Service Centre was established in the 1950s by Pupul Jayakar. Masters such as Prabhakar Barwe, Anand Mohan Naik, Gautam Waghela, Ramesh Vaghela, and Gopal Adivrekar designed textiles at the center for years to support themselves while exploring their identities as artists.

Even as we may wonder if creative minds could imbibe new skills and technologies without diminishing their primal creative grounds, artists such as Barwe, Naik, Adivrekar, and Waghela found their calling. These artists saw their practice as separate from their job. Evenings after work at the Weavers would comprise conversations about current art exhibitions and fairs in the city. Barwe's works would often fuel these conversations. This closely-knit community aimed to help each other gain financial independence to sustain their artistic practice. Often they would visit each member's house to study and discuss their artworks. These artists were each other's closest friends, critics, and supporters.

Prabhakar Barwe was a self-effacing artist who extensively explored the relationship between space and form. Barwe's association with the Weavers' Service Centre began early in Varanasi, as he delved into the tantric-oriented abstract format of his paintings. Here, he worked with notable painters such as Gautam Waghela, K.G. Subramanyan, Ambadas, and weavers on modern Indian textile designs. Born in 1936 in Maharashtra to a family of artists, Barwe was 12 years old when he moved to Mumbai with his parents. He honed his skills at Sir JJ School of Art. After receiving his diploma in 1959, Barwe worked with the Weavers Service Centre in Mumbai for over 20 years, designing textiles.

The Centre was an occupation and a mode of sustenance for the artist. He consequently enhanced his understanding of forms while creating new designs for the weavers.

He nurtured a daily habit of writing his thoughts in a diary before leaving his office and heading to his snug studio in Gamdevi. He would spend his evenings after work painting in his tiny apartment where he relentlessly experimented with objects, forms, and space. 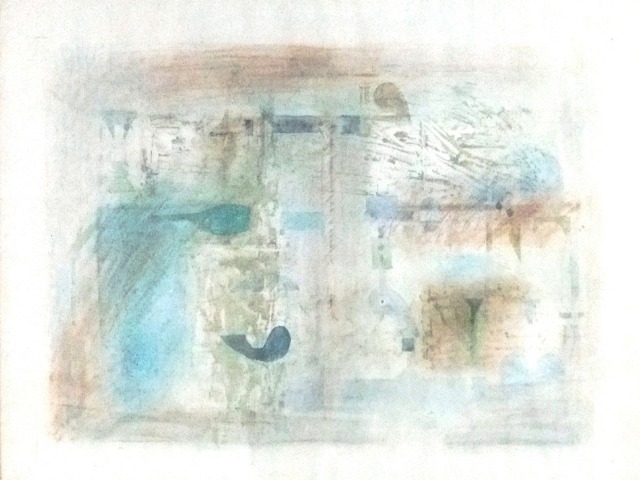 The Laboratory, Watercolor on Paper

Barwe was an artist content in solitude. A dedicated painter, he spent hours painting within the four walls of his tiny studio, only stopping for the bare necessities- bread, an evening walk, and a shower. He would breathe life into mundane pieces, gifting each shape its own right to actuality. And while he was known as a symbolic abstractionist, he did not conform to the mainstream notions of modernism and abstractionism. He carved a niche for himself in a ubiquitous, abstract optical language that studied inward spaces and shifting realities.

Anand Mohan Naik is an unassuming artist whose early works paved the way to abstraction in India. An artist of Goan descent, Naik graduated from Kalabhavan Shantiniketan in 1960. Naik was also closely associated with one of the doyens of Indian Art- Francis Newton Souza who was also a Goan artist and founding member of the Progressive Artists' Group. Naik was one of the three people in the art arena to attend Souza's funeral. 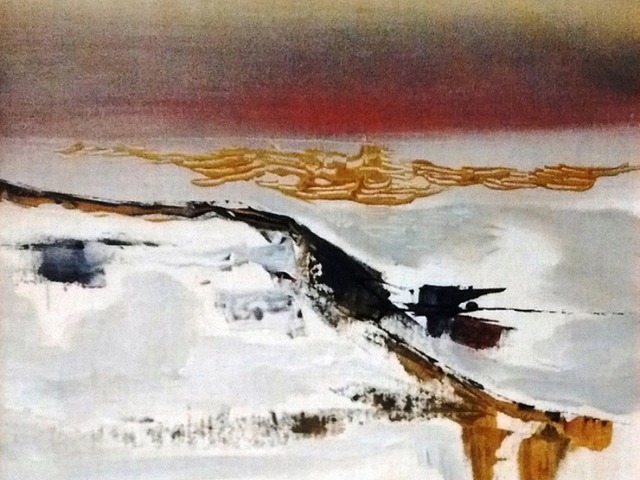 The versatile artist spent most of his life in Bombay. He worked with Prabhakar Barwe at the Weavers' Service Centre and hosted gatherings at his Bandra residence in the evenings with like-minded artists such as Prabhakar Barwe, Gautam Waghela, and Gopal Adivrekar. Naik is known as the master of many mediums. He worked with paper mâché sculptures painted with enamel oils and watercolors. Naik is also one of the very few artists to have expertise over a rare medium like “old egg tempera.”

However, Anand Mohan Naik remains to be one of the most underrated artists with extraordinary qualities.

Gopal S. Adivrekar was an unconventional abstract painter who set a new benchmark for the art of non-figurative painting. Born in 1938 in a Konkan village in Maharashtra, Adivrekar honed his skills at Sir JJ School of Art. After completing his graduation in 1963, Adivrekar worked as an art designer at the Weavers' Service Centre for over two decades while pursuing a distinguished career as an abstract painter. He was also appointed Chairman of the Bombay Art Society. He was both an artist and organizer in the art arena.

Adivrekar's paintings are indelible creations of colors and abstract forms. Shades and tints reminiscent of Adivrekar's coastal hometown in Maharashtra often colored his canvases. He used the blue of the sea, green of the trees, the glistening golden sands, the white of the turf and clouds and presented them as striking abstractions. 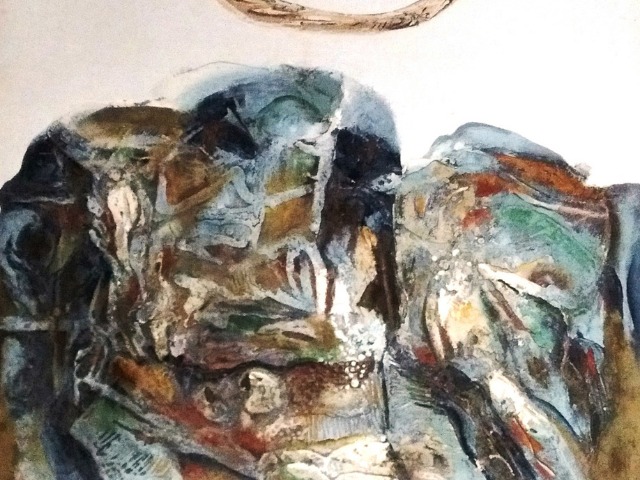 This particular work is a mixed media on canvas with a fascinating melding of hues and powerful imagery. Today, we fondly remember Gopal S. Adivrekar as the colorist of inimitable artistry.

Gautam Waghela is an avant-garde artist whose work intricately explores human values in a historical and cultural context. Born in 1936, Vaghela received his early art education from the famed Sir JJ School of Art. After graduating from JJ, he studied Mural and Fresco techniques in Rajasthan. Vaghela was associated with the Weavers' Service Centre from 1962 to 1994, where he would document Indian cloth to create a cohesive record of weaves and textiles across the country. The Centre was also where he interacted with his contemporaries like Prabhakar Barwe, K.G. Subramanyan, and Ambadas Khobragade. Waghela's paintings stir conversations around the past, memory, and imagination. His work reveals his intense fascination with human existence and Indian culture. 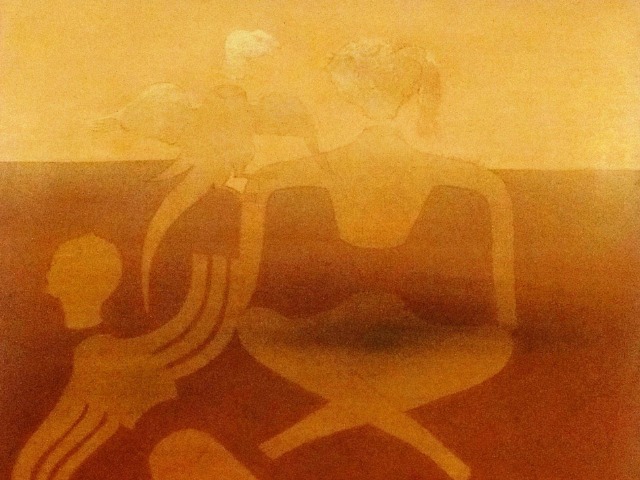 This particular work is an oil on canvas with the dominance of a single tone. Vaghela's learned, analytical yet creative representation of Indian culture stemming from the transparent veils of time won him the Padma Shri in 1982. He has also illustrated books such as The Story of Dance: Bharata Natyam by Krishna Sahai and Another India: An Anthology of Indian Contemporary Fiction and Poetry with British painter Howard Hodgkin.

Ramesh Vaghela is an Indian artist born in 1960. He studied art and received his post-diploma in painting from the Maharaja Sayajirao University of Baroda in 1985. After settling in Bombay, he worked at the Weavers' Service Centre for a couple of years. He was a late addition to the artistic community at the Centre.

The following work is an oil on canvas with hues of muted colors and a morphed nameless face amidst two stone-like structures. Vaghela plays with abstraction and faces on geometric sculptures set amidst a social construct. 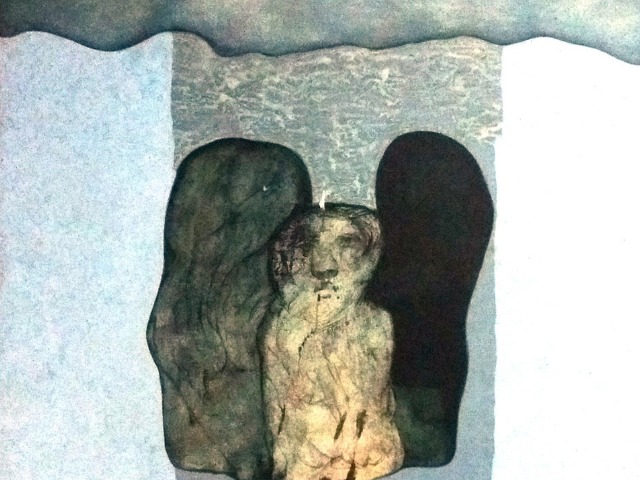 Visit the center today, and a quiet corridor leads you to the Dyeing & Printing, Weaving, and Design sections. Make your way to the foyer, and you see a display of vivid photographs from the center's creations. Vibrant scarves, bright sari pallus and tapestries, shawls, and rumaals all still lovingly woven here, providing a drastic contrast against the nondescript surroundings. Today we wonder about the role of such establishments in artistic discovery. Do these centers provide a sense of security, are they a mere occupation or simply a burden for the artists? What we do know from the past is that the Weavers' Service Centre was not just a space for contemporary artists to work with traditional weavers, but a pillar and enabler of artistic sustenance, growth, and independence. And we are certain it serves the same purpose even today.