The design elements chosen for Prinseps rely heavily on the genesis of its name. The design is heavily inspired by antiquities and by the Brahmi script.

James Prinsep (one of the inspirations for our name) played a pivotal role in deciphering the Brahmi script, found carved in stones across India and Sri Lanka. Mr. Prinsep's role was also instrumental in identifying the Ashokan edicts. It is only natural that we rely on Brahmi as a source of inspiration. 'Prinseps' written in Brahmi would thus look:

Our icon uses the two Brahmi 'P's, one inverted, creating a symbol of trust and mutual guidance.

And similarly to the footer.

The colour schemes for Prinseps were heavily inspired by those seen in antiquities! The archeological and historical component adds a strong personality to the brand and can be used as a theme within the Prinseps Identity, e.g., the Ashoka Pillar shown below: 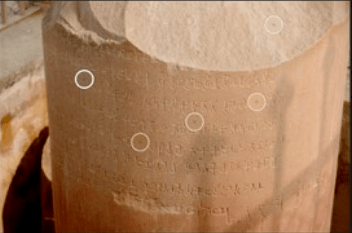 Various colours have been extracted from the pillar and will be used as secondary colours throughout the brand.

Any brand with a strong identity will always feature graphic elements within the digital and print material. This is implemented at the designer's discretion.

Very little usage of the Brahmi letters/symbols as graphic elements throughout the digital/print communication to make the brand recognisable and stand out without imposing too much. For this reason the logo is visually simple as it will be accompanied by these elements and can also stand on it ́s own.

The fonts chosen are Google Font’s Montserrat Light (Sans-Serif) and FreightDisp Pro (Serif). The mixture of both a Serif font and a Sans-Serif font gives a luxurious feel, yet modern. Moreover, the Sans-Serif font is more legible on digital screens and mobile phones.