Subramanyan’s artistic oeuvre reflects the modernism in post-independence India, that was devised to accommodate the varied Indian artistic aesthetics and history as a continuation of cultural pursuits.

His engagement with the traditional forms and materials, rooted in the country’s psyche, steered a liberated generation of artists, in reconfiguring a more cohesive identity of Indian modernism.

Through his work, the modern Indian art scene witnessed exploration of mediums in painting, printmaking sculpture,  design techniques; terracotta, glass and painted murals; mixed media masks, toys, and so on, which underlines his integrity and respect towards indigenous spontaneity in art-making. 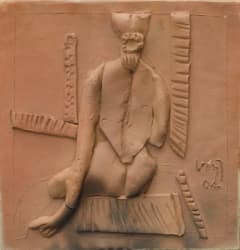 “An enlightened eclecticism, believes, is the appropriate mode for creativity in a plural world, and only an advantageous eclecticism can keep the plural. His own work done in a number of different mediums, with its many layers of subversive play, wit and irony is an exemplary demonstration of this. The position that spells out lucidly is one that many Indian artists in the 1970s and 1980s found valid. During this period, Indian artists, by and large, felt the need of giving up the idea of monolithic Western modernism and began to think in terms of modernisms existing simultaneously and guided not by a single formalist model or ideology but by different cultural determinants. The quest for  in which history and art traditions found a place took them beyond Western modernism while exploring their affinities. This helped to do away with the injunctions against narration, literary inspiration, and various other modernist purist taboos and made the Indian art scene more varied than it was before.” - R. Siva Kumar. “Modern Indian Art: A Brief Overview.” Art Journal, vol. 58, 1999

After pursuing Honours in Economics from Presidency College, Chennai, joined Kala Bhavana in 1944. Here he came in contact with Nandalal Bose, Benodebehari Mukherjee,  Rankinkar Baij. Much later in his essay, The Big and The Small, writes, “What Nandalal and Rabindranath wanted to in Kala Bhavana was a creative community, not just a professional school. Professional schools are end oriented but these ends are generally small. This is not to understand their importance. Most of the works of art that we see and admire in the museums are made by people trained in a professional school or guild. But these were part of a tradition, a widespread network of concepts and practices which upheld a comprehensive worldview that was shared by the generality of people. But this unity of outlook does not anymore survive in the modern world. What we see here is a maelstrom of cultures;”. Subramanyan’s quest to formulate an interconnected voice of art  single-handedly produced a body of work that defends the self-reliant understanding of modernity in Indian art practice. 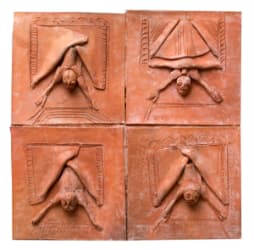 In 1951, K.G. Subramanyan joined the Faculty of Fine Art in M.S. University, Baroda as a lecturer. It was here that he delved the pedagogue in him.  His devoted involvement with the students, the curriculum of the institution enabled him to advocate the art education methods that were more relevant to the changing demands of the nature of modernity in India, which was essentially built from his tutelage in Santiniketan. Geeta Kapur very accurately observes, in When was Modernism, “With this lineage (Santiniketan school) finds its most articulate expression. If earlier Bengal artists took their cue from the avid eclecticism of popular Bengali culture as it developed from the nineteenth century,  to privilege this eclecticism of ideas and forms in terms of the theory and practice of art. He demonstrated how the hierarchical range of an art tradition is significant precisely in the way the chain can be playfully interlinked and continually transformed. Forms which are discretely categorized can be synthesized almost unaccountably in the perception and hands of the artist so that if you pick up one pictorial element – one sign, one gesture – a twin etymology unfolds, revealing, on the one hand, the environmental source and on the other the formal and iconographic code.” Subramanyan’s career, therefore as an artist and as a pedagogue shaped the narrative of Indian art practice during the  to 1990s. Supported by his parallel writings on art, built a legendary entity of modernism in Indian art.  His work is therefore cited as moments of an  of scholarship in art practice.

After multiple edifying visits to the west, returned to Santiniketan and joined Kala Bhavana as a Professor of the Painting Department in 1980. During this time, he produced some of the most meritorious works, one of them being the black and white mural on the Design Department of Kala Bhavana. R Siva Kumar writes, “The mural is a Gestaltist’s paradise. Enveloping the building with the efflorescence of nature, it both embellishes the building and denies its architectural geometry. The building is thus turned into a screen reflecting and underlining the vitality of the natural world that surrounds it. Its white on black images suggest a landscape etched in light, but its starkness is also ghostly. Like a photographic negative, it stands in for the natural, for the nature that has been displaced by the building, for what has been destroyed.”  Subramanyan’s proficiency in the  of a visual narrative secures  rhetoric, imbibed in the making of  art.

K.G. Subramanyan was made Professor Emeritus of Visva Bharati 1898, the same year when he retired. He was awarded the Padma Shri in 1975, Padma Bhushan in 2006, and Padma Vibhushan in 2012 by the Government of India, among many other prestigious awards and honorary positions from across the country.