One of the most iconic figures of modern Indian art of the mid-20th century, Jamini Roy’s reputation spilled over from the art world into a larger public and popular domain, and even as his name became synonymous in modern Indian art history with a reinvented "Bengali folk" style. 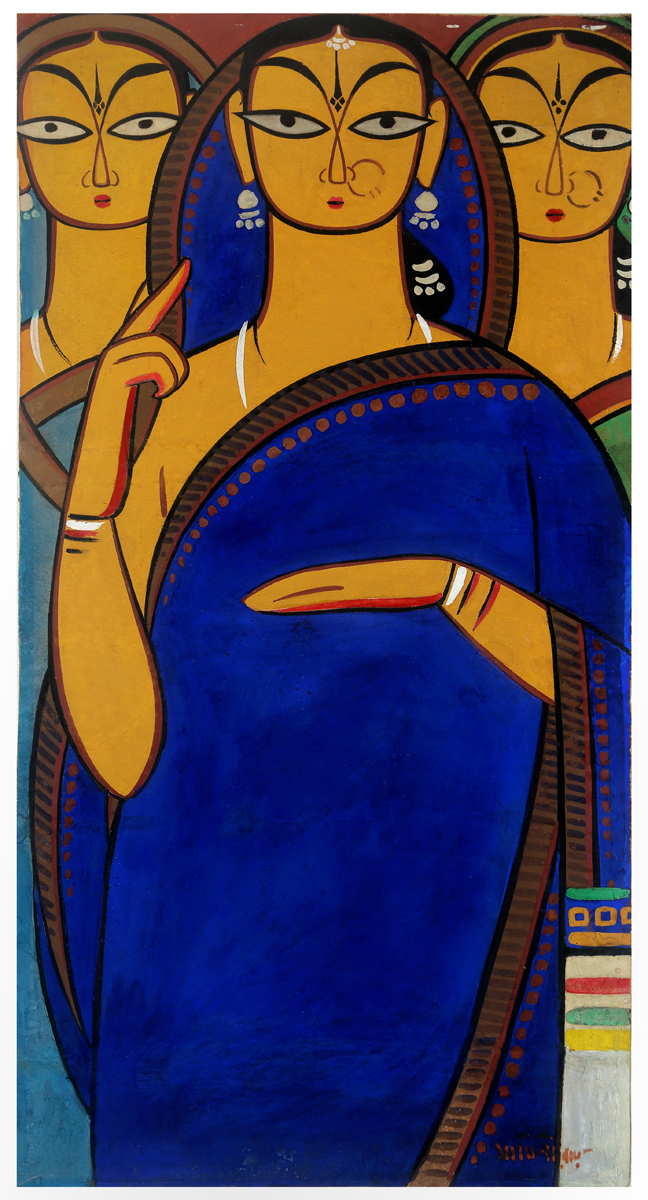 Jamini Roy was born in the village in Beliatore in the Bankura district of West Bengal in 1887. This rural birthplace would later assume a huge significance in defining the new turns in his art. His career as an artist began with his enrolment at age 16 in the Government School of Art, Calcutta, where he acquired a solid grounding in academic art. At the same time, his association with Abanindranath Tagore (the pioneer of the nationalist art movement), the art activities at the Jorasanko residence of the Tagores, and the Indian Society of Oriental Art generated his selective taste for "Oriental" painting. Jamini Roy's work from the 1910s and 1920s show the rich variety of his training and choices. He produced, on the one hand, a series of academic-style portraits and figural compositions in oil and, on the other hand, a set of romantic studies of the tribal Santhal women of eastern India that carry echoes of Bengal School mannerisms. Soon afterward he began experimenting with a new Post-Impressionist colorize genre of landscapes, using daubs and stipples of thick pigment. The decisive turn in his career came in the late 1920s and early 1930s, when the artist, overwhelmed by a "folk" nostalgia, rejected his bourgeois art-school-trained identity and retreated into an idealized world of the rural craftsman. This phase was marked by his periodic return to his village home in Beliatore, by his abandoning of oil painting, and by his new practice of grinding and mixing his own earth colors. This went hand in hand with his first forays into the pictorial tradition of the patachitras, taking him from a direct recreation of these folk motifs to the gradual invention of his own linear, decorative, colorful style. 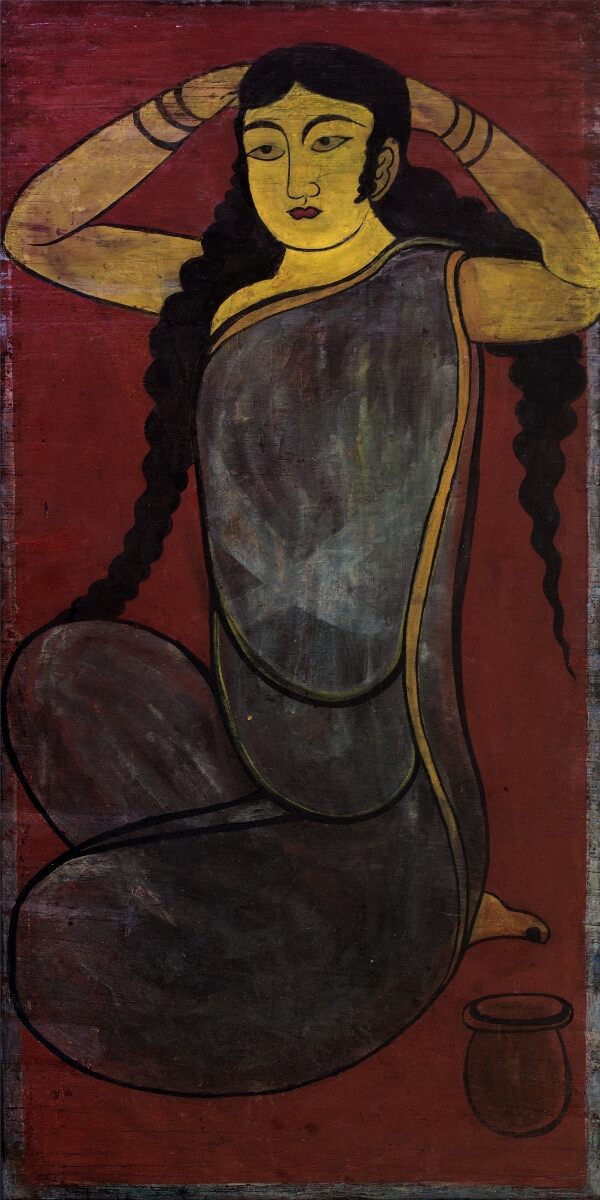 During the 1930s and 1940s, Jamini Roy's paintings serve to represent the passage of modern Indian art from its earlier academic and nationalist phases to new modernist and nativist phases. His new "folk" style, drawing heavily on the idioms of a range of local art forms (the rural patachitra, the Kalighat pat, the clay figurines, and the terracotta temple sculptures of Vishnupur), stands out in this period as a singular example of Indian primitivism, with Jamini Roy as a bearer of a New Left cultural ideology. A solo exhibition held at the Government Art School, Calcutta, in 1929, signaled the arrival of this new Jamini Roy. Thereafter, a number of shows organized in Calcutta set the stage for the making of the "master" and his unique "folk" style. Characteristic of Jamini Roy's work is the diversity of his stylistic experiments, ranging from his bold dark-lined brush drawings to his play with mosaic effects and the scheme of Byzantine icons. Equally distinctive are the different themes he delved into Santhal archers and drummers, baul and kirtan singers, or his series of paintings on Christ, the Krishna lila, the Ramayana, and some of his most striking portraits of the 1940s, such as those of Rabindranath Tagore and Mahatma Gandhi. Of all his themes, his feminine images-of gopinis, pujarinis, housewives, and mothers- emerged as the most favored, archetypal Jamini Roy motif: one that most powerfully captured the middle-class imagination of his times and made Jamini Roy a household name in Bengal cultural circles. 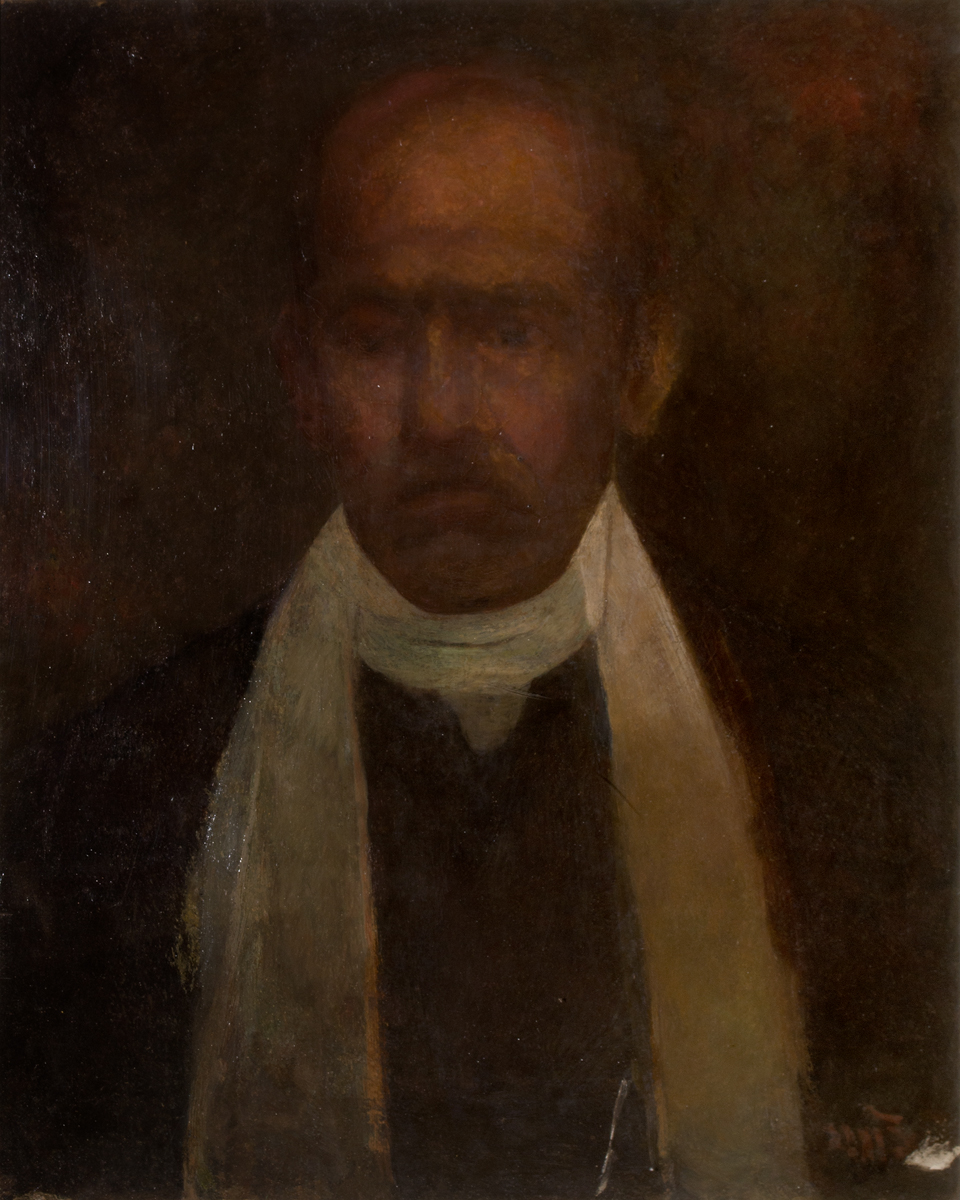 In the years around the Second World War and India's independence, the artist reached a high point of fame, as he came to be hailed by Bengal's left-wing cultural elite as the most creative and socially progressive of Indian painters. The paradox of the artist's career came in the 1950s and 1960s when he became a veritable picture industry, freely giving paintings to friends and admirers, frequently duplicating works to meet the mounting demands of the market, allowing his works to be widely copied by his own son. Meanwhile, the aging artist acquired an even greater legendary status – as he was awarded the national award, Padma Bhushan, by the Indian government in 1955 and elected Fellow of the Lalit Kala Akademi in 1956. A final consecration came after his death on 24th April 1972 – when, four years later, his works were granted the status of "national treasures" by the Government of India.

Chatterjee, Ratnabali, "The Artist in His Studio: Jamini Roy." Pp. 118-13 7 in From the Karkhana to the Studio: A Study in the Changing Social Roles of Patrons and Artist in Bengal ( New Delhi: Books & Books, 1990).